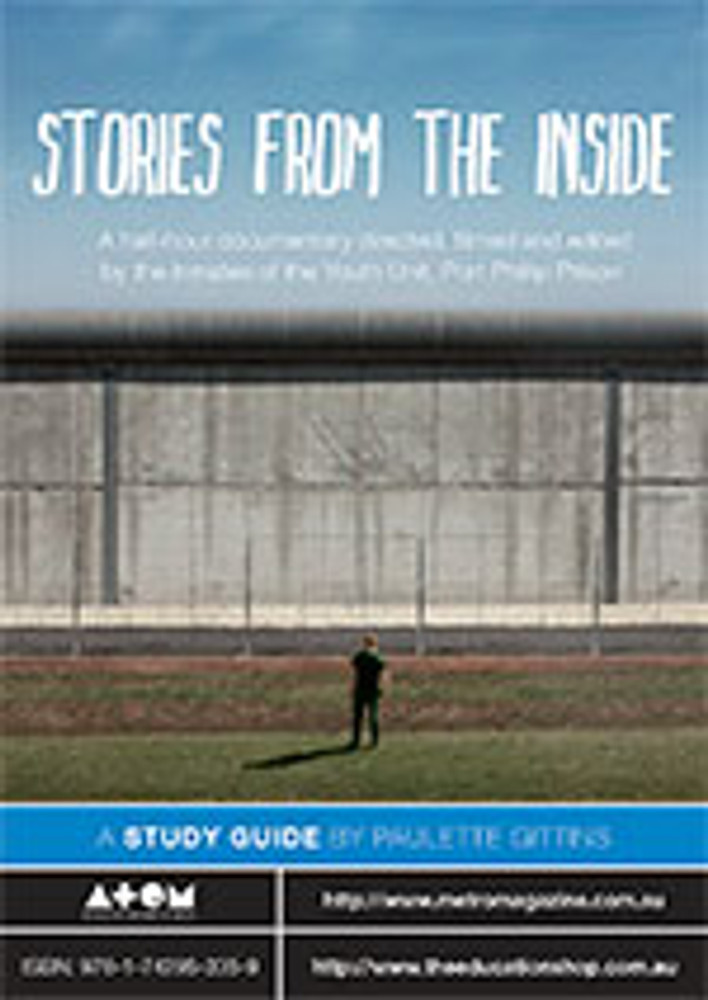 'Line up on that side of the yellow line. State your fill name and CRN [Criminal Record Number]. ' – Prison official

This, after a short bus ride, is the way life behind bars begins for all young offenders at Port Phillip Prison, Victoria. Life in prison is the focus of Stories from the Inside, a 2013 documentary about a group of young inmates in this maximum-security facility. Made in conjunction with the award-winning documentary team at Shark Island Productions, together with the not-for-profit organization Igniting Change, this documentary was made possible by unprecedented access to the inmates of the Youth Unit at G4S Port Phillip Prison, and is filmed, edited and directed by a group of prisoners inside the Youth Unit.

As we will see, it can be. As we are introduced to the environment of the maximum-security prison, seen through the eyes of a young inmate who has just been admitted, the camera journeys with him to close in on rows of identical cells, barred windows, locked doors, locked gates. Simultaneously we hear a series of different voices telling us how terrified, how isolated, how lonely everyone feels on first entering this place.

'The only real silence you get is at night when the lights go off ...' – Bruce

The prison operates on a rigid, impersonal set of rules that control every aspect of an inmate's life. From the initial removal of ordinary clothes and the regulation strip-search, to the head-count taking place four times a day, every day, individuality is extinguished and life is controlled in every way by officers. Everyone must conform.

All the inmates in this documentary are first-time offenders aged between eighteen and twenty-five. These young men have been motivated to tell their stories, to reveal the crimes that led to their imprisonment, the dangerous choices and mistakes they made as their criminal behaviour escalated, landing them eventually in jail, and the consequences of their actions on themselves, their families and their victims.

We will, as viewers, require some tolerance of the use of swearing and references to violent behaviour in this documentary. Expletives are beeped in the narrative and the young men who tell their stories often recount episodes of brutality.

Bruce, Luke, Oscar, Darren, Zac and Karl are six young inmates serving sentences of up to six years. Taking us on their life's journey to where they now reside in jail, we will see how it is the inflexible insistence on conformity, the lack of privacy, the sense of rejection by family, friends and the world at large that are the heaviest burdens to bear. The disgust Bruce feels at the individuals he must interact with is another grimly striking feature; Luke is still bewildered, almost incredulous, that he has actually been locked up; Zac is the one who focuses intensely on the damage and grief he has caused his victims; Oscar feels trapped – all are regretful, horrified and contrite over the emotional damage they have caused their families and victims.

The camera functions as an 'eye' recording the minutiae of daily life, the focus on locking and unlocking, the frequent interaction between prison officers and inmates, the rigorous routine, the tedium of every aspect of daily life, the ever-present sense of being shut in.

By the film's conclusion, the six inmates are moved to deliver a message to their audience, an on-screen declaration of responsibility for their actions:

We would like to acknowledge the victims, not only of our crimes, but all victims of crime and we hope that our participation in this film does not cause any further pain, grief or hardship.

Inside the G (ATOM Study Guide)

Inside the Firestorm (ATOM Study Guide)

Naked on the Inside (ATOM Study Guide)