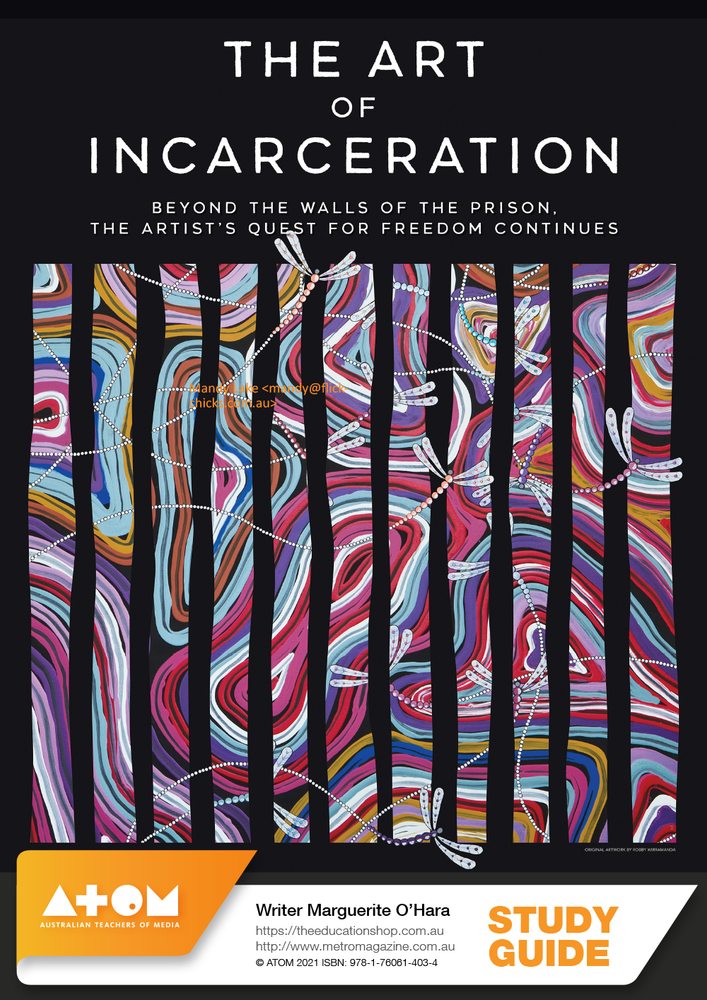 The Art of Incarceration follows three artists at different stages of their artistic development and 'rehabilitation'(both within the eyes of the system and within their own introspective consciousness). This narrative documentary both analyses and humanises the over representation of Indigenous Australians within the prison system, whilst seeking answers and striving toward solutions.

The film is an uncompromising insight into the inmate's quest for cultural identity and spiritual healing as they prepare for the annual Confined Exhibition (facilitated by Not-for-Profit organisation The Torch) and life on the outside. The Confined exhibition represents a middle ground between prison and society, providing the inmates with 'experiences that no one can take away from us, no matter how dark the times get'.

The Art of Incarceration was conceived out of a strong friendship between filmmaker Alex Siddons and Robby Wirramanda (a Wergaia man who served a 4-year in prison sentence for drug trafficking.) Together with Christopher Austin (a Gunditjmara Keerraaywoorrong man) – whom Alex met within the Indigenous unit of Fulham prison – they began a 16-month process of filming hundreds of hours of life inside the prison – and out of it. More recently, Uncle Jack Charles has joined the team (and his old friends) to lend his voice to an issue he feels very passionate about.

The film clearly and profoundly explores greatly misunderstood issues such as cultural disconnection, inter-generational trauma, addiction and institutionalisation. Through their artwork, they are able to express their feelings and develop a skill that they will be able to continue after they leave prison. In Christopher Austin's words, 'it gives you another direction'.

The film humanises and personalises the statistical information we read about Aboriginal rates of imprisonment and re-offending. At the same time, it shows how expressing their feelings and ideas through their artwork, offers a way to live differently and help others to use creativity as a means of reclaiming identity.

Important and inter-connected aspects of Indigenous History and Culture are illustrated and explored in The Art of Incarceration, not as a collection of statistics and general statements, but as they are reflected in the lives of many Indigenous Australians, including their ancestors, their families, their children and language and land groups.

The Art of Incarceration should start the conversation that Australia has neglected for far too long.

The film has relevance in a number of curriculum areas for secondary school students from years 9–12. Watching the documentary and responding, there are a number of different questions that could focus on different aspects of the story and students could respond to those that most interest them:

Relevant curriculum and subject areas raised in the film: