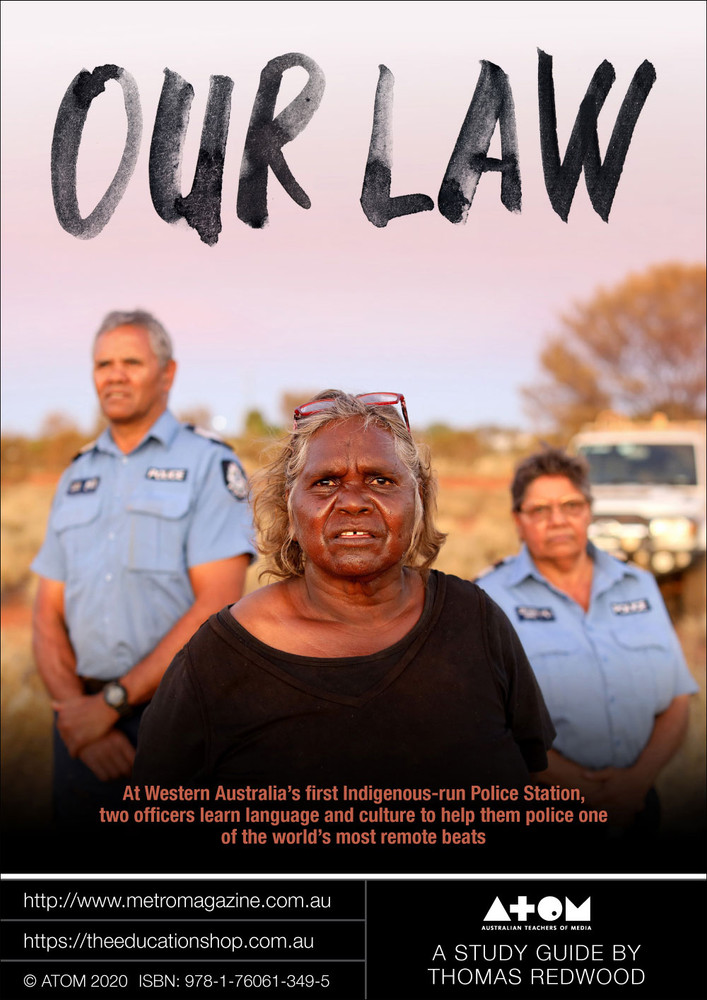 Our Law is a fascinating documentary about the differences and the similarities between Aboriginal Peoples and the possibility of respectful, reciprocal and culturally safe relationships between police and traditional remote communities. It concerns the pioneering work being done in very remote Western Australia at Warakurna's all-Indigenous run police station.

The Western Australian Police force admit that they have a troubled past when it comes to police work in remote Indigenous communities. The WA Commissioner Chris Dawson recently issued an apology on behalf of the Western Australia Police Force to Indigenous people, acknowledging that past wrongful actions that have caused immeasurable pain and suffering, and that police actions have significantly contributed to a traumatic Indigenous history.

Practical strategies like learning the local Aboriginal language and learning about how state and federal laws intersect with local Aboriginal Law have until very recently not been taken seriously by police in remote communities. At Warakurna police station (which opened in late 2017) a radically different approach has been introduced. The first ever all-Indigenous run police station in Western Australia, it is envisaged by the WA Police as a first step on a long road to changing their relationship with remote communities. The success of the station could pave the way for many more Indigenous-run police stations across Western Australia.

Warakurna officer-in-charge, Noongar man Senior Sergeant Revis Ryder hopes to inspire a new generation of Aboriginal police officers as he works hard to gain the trust of the remote Warakurna community. His enormous task is helped immeasurably by his football pedigree. Senior Sergeant Ryder previously played football for the WA league club East Fremantle and his celebrity son Paddy Ryder plays for Port Adelaide in the AFL. In a remote community where football plays a hugely important social function, Senior Sergeant Ryder is now the local footy coach, and on Saturday afternoons he marshals a group of roughly a dozen young men at the red dirt footy oval in the community.

Respected elder Daisy Ward has been encouraging Revis and Wendy's attempts to learn Ngaanyatjarra, teaching them words and practicing conversing in language with them, and they supplement Daisy's tutelage with books and audio lessons, which they can listen to in the Police vehicle on their long drives from Warakurna out the remote satellite communities. Both officers have a steep learning curve ahead of them when it comes to learning the intricacies of the local lore and Ngaanyatjarra language, as well as managing the day-to-day realities of isolated and remote outback life and police operations.

In order to police effectively, Wendy and Revis must learn to police in meaningful consultation with a remote Indigenous community still practicing the lore of one of the world's oldest living cultures. Revis and Wendy are showing how mutual learning and respect can and must replace the historical black and white law enforcement approach of the past.

Our Law can be linked to the following subject areas within the Australian Curriculum:

Love in Our Own Time (ATOM Study Guide)