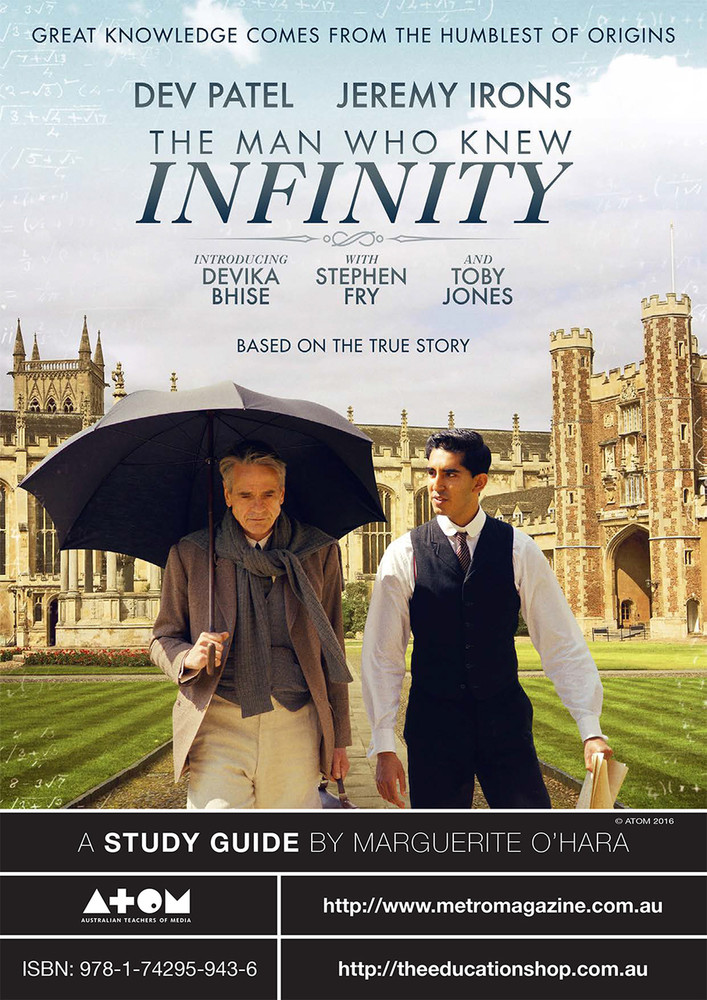 Short synopsis:
Written and directed by Matthew Brown, The Man Who Knew Infinity is the true story of a friendship that forever changed mathematics. In 1913, Srinivasa Ramanujan (Dev Patel), a self-taught Indian mathematics genius, travelled to Trinity College, Cambridge, where he forged a bond with his mentor, the eccentric professor GH Hardy (Jeremy Irons), and fought against prejudice to reveal his mathematic genius to the world.

Extended synopsis:
The Man Who Knew Infinity is the improbable true story of a unique genius whose pivotal theories propelled him from obscurity into a world in the midst of war, and shows how he fought tirelessly to show the world the genius of his mind.

The story begins in colonial India in 1913. Srinivasa Ramanujan is a 25-year-old shipping clerk and self-taught genius, who dropped out of college due to his near-obsessive, solitary study of mathematics. Determined to pursue his passion despite rejection and derision from his peers, Ramanujan writes a letter to GH Hardy, an eminent British mathematics professor at Trinity Colege, Cambridge. Hardy recognises the originality and brilliance of Ramanujan's raw talent and, despite the skepticism of his colleagues, undertakes bringing him to Cambridge so that his theories can be explored.

Ramanujan leaves his family, his community and his beloved young bride, Janaki (Devika Bhisé), to travel across the world to England. There, he finds understanding and a deep connection with his sophisticated and eccentric mentor. Under Hardy's guidance, Ramanujan's work evolves in ways that will revolutionise mathematics and transform how scientists explain the world. Hardy fights tirelessly to get Ramanujan the recognition and respect that he deserves, but in reality he is as much an outcast in the traditional culture of Cambridge as he was among his peers in India. But Ramanujan fights illness and intense homesickness to formally prove his theorems so that his work will finally be seen and believed by a mathematical establishment that is not prepared for his unconventional methods.

Curriculum guidelines:
The Man Who Knew Infinity would be suitable for middle and senior secondary students and has relevance to studies of English, History, Mathematics, Values Education and Ethics, and Film and Media Studies.