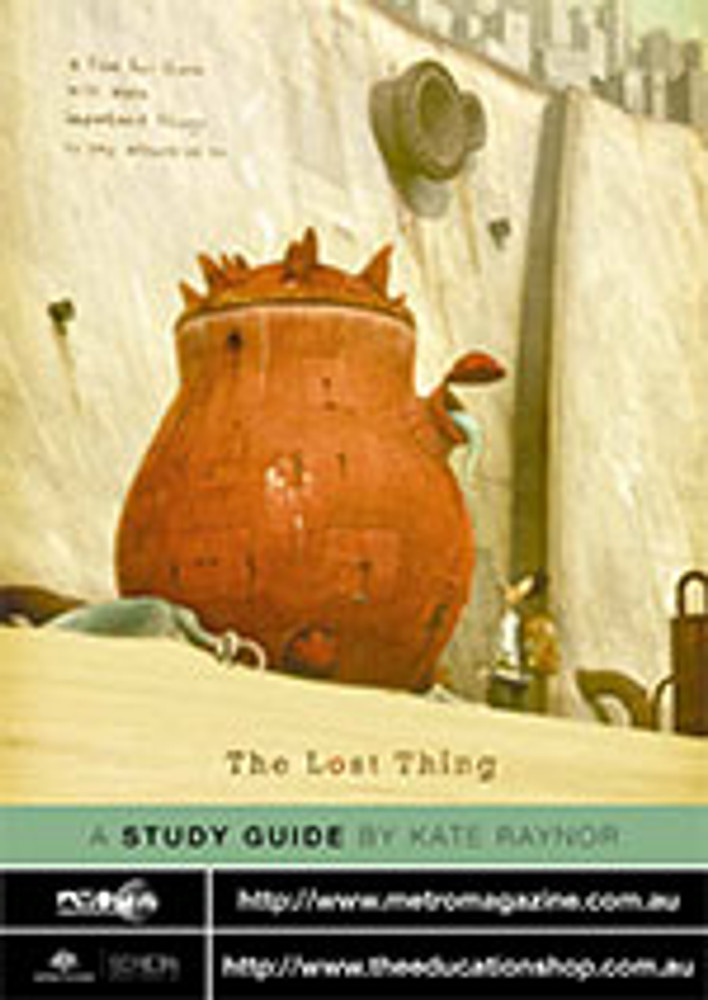 The Lost Thing is a fifteen-minute animated short film co-directed by Shaun Tan and Andrew Ruhemann. Narrated by performer Tim Minchin, it brings the unique vision and talent of multi award-winning author and artist Tan to the screen, and tells a strange and compelling tale. A boy discovers a bizarre-looking creature while out collecting bottle tops at a beach. Realising it is lost, he tries to find out who owns it and where it belongs. Everyone the pair encounters seems indifferent to their problem. People barely notice the Lost Thing's presence; strangers, friends and parents are all unwilling to entertain this uninvited disruption to daily life. They are all 'too busy doing other stuff'. For reasons he does not explain, the boy empathises with the creature; he is determined to find a place for it.

They visit the home of the boy's friend, Pete, an amateur scientist who makes an unhelpful assessment: 'It doesn't belong to anyone, and doesn't come from anywhere.' The boy then takes the creature home, but his parents demand that he return it to the beach. Feeling sorry for the Lost Thing, the boy decides to hide it in the backyard shed until he can figure out what to do next.

After noticing a government advertisement on late-night TV, the boy leads his companion to the Federal Department of Odds and Ends, an institution that claims to deal effectively with 'things that just don't belong'. It's a bleak, windowless edifice that seems to contain little more than a receptionist and a large filing cabinet. The boy is ordered to fill in a huge stack of forms.

From the quiet darkness, a less than human-looking janitor appears, urging him to leave the departmental building. He presents the boy with a business card featuring a white arrow, and then disappears into the shadows. Together, the boy and the Lost Thing search for this cryptic symbol. They find it scattered throughout the city, forming a trail that leads to a forgotten back alley and a tiny key protruding from an otherwise featureless wall.

With a turn of the key, the wall slides open, revealing a vast landscape of surreal objects and creatures engaged in a variety of whimsical activities: playing games, telling stories, drawing pictures, making music and flying kites. In stark contrast to the drab tones and ordered feel of the city, this is a world of kaleidoscopic colour and movement. The Lost Thing is keen to enter its new home, though not before saying goodbye to the boy with an unusual gesture of appreciation. The boy stays behind, the door closes and darkness returns.

In a brief epilogue the boy, now an adult in this world, reflects on his memory of the Lost Thing. Dressed as an office worker and catching an evening tram, he laments the fact that he doesn't notice lost things anymore – even as we see a strange, luminous creature passing by. He is 'too busy doing other stuff', and we are left with this thought as he recedes into an ocean of other commuters.

The Lost Thing operates on many levels and has the power to really grip students' imaginations with its haunting atmosphere and stunningly detailed visuals. A beautiful, magical film, it could be a wonderful learning resource in a wide range of settings and across both primary and secondary levels. A bonus for the classroom is its brevity: at just fifteen minutes, it doesn't place too great a demand on the already crowded curriculum and allows for repeat screenings.

The main aim of this guide is to present a variety of teaching and learning opportunities based on the film. Given the range of ages that could use this film, activities are deliberately varied in their degrees of sophistication and complexity. Teachers are encouraged to pick and choose tasks that suit the particular interests and abilities of their students, and the time frames within which they are operating, rather than working through the

Do or Die: Lost at Sea (ATOM Study Guide)