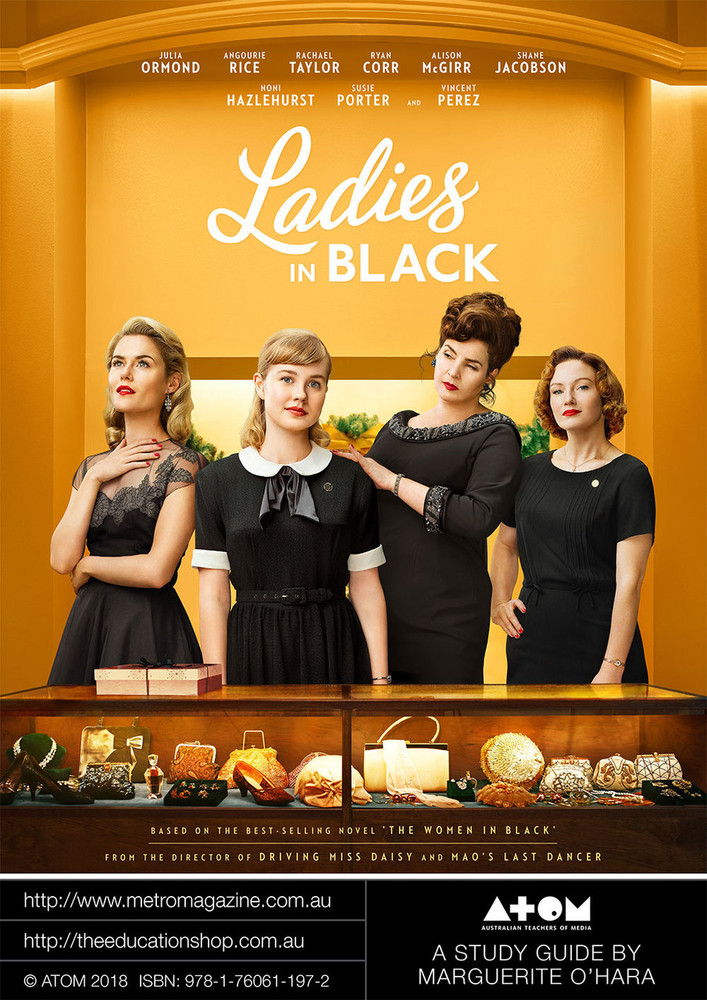 NB: This product includes the Ladies in Black ATOM study guide as a PDF and as an EPUB, which can be used on mobile devices.

As 1959 and the restless post-war boom decade draws to a close, shy Lisa Miles (Angourie Rice), 16, takes a summer job at the grand Sydney department store Goode's, while awaiting the results of her final school exams.

There she meets the 'ladies in black' of the 5th floor; Fay Baines (Rachael Taylor) and Patty Williams (Alison McGirr), who work in Ladies’ Cocktail; and the elegant but aloof Magda Szombatheli (Julia Ormond), who manages the Model Gowns high fashion boutique.

Lisa is initially entrusted to Fay and Patty, and the slightly awkward young girl who wears clothes made by her mother Mrs. Miles (Susie Porter), is targeted with their casual disdain. Slowly, though, Lisa begins to reveal her intelligence and quiet self-belief to her co-workers in Ladies’ Cocktail, as well as to Miss Cartwright (Noni Hazlehurst), the buttoned-up but highly capable fashion department floor supervisor.

Lisa and her great potential are most recognised, however, by Magda, who escaped her native Slovenia in the political maelstrom following World War Two. She landed in an Australian refugee camp, where she met her dashing Hungarian husband Stefan (Vincent Perez), and where she reoriented herself to this strange new place. Her tenacity and her stories about working in Paris before the war landed her an enviable position at Goode's.

Lisa's goal is to attend the University of Sydney, if she can convince her stubborn father Mr. Miles (Shane Jacobson) to sign her scholarship application. Mr. Miles sees no point whatsoever in higher education, especially for women. Lisa wants to be a poet or an actress, and Magda recognises a fellow creative spirit in the girl.

Magda begins to teach Lisa about style, introducing her to European culture. Lisa falls in love with 'Lisette', an elegant creation in Model Gowns that speaks to her of confidence and boldness.

As Lisa grows from a girl into a self-assured and positive young woman, she herself becomes a catalyst for change in the lives of the ladies in black; Fay, disillusioned by Australian men, is introduced to Dostoyevsky's novel Anna Karenina by Lisa and to the debonair Hungarian Rudi (Ryan Corr), opening a door to her own self-awareness; and Patty finds a way to embrace her physicality and reignite the passion with her distant husband Frank (Luke Pegler).

Ladies in Black would be suitable for middle and senior secondary students. It presents a story from almost sixty years ago set in Sydney at a time in Australia when society was changing and women were embracing the opportunities for changes in their lives.

This is Australian history of the immediate post-war years when many young women's lives changed as they were better educated (stayed at school longer and/or moved on to tertiary education) and less inclined to accept the often repressive and authoritarian aspects of a patriarchal society. While marriage, having children and living a stable life in the suburbs remained the goal of many young women, others were looking for something more than this – higher education, financial independence and choices about their future.

The film's story explores several aspects of a changing society, partly through the world of the department store and those who worked there, and also through looking at the different way of life of recent arrivals from Europe who enriched Australian life and culture. At Year 10 level, students study aspects of the modern world and Australia. One study (ACDSEH144) focusses on the migrant experience. Students look at the waves of post-World War Two migration, investigating the countries that were the source of migration. They also look at the contribution of migration to Australia’s changing identity as a nation (ACDSEH147).

By reading stories, looking at photos and watching films and documentaries set in earlier times and places, we can begin to understand why living in Australia has changed so much since the middle of the twentieth century. The 1960s are often characterised as a decade of social changes, not just in Australia but in many other countries. Ladies in Black uncovers how some of those changes affected a small group of women and men in Sydney as Australia moved into the 1960s. Education, migration from Europe, the increased availability of the contraceptive pill, the beginnings of teenage culture and identity and a general relaxation in life after the war years when rationing and stringent economic and social controls limited the opportunities for adopting real change.

Relationships between men and women began to change as more girls and women stayed at school longer, went on to further study or worked in jobs alongside men, as many had during the years of World War Two. While not a lot of women could claim complete financial independence in the late 1950s and 1960s, there were the beginnings of calls for equal pay and for child care, the two things that enable women to live fulfilling and independent lives, whether married or single.