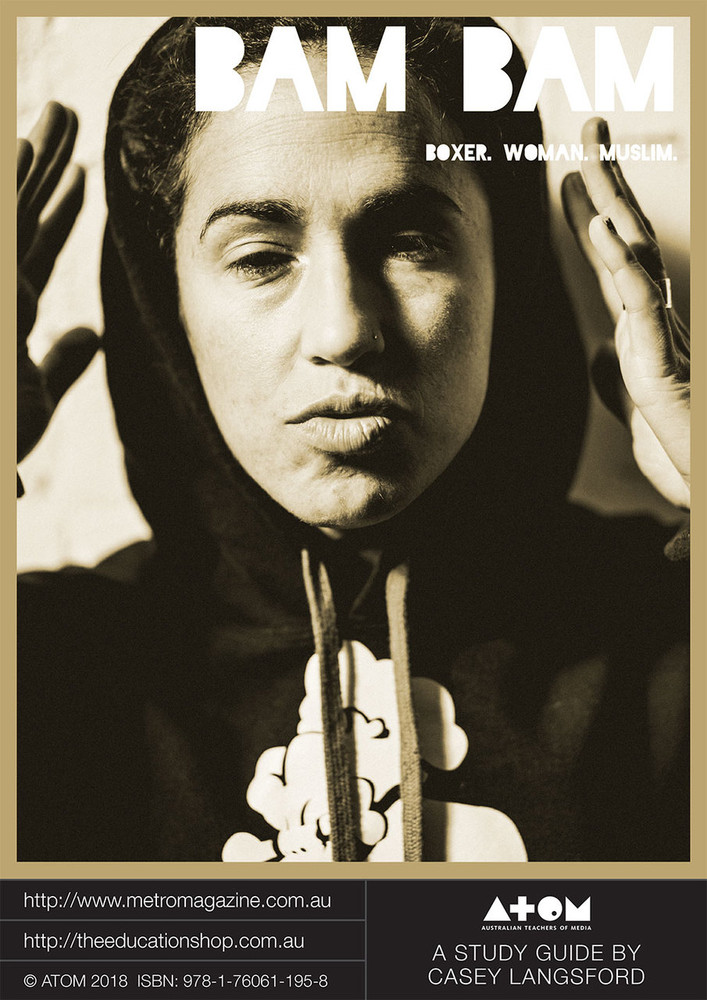 NB: This product includes the Bam Bam ATOM study guide as a PDF and as an EPUB, which can be used on mobile devices.

The brutal, extreme culture of World Championship boxing, seen through the eyes of a woman. A Muslim Lebanese woman. Amateur boxer Bianca 'Bam Bam' Elmir, two time Australian Flyweight champion and Oceania champion, 'Bam Bam' aims to win gold at the World Championships. But first Bianca must qualify at national level in a subjectively scored sport. Her outspoken nature, and propensity for public attention are a source of malcontent resulting in animosity from Boxing Australia. At her 2014 qualifying attempt she is unfairly judged, Boxing Australia seemingly determined not to allow her a pass to the World Championships. Her next opportunity is two years away.

Lebanon 1985, Bianca was kidnapped from her father, by her mother, Diana. They escape to Canberra, Australia. A difficult adolescence results in a tumultuous mother-daughter relationship, and a rebellious Bianca taking up boxing, hell-bent on a quest to prove herself. She meets her Northern-England larrikin coach, Garry. Not only coach and mentor, he is pseudo family.

Facing opposition on all fronts, from her conservative Islamic family, from the male dominated sport in which she fights and as a migrant in white Australia, 'Bam Bam' brazenly tackles opposition. She defies anyone who makes her conform, declaring, 'boxing gives me an excuse not to be normal.'

Despite ongoing dissonance within her family, spirituality resonates for Bianca. Finding her own expression of Islam becomes a grounding force amidst the setbacks and barriers. Bianca explores the shadows of who she is, her fears and loneliness. She reaches deep to focus upon the 2016 World Championships and she qualifies. She is set to represent Australia in Kazakhstan.

This is not Bianca's first World Championships. In 2012, she qualified and was considered one of Australia's best medal hopes. However, Bianca tested positive to a banned substance. She is dropped from the Australian team and stripped of her 3rd national title, resulting in a 12 month ban.

On returning to competition, 'Bam Bam' is targeted by the Australian Sports Anti-Doping Authority. The testing forces her to take on excess liquid which, in a weight governed sport where boxers undergo severe dehydration to 'make weight', risks her not weighing in at her nominated division, and thus not competing. The process is gruelling on body and mind.

Surviving the setbacks, the rumours, the drug ban and the opposition, it is 2016 and Bianca is representing Australia at the World Championships. She is living her dream. But the dream is illusive. Careening face-to-face with her own shadow, 'Bam Bam' accepts her own self-worth – 'I am me & I am enough'.

Bam Bam is a beautiful, ballsy film that packs a punch. It challenges stereotypes and digs deep to rise the dream in all of us to fight back, to be great and to prove that we can, no matter the barrier.

Bam Bam can be linked to the following subject areas in the Australian Curriculum as well as connecting with the General Capability of 'Intercultural Understanding':

Bam Bam is also available to purchase on DVD here and available for streaming here.