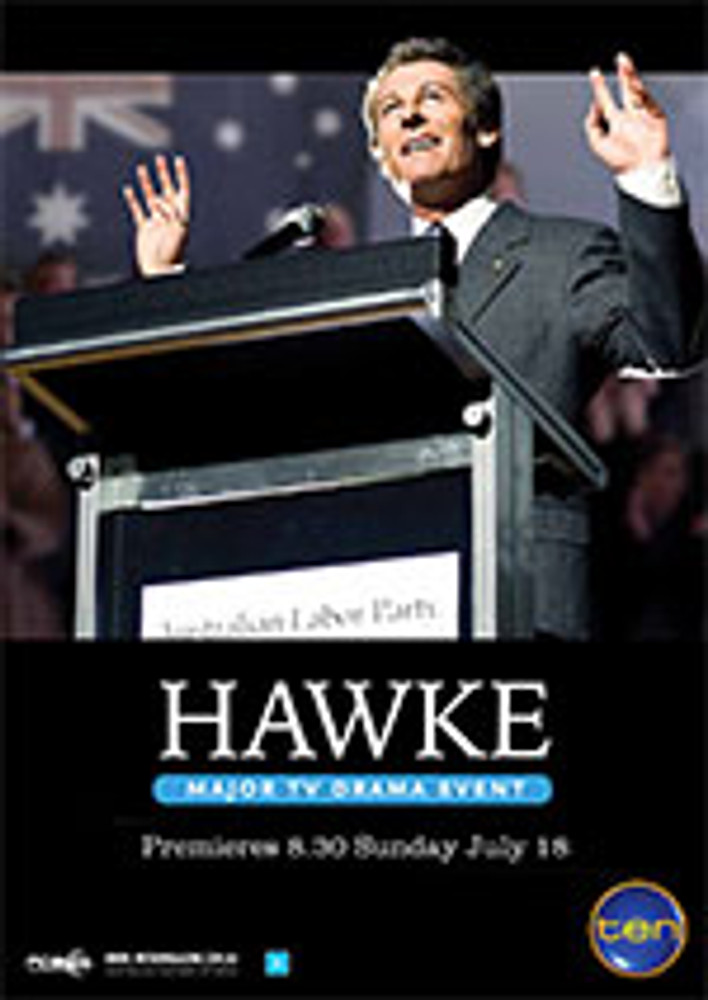 Hawke is a 95-minute feature film biography of Bob Hawke.

With eight years in office, Hawke was Australia's longest-serving Labor prime minister. He became prime minister after only two years in parliament – and only one month as leader of the Opposition.

Building on his success as president of the Australian Council of Trade Unions, Hawke reached a consensus among the government, unions and business to stabilise wage growth, to improve the ability of business to compete in global markets and to deregulate the Australian economy and promote growth.

How do you depict these achievements but still focus on the person himself? That's the challenge that Hawke addresses.

December 1991. Australia's prime minister, Bob Hawke, is in a secret meeting with his six closest ministers, including his faithful friend and surrogate son, Kim Beazley. Despite their unwavering loyalty, they want him to step down. The battle with his challenger, Paul Keating, is destroying the party. But Bob refuses to bow to the Keating challenge.

1977. Sideburns. Gaudy suits. Cigars and Fosters. The brilliant, fiery, workaholic president of the Australian Council of Trade Unions is hailed by some as the nation's messiah. Some say he's already running the country. As a star negotiator, his big talent is helping warring factions find common ground – and seducing women, including the young novelist Blanche d'Alpuget. Despite his talents, Bob fails to weave his magic on the Labor Party, clashing with its leader, Bill Hayden.

However gifted Bob may be, he seems hell bent on self-destruction, with his drinking continuing to worsen. His long-suffering wife, Hazel, can no longer bear the humiliation. She knows all about his affairs and wants a divorce. Fine with him. Bob buries his lifelong dream of entering politics and proposes to Blanche, who accepts. But his mother, the formidable woman who believed – even before he was born – that he would one day lead the country, dies. It's his destiny. And with Liberal prime minister Malcolm Fraser dividing the nation, the time is now. But if Bob's going to run, he'll need a loving wife by his side. Hazel, still in love with him, agrees to stick with him. In return, Bob vows to give up the booze and women.

Blanche, having already abandoned her own husband, is distraught. But after licking her wounds, she decides to write Bob's warts-and-all biography, giving the country an intimate understanding of their future leader. The book is a huge success, and Paul Keating agrees to support Bob in a bid for the leadership in return for his own 'go' when Bob's had his turn. Bob's popularity soars, helping him overthrow Bill Hayden and carry Labor to a landslide victory in 1983, flanked, of course, by his new treasurer and loyal partner, Paul Keating. Together they introduce some of the most stunning economic reforms of the century, and Bob's popularity reaches an all-time high. Australia loves him and he loves them.

Then, his private life implodes. His youngest daughter is addicted to heroin and, having just given birth, close to death. Bob, devastated, blames himself. For the first time he's forced to confront how his former lifestyle affected those closest to him. Meanwhile, Paul, initially happy to pick up the slack, becomes unsettled by Bob's personal issues, growing increasingly impatient for the top job. But after healing his family, Bob – with a new sense of humanity – is determined to stay on. He still has things to do on the world stage.

As Bob fights to maintain the leadership in the days before Paul's challenge, we witness the 1988 leadership pact at Kirribilli House, the prime minister's Sydney residence. Bob attempts to buy peace by secretly agreeing to hand over power after the 1990 election. But after 1990, Bob stalls, forcing an infuriated Paul to use tough tactics. Bob calls Paul's actions treachery a

Hawke - The Larrikin and the Leader (ATOM Study Guide)