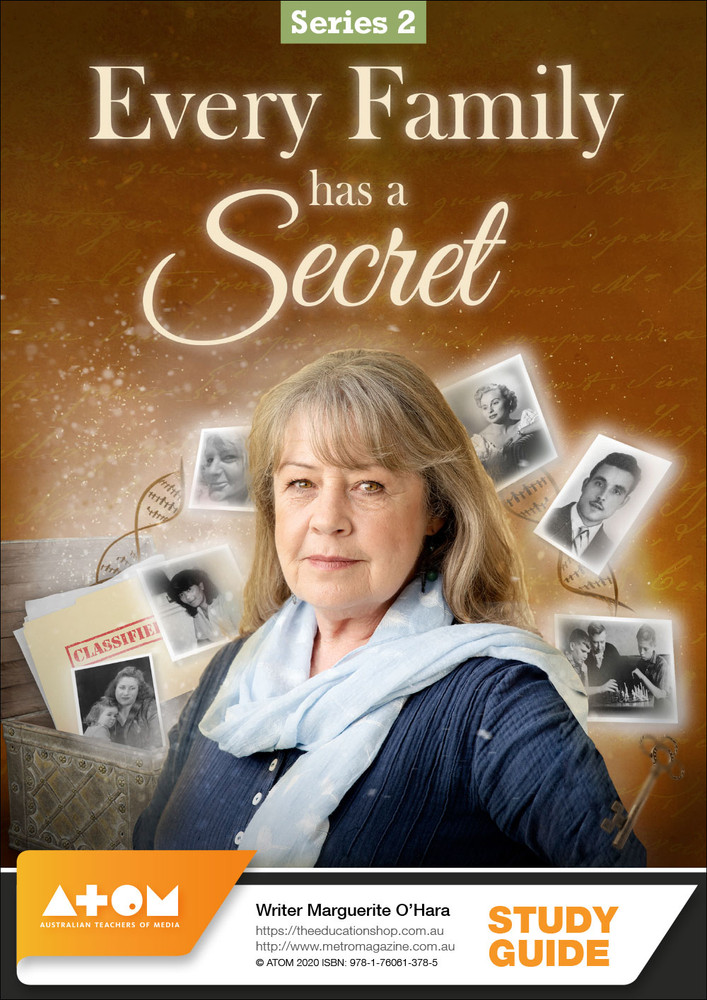 Every Family has a Secret - Series 2 (ATOM Study Guide)

In Every Family has a Secret – Series 2, Perth woman Ellis Treleaven has realized that her real identity has been kept from her for more than half a century. Ten years ago, Ellis discovered a birth document which reveals her father was not her dad and that she wasn't born in Amsterdam, but in fact in a Czech 'concentration and transit camp' with her father listed as 'unknown'. Ellis will travel to the Netherlands and discover why her mother lied to her, who her father is and how she came to be born in one of the most dangerous places on earth.

Perth nurse Marie O'Connor says her mission is to understand who she truly is. She has spent a lifetime without her Italian father by her side. She was told by her mother's Lithuanian family that her dad was responsible for the death of her brother Aldo in the days prior to Marie's own birth and that he was 'a bad man'. She will learn about the unexpected role her father played in her brother's death and discover new family on a different continent.

40-year-old Matthieu Heimel was born in the Philippines and placed in an orphanage at a young age. He was adopted by a French family and has since moved to Perth and become an Australian citizen. DNA testing led him to his African American father, who he has recently met for the first time. His search for his mother took an unexpected turn when he was told that she too had moved to Australia… but is listed as missing, presumed murdered. Now Matthieu is determined to find out what happened to his mother. Is she alive with a new identity or dead, and if so, what were the circumstances around this tragedy?

Sydney woman Kerry Stevenson believes her mum kept secrets. Whilst known by several names, prior to her second marriage, her mum Joanne Stevenson supposedly led a glamorous life as a Hollywood actress, dancer and model. Joanne told her daughter that on her death she would inherit eight Picasso paintings – supposedly gifted during her jet-setting days by the famous artist. The paintings were later valued and found to be copies. Now Kerry wants to separate fact from fiction. What else was her mother lying about and what secrets did she keep?

Elizabeth Brierley knows her sex worker mum Louise McLaughlin was several months pregnant with her when her boss, brothel madam Shirley Finn was murdered in Western Australia. Her mother provided an alibi to a suspect on the night of the suspected contract killing and, in the days following helped organize Shirley's funeral. Elizabeth's mother died before Elizabeth could discover the identity of her father who she suspects may be one of the corrupt police involved in the murder investigation. It's a story which ends with an unexpected conclusion and reunion.

Australian man Paul Morris wants to discover if his father was a Russian spy. Paul has felt estranged from Australia since his father David Morris was publicly named at the Royal Commission on Espionage in 1955 following the infamous Petrov Affair. It led to David Morris ultimately moving Paul and the rest of his family to China and then the Soviet Union. But was David Morris simply a card carrying Communist, or was he a traitor to his country?

Personal and Social Capability is a cross curriculum priority that relates to many subject areas. This priority across a range of subject areas could include exploring:

Students studying Modern History, Family History and post-World War II Migration would find much to explore in these programs to develop their understanding of how Australia became a multicultural nation through following the stories of people whose parents were often products of turmoil around the world. There is also reference to the difficulties faced by Indigenous Australians removed from their families and brought up in state care, and the effect of family removal to institutions has on the following generations. The post-World War II years of the late 1940s, 1950s and 1960s in Australia were times of changes in social attitudes and population growth through immigration. They were also times when many people believed that what happened in a family should stay private.

Students in middle years studying Australian History. Some of the themes explored in the series:

Series such as Every Family has a Secret tend to be much more respectful and careful with how they reveal secrets and family complexities. At the same time, they are entertaining, filled with real drama and surprising for both participants and viewers. They demonstrate that truth is often stranger than fiction and often more interesting and compelling viewing.

ATOM has also produced a study guide for Series 1 of Every Family has a Secret. The Series 1 study guide is available for download here.

Every Family Has a Secret - Series 3 (ATOM Study Guide)