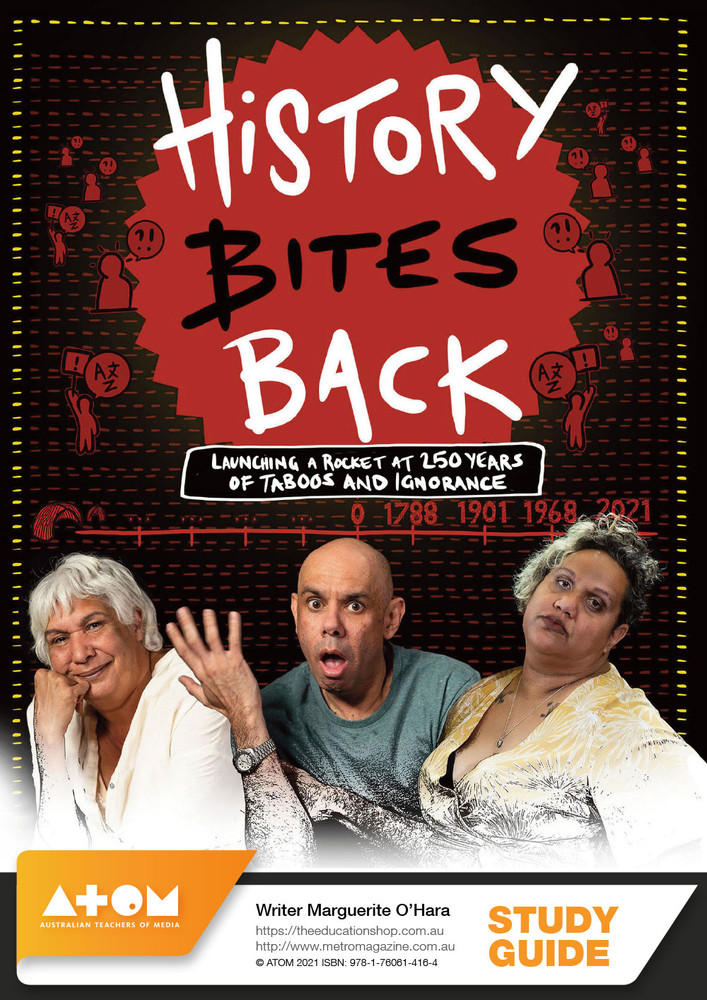 History Bites Back is a one-hour, presenter-led documentary designed for a modern audience to be segmented into bite-sized episodes for additional online streaming options.

There are several different ways to show the realities of life for many Indigenous Australians on film and History Bites Back is one way. It is a very direct look and refutation of public attitudes as they are often expressed on social media in throw-away lines. It's comical, self-aware, and not afraid to launch a rocket into taboo issues. There are many areas of First Nations People's lives that illustrate how much of what 'others' mostly take for granted is not automatically available to Indigenous Australians in the same way. These are four of the inequities exposed in this program in relation to Indigenous Australians, but there are many others:

Very few Australians from non-Indigenous backgrounds have any direct contact with Aboriginal and/or Torres Strait Islander people. Their understanding of how the lives of others are different to their own, largely based on their ethnic backgrounds and opportunities, is often quite slight.

Aboriginal filmmaker Trisha Morton-Thomas (Destiny Does Alice, Occupation: Native) teams up again with comedy director/writer, Craig Anderson (Black Comedy, Occupation: Native), and some of Australia's freshest comedic talent (Steven Oliver and Elaine Crombie) to bite back at negative social media comments and steer the conversation to look into the historical context of the fortunes and misfortunes of Indigenous Australians from social security, citizenship and equal wages to nuclear bombs and civil actions.

History Bites Back would be suitable for students in Years 4–12 studying:

The issues raised are discussed in accessible and clear language. They offer perspectives on several areas that affect how people can live their lives and easily access the services provided by the Federal and State Governments.

This film could also be used to explore new Science elaborations in the Australian Curriculum, including the acknowledgement that Aboriginal Peoples and Torres Strait Islander Peoples have worked scientifically for millennia and continue to contribute to contemporary science. They are scientifically rigorous, demonstrating how Indigenous history, culture, knowledge and understanding can be incorporated into teaching core scientific concepts.

Coming Back Out Ball, The (ATOM Study Guide)