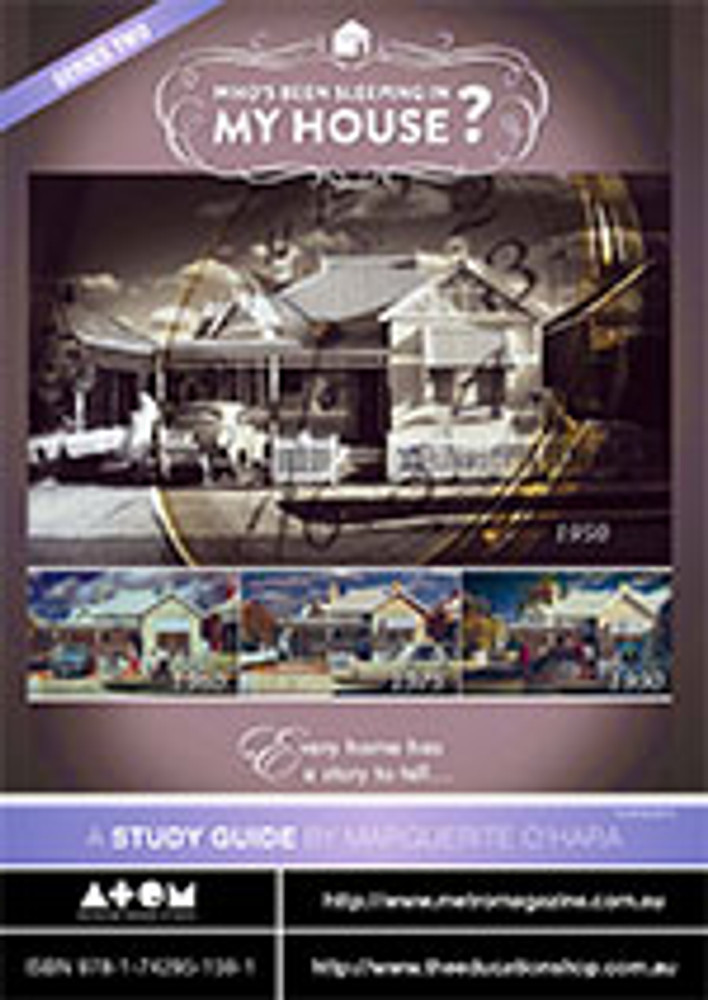 Who's Been Sleeping In My House? Series 2 (ATOM Study Guide)

Have you ever wondered about who lived in your house before you? Who were they? Where did they come from? What were their dreams, hopes and fears? And what became of them? Who's Been Sleeping in My House? is a series of eight thirty-minute episodes that sets out to reveal the incredible stories that lie between the bricks and mortar of our homes.

Leading each week's investigation is Melbourne-based archaeologist Adam Ford. His inquisitive mind, twenty years' experience and storytelling skills make him a natural and engaging host. We follow Adam as he zigzags his way through archives, databases, family albums and local experts, revealing a past that isn't always recorded in the history books.

From Western Australia to inner-Sydney Paddington to Toowomba in Queensland, Adam peels back the extraordinary lives of everyday Australians – people who lived, loved, bore children and died or moved on in the great cycle of life – each intriguingly diverse, but all unified by the place they called home.

The walls really do talk, and you may never look at your house in the same way again.

Series 2 highlights of this unique Australian series include the bizarre story of a fugitive British MP who allegedly hid out in a Victorian family attic, a clandestine radio station that was suspected of broadcasting wartime secrets from the suburbs of Adelaide, a mysterious spy who was reportedly captured while on reconnaissance in the hills of Perth, the rumour of a baby who was snatched from a quiet Toowoomba street, the remarkable legacy of an eccentric Sydney millionaire and the chilling tale of one of the few women to be sentenced to death in Australia.

Who's Been Sleeping in My House? would be an excellent series to show to upper primary and secondary students of History.

Who's Been Sleeping In My House? Series 1 (ATOM Study Guide)