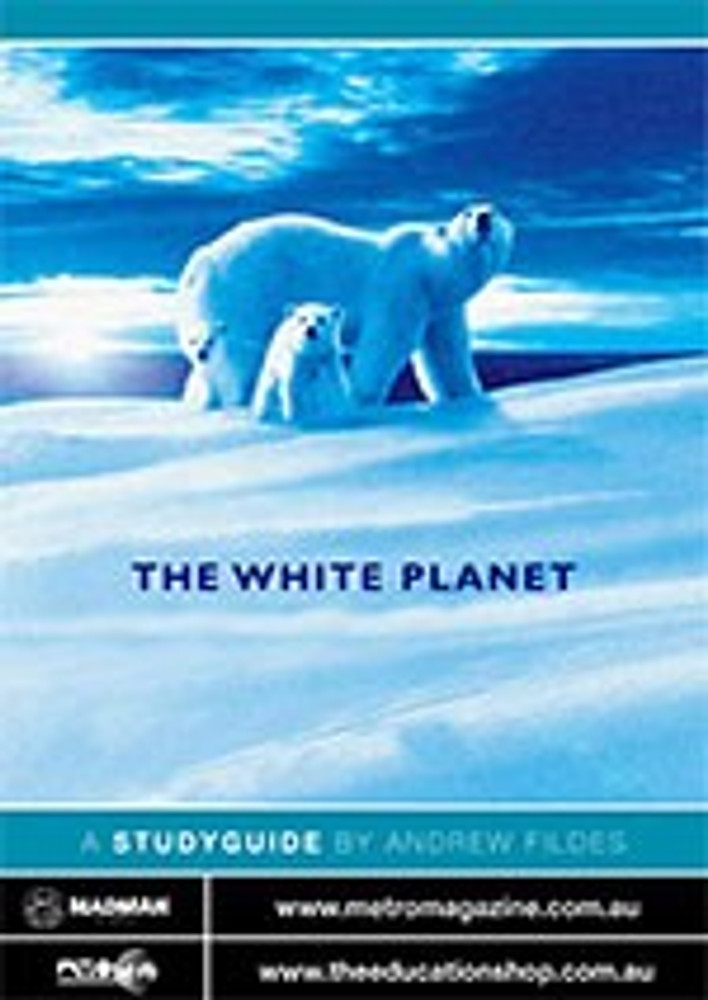 Unlike many recent nature documentaries, The White Planet focuses on the ebb and flow of life in the entire, frigid system of the north. While there is much concern about the rate of melting in the Arctic Circle, here we see only the lives of the creatures that thrive and survive in the planet's refrigerator. It is a classic nature documentary that does not force an environmental message down your throat but simply shows the natural treasures of the Arctic and allows them to speak for themselves as huge slabs of ancient ice crash from the melting glaciers. It is a starting point for discussion with older students and a wonder for the young, with stunning images of birth, motherhood, companionship and the struggle for survival in a truly hostile environment. A gentle reminder of what we stand to lose; with the viewer, and the teacher, left to explore the implications.

Music based on native rhythms both soothes and inspires as we see a polar bear giving birth in her icy den; a family 'pod' of ghostly, white beluga whales swimming in families; narwhal males waving their unicorn 'horns'; tusked walrus rolling on the cold, summer beaches; the young male musk oxen colliding, head-to-head in shattering impacts. Great herds of caribou trek across the northern landscape to their summer feeding grounds and guillemots hurl themselves into the ocean after fish, flying in air at one moment and water the next.

Students often confuse the two poles and some may expect to see penguins. They won't, but they will see birds that look very much the same and which can fly in air as well as water. The seals and humpbacks will be familiar but the small whales are remarkable, and remarkably different. This is not an ice-bound continent but a landscape of floating ice ringed by stark, black, snow-dusted cliffs in winter and beautiful forested fiords in summer. As we see, the animals don't avoid the ice but depend upon it, the bears actually unable to hunt during the summer melt. And unlike the southern pole, this is an inhabited land although no humans are allowed to intrude into this film. While the Antarctic is a land of marine dependant creatures, the Arctic has been colonised by land mammals as well. It is possible to consider the ways in which these quite different species have found similar ways to survive in the north and south and even adapted into similar shapes and lifestyles under the pressure of the cold.

However you choose to use the film and with whatever age group, the scenery and photography overwhelms. You may never wish to share an ice floe with a walrus but you'll never regret the sight of them waving their tusks in the air. The fate of the lovely little lemmings may sadden you and your students but they are the basis of life for a range of wonderful hunters.