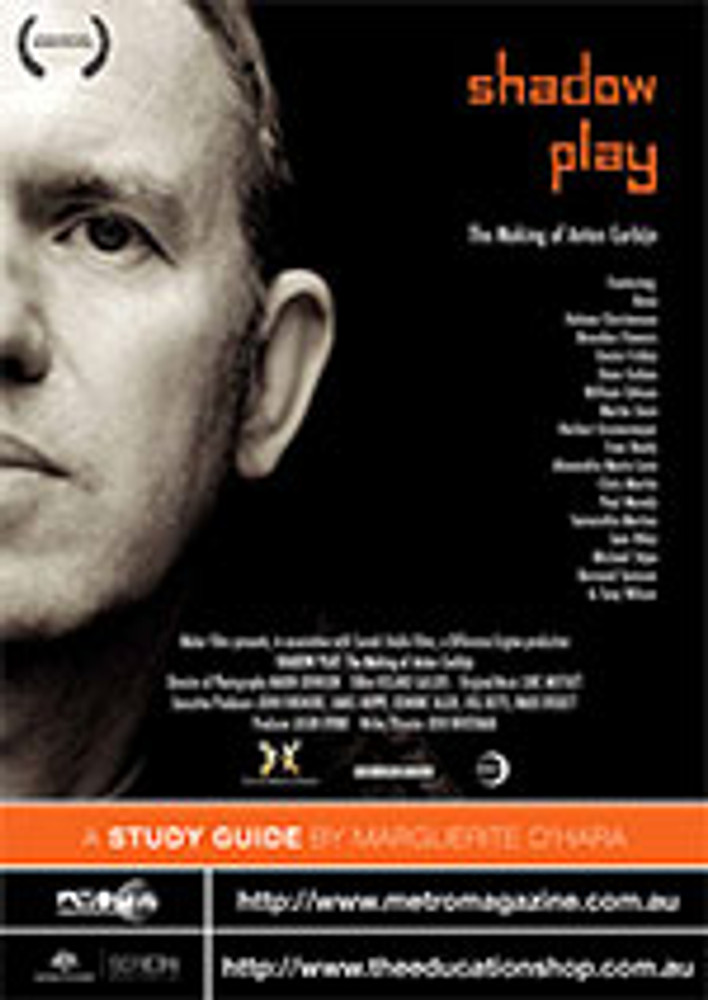 Shadow Play is a 75-minute documentary about Dutch photographer and filmmaker Anton Corbijn, regarded by many as one of the world's great photographers. It explores his work principally through his images and the views of his subjects, many of them rock musicians like Bono from U2. As well as showing us a range of Corbijn's photographs and music videos, we see him at work on his first award-winning film, Control, about the late-1970s English band Joy Division and its lead singer, Ian Curtis. This film's title, Shadow Play, comes from a 1978 Joy Division song.

Background – who is Anton Corbijn?

Anton Corbijn was born in 1955 in Strijen, a small town in the Netherlands, and was the son of a Protestant minister. He began his career in Groningen, a northern city, first using his father's camera to take photos in 1972 at an open-air concert of the pop group Solution held in the town's central square.

In 1979, Corbijn moved to London to be closer to the music he liked (post-punk bands such as Joy Division, Magazine and Public Image Limited), working with the weekly musical magazine New Musical Express. He worked with NME until 1985. During this period he met many of the people from bands that he has since become famous for photographing – U2, Depeche Mode, Captain Beefheart, etc. His love of music and love of photography came together.

Corbijn is widely acknowledged and admired in the music industry as the creative director of the visual output of prominent bands like Depeche Mode and U2, having handled the principal promotion and sleeve photography for both for more than a decade.

He has taken pictures of many important figures of our time, from Miles Davis to Allen Ginsberg, from David Bowie to Martin Scorsese and Nelson Mandela. His images have infiltrated our lives via magazines, album covers, music videos, and graphic design. Several of them can justly be described as 'iconic'.

Corbijn's work bridges the often-separate worlds of commercial photography and fine art. He tends towards high-contrast monochrome, creating a distinctive world where everything is simply black or white. Yet the themes of his work are a million shades of grey and not so easy to pin down. He abhors the notion of celebrity and some of his work is a direct attack on our preconceived notions of the stars that inhabit our films, magazines and television screens.

He often shoots his subjects out of focus, in harsh shadow or in masks, obscuring their features. He places them in ridiculous and playful situations, staging choreographed scenes that subvert their carefully created images – and yet reveal more truth about them than anyone thought possible. This is the core irony of Corbijn's work – his ability to explode celebrity and replace it with new myths, new icons, imparting on his subjects the gravity and credibility they crave. He gives them an identity but not always one they might expect.

It's an approach that makes Corbijn the ideal candidate to handle the life story of one of rock music's most enigmatic characters – Ian Curtis, lead singer of late-70s English post-punk band Joy Division. Curtis was a mass of contradictions – a depressive epileptic prone to violent outbursts on stage, yet also a poet capable of creating true beauty. He loved life and dreamt of immortality, achieving it via a young and cruel death. With Control, Corbijn has directed a film that genuinely explores the paradoxes in Curtis' life without prettification or sentimentality.

Curriculum guidelinesShadow Play would be enjoyed by middle, senior-secondary and tertiary students of:

This is a visually exciting and informative journey into the creative