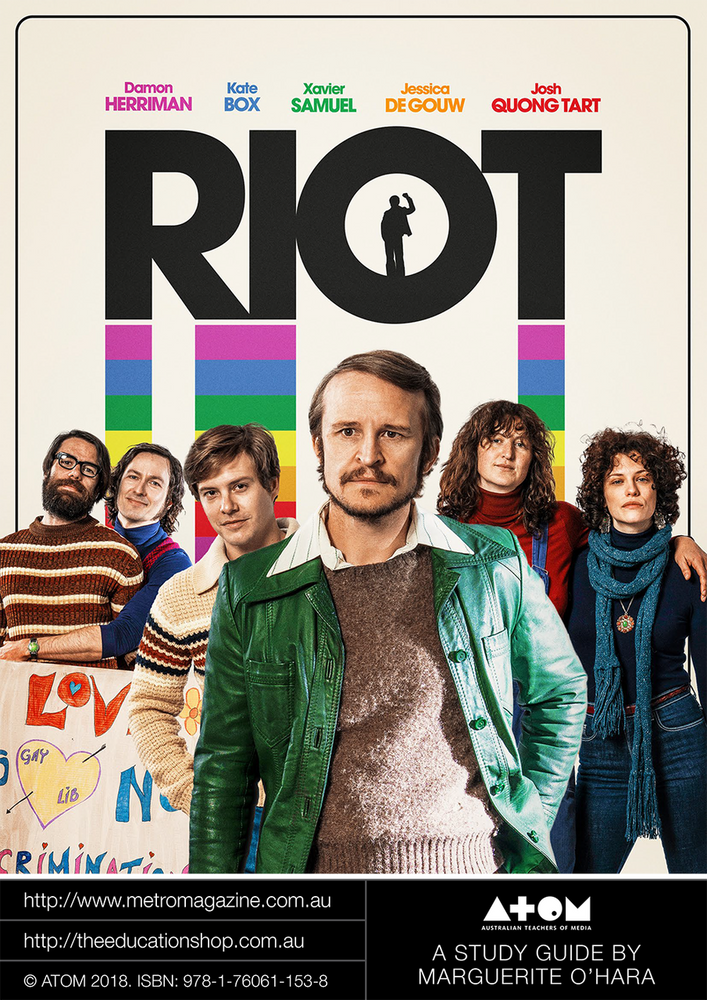 In the early 1970s, the Australian Gay and Lesbian Rights Movement is in its infancy, and women and men face police brutality, legislative persecution and social shunning.

Lance Gowland (Damon Herriman), a devoted and seasoned activist for various civil rights causes, came out in his early 30s and moved away from his wife and children in country NSW to Sydney. He lives at the Gay Liberation commune, providing guidance to the younger members of the community.

The Sydney activist community collects around groups like Gay Liberation, which focuses on in-your-face visibility tactics, and CAMP – the Campaign Against Moral Persecution — which focuses on law reform, educating the general public, and providing much needed community support.

Lance sees a need to straddle the sometimes conflicting aims and objectives of the groups, and lands noisily at CAMP, amongst activists Peter de Waal and partner Bon (Luke Mullins and Eden Falk), Ron Austin (Josh Quong Tart), Marg McMann and Robyn Plaister (Kate Box and Jessica De Gouw), and Sue Wills and Gabrielle Antolovich (Fern Sutherland and Hanna Mangan Lawrence). CAMP’s plans for social change involve engaging with the media and a telephone counselling service; passionate firebrand Lance wants rallies and protests — he sees the loud and belligerent tactics of his union past as the only way to bring change.

Marg and Lance clash as well as complement each other; they’re both natural born leaders, and begin to focus the group’s energies on more effective law reform. Marg is also a parent, and the risk of their sexuality leading to enforced estrangement from their children is a shared, constant threat.

Through the mid-1970s, the activists face battles and small victories. University students Peter Murphy (Christian Byers) and Jeremy Fisher (Will McDonald) bring new voices into the activist fray, and Lance meets Jim Walker (Xavier Samuel), a young, conservative doctor with whom he has little in common; nevertheless, they fall in love. Marg fights for custody of her children. They all face the continuing threat of job dismissal, violence, and inaction from politicians, but their resolve grows, and by 1978, when the push to decriminalize homosexuality has stalled, they decide to make one final attempt to celebrate who they are.

Securing a permit for a legal protest on the evening of June 24, in recognition of Gay Solidarity Day, a small but passionate group collect behind a truck driven by Lance to stage a street party and joyfully declare their pride. The crowd grows as chants draw people out of the bars and onto the streets, but the police begin to restrict their movement and the threatening tone grows when revellers head towards Kings Cross, as police paddy wagons circle. The night will be marked by great violence, but the ramifications will pave the way for equality, and the establishment of a world-renowned parade that continues to celebrate the spirit of these brave, pioneering men and women.

Many tertiary institutions offer Gender Studies courses in Australia - at least 12 of the major tertiary institutes. However, at the secondary school level, these specific studies are less common, more often being addressed through other study areas in the Australian Curriculum.

A notable exception is Fitzroy High School in Melbourne where students and teachers have developed a course called Fightback: Addressing Everyday Sexism in Australian Schools. These teaching units can be downloaded from the site listed below. They offer a very accessible approach to gender studies for secondary students.
http://fhsfemco.com/wp-content/uploads/2015/06/FHS_FIGHTBACK_v0615-2.pdf

Generally, schools tend to incorporate information about gender equality, which includes Gay Rights, Sexism and Feminism, in studies such as the VCAA courses under the general heading, Respectful Relationships Education. These studies focus on building and promoting gender equity in relationships and challenging gender stereotypes. Respectful Relationships education is partly about tackling family violence but it is also about embedding respectful relationships in school settings. Evidence shows that attitudes about gender roles and expectations and stereotypes are a key driver of family violence and through education, positive change can occur. Such studies also deal with the issues of bullying, stereotyping and the deliberate excluding of students perceived to be ‘different’ in some way from prevailing peer groups.

Another project developed at Melbourne University called Connect with Respect also deals with gender and identity issues in school settings.

Several states are currently drawing up their own Gender Diversity websites for use in schools. Programs like Riot provide a political/historical perspective embedded in true stories about real people who struggled and often suffered greatly to move this debate about gender and diversity into the mainstream. These individuals and groups’ often very public and painful struggle, to draw attention to gay rights in the 1970s, is an important and inspirational Australian story.

The Australian Curriculum key learning areas relating to this film include HPE- Heath and Physical Education, Civics and Citizenship, Australian History, Values and Ethics Education, Politics, Legal Studies and Media Studies (the documentary drama form) and English as an example of how to make contemporary history come alive.

The information and activities in this guide are directed at middle and senior secondary students and their teachers, within different strands of the above learning areas.

Riot clearly addresses a very important part of contemporary Australian history and life. With the recent change to marriage equality having been enacted in law by the Australian Government late in 2017, the issue of gay rights is clearly of concern to most Australians. Its history is less well known.

The Melbourne Declaration on Educational Goals for Young Australians (December 2008), which frames the Australian National Curriculum, states that students
will be

active and informed citizens and act with moral and ethical integrity, appreciate Australia’s social, cultural, linguistic and religious diversity, and have an understanding of Australia’s system of government, history and culture. As a nation, Australia values the central role of education in building a democratic, equitable and just society – a society that is prosperous, cohesive and culturally diverse ……

Teachers should watch this film before deciding to show it to students. The focus on sexual identity may raise a number of issues among students, so sensitive pre-viewing discussions may be necessary. The film also contains confronting images and strong language.