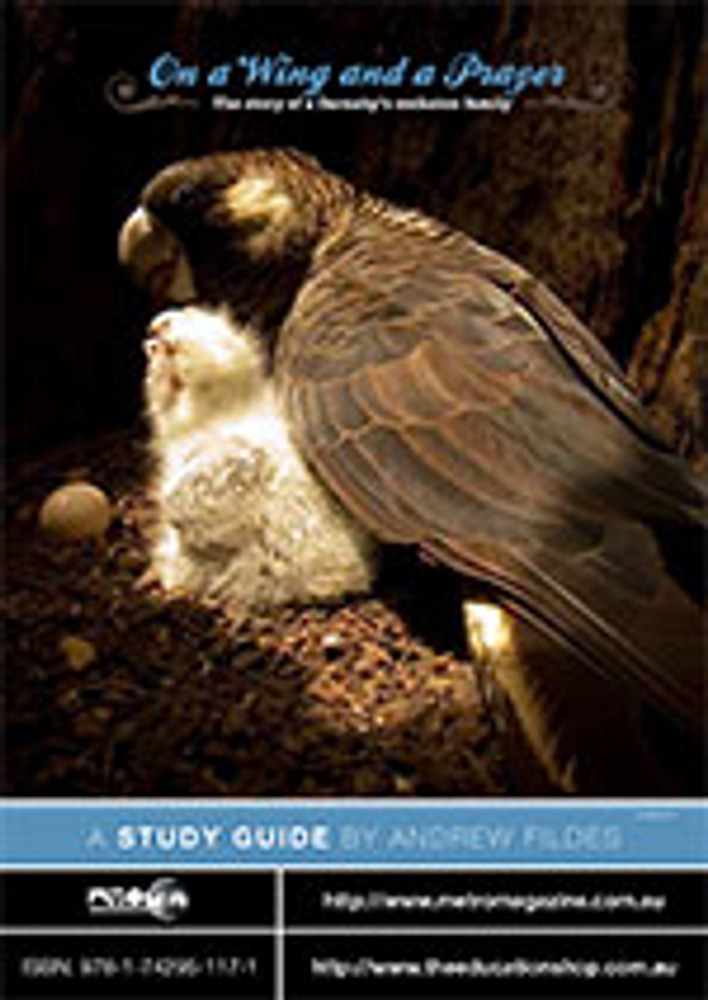 On a Wing and a Prayer (ATOM Study Guide)

The loss of any species is a tragedy, but when that species is as fascinating and engaging as a cockatoo, the pain seems worse. We have a special love of birds and still feel the pain of losing the Dodo! Some of Australia's five species of black cockatoo are in trouble, but Carnaby's cockatoo, endemic to the south-west of Western Australia is under particular pressure from human activities. This documentary examines the desperate situation of this remarkable animal.

Like any cockatoo, Carnaby's cockatoo has something uniquely Australian about it. Rowdy, raucous, intelligent and fun-loving, its haunting call has been part of the Western Australian landscape for the whole of human existence. Once, thousands of these birds darkened the sky as they foraged in their non-breeding areas. The timing of their movements from the non-breeding areas to the breeding areas in winter has led to them being regarded as harbingers of rain, or 'rain birds'.

Now they are sadly reduced to a fraction of their original numbers. Total numbers have halved in the last forty years. Because they are such a long-lived species, living for 25–50 years, it is thought that many of them could now be elderly with few young birds in the population. At present, there may be few young Carnaby's cockatoo being recruited to the breeding population.

Consequently it is important to examine, assess and learn more about this signature species. The threats to wild Carnaby's cockatoo are many. Some are still illegally shot by orchardists, trying to protect their crops. Others meet their fate on the roads or are poached by thieves supplying the aviary trade; black cockatoos are keenly sought by overseas bird keepers. But the biggest challenge they face is the result of the loss and fragmentation of their habitat. Their breeding range is the highly productive Wheatbelt and much of their feeding shrub lands and breeding trees have been cleared to grow crops. Areas outside their breeding areas have also been cleared for development, reducing native food resources so the birds have to depend on the seeds of introduced plants in their non-breeding areas.

This documentary focuses on one family of Carnaby's cockatoo, a life-bonded pair whose ability to breed successfully is important for the species. Each season, an experienced pair usually lays two eggs and most commonly raises one nestling, although they can occasionally raise two. The birds are assisted by many people, including scientists, farmers, members of Landcare groups, non-government conservation organisations and government agencies. Rick Dawson, a senior wildlife officer of the Department of Environment and Conservation, is such a person. Rick has been monitoring nesting progress, protecting nests from poachers, investigating and prosecuting people who illegally kill protected fauna, and banding, micro-chipping and sampling DNA of nestling birds and assessing the health of Carnaby's cockatoo populations.

Through this documentary, we get a fascinating glimpse of the life of this remarkable species and some of the people entrusted with its protection. Carnaby's cockatoo is an ideal species for classroom study as it has huge student appeal, specific dietary and breeding requirements and is listed as endangered by the Western Australian Government, the Federal Government and internationally.