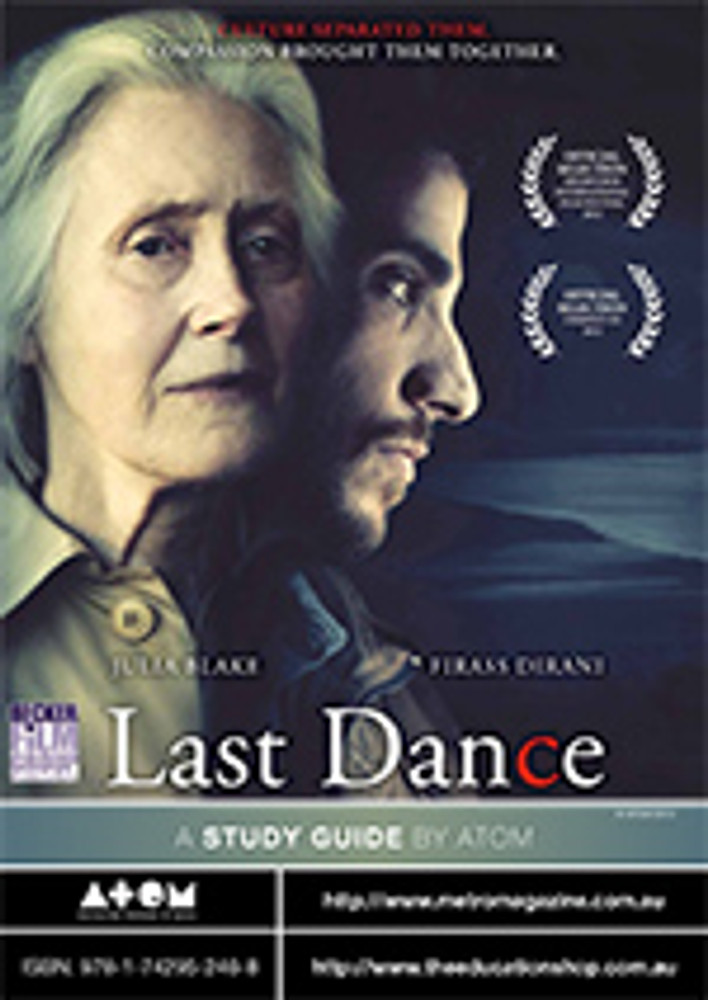 Last Dance (David Pulbrook, 2012) is an 88-minute feature film set in Melbourne but to the background of a modern conflict between Israel and the Palestinians.

When live-alone Holocaust survivor Ulah Lippmann visits her local shopping precinct, she suddenly finds herself caught up in the panic that follows a terrorist attack in the neighbourhood. She hurries back to her apartment only to be taken captive by a Palestinian radical, who is on the run after bombing the nearby synagogue. Wounded and losing blood, Sadiq Mohammed sees Ulah's apartment as a place to hide while he plans his next move. Ulah has other ideas. Despite the fact that Sadiq has tied her up, a psychological battle unfolds. In order to prevent more violence, Ulah must keep her ever-inquisitive neighbour, the widowed Mr. Nathan, at bay, as well as her daughter on the other end of the phone. When Sadiq collapses from his wounds, Ulah has a chance to escape.

However, events take an unexpected turn. Ulah sees something of her long dead son, Ari, in Sadiq. Captive becomes captor as Ulah takes control, not calling the police but caring for Sadiq, cleaning his wound, nursing him through the night – only to discover his dreadful secret: Sadiq is still wearing the suicide bomb vest. His companion was the one who caused death and destruction at the synagogue, not him. Even as she enters the police station, UIah cannot bring herself to turn Sadiq in. She returns to the apartment driven by unfinished business and by something buried deep within her.

As Sadiq recovers consciousness, he and Ulah are drawn closer together – at times driven by mutual need, by revelations about both their pasts, and by events outside the room. Mr. Nathan returns with two police officers who search the apartment; but Ulah has hidden Sadiq and the police leave without finding the fugitive they're looking for.

With the police closing in and Sadiq's controller hunting him down, Ulah decides to help him escape. What happens in the final minutes – as Ulah and Sadiq take their leave of each other – will stay in the mind long after the end credits roll.

Taut and confronting, Last Dance is a drama torn from today's headlines, yet as universal as the human condition. It touches on issues of ideology, faith, freedom and oppression. It is also about the power of compassion and is, ultimately, the story of family and a mother's love.

Last Dance can be used as a way of introducing the issues of the Israel–Palestinian conflict, terrorism, Islamic fundamentalism and Holocaust survival in senior classes (Years 10–12) in: