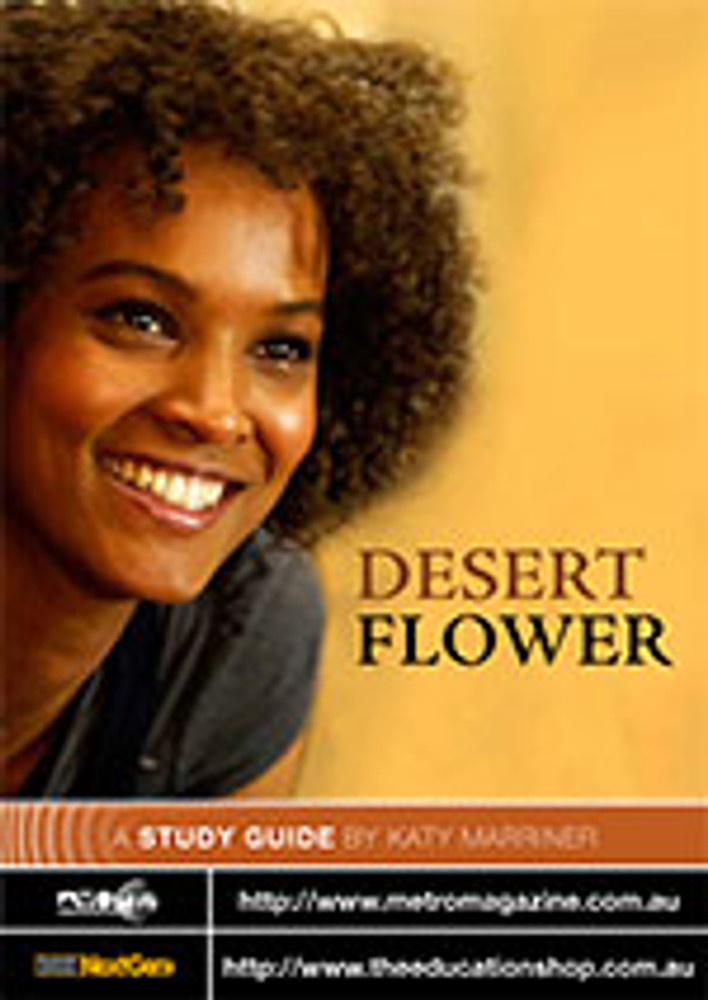 At age thirteen, Waris Dirie decides to leave her family to flee an arranged marriage to a man old enough to be her grandfather. In the middle of the night, she bids farewell to her younger brother, whom she dearly loves, and steals away from the desert camp of her nomadic family. She makes her way through the Somali desert in the hope that she will find her way to the capital, Mogadishu, where her mother's family lives. Completely exhausted, with ragged clothes and sores on her feet, Waris manages to overcome all the dangers of the desert and finally finds her aunt and grandmother in the chaotic bustle of the Somali capital.

Sympathetic to her dilemma, Waris' relatives send her to London to work as a servant at the Somali embassy. This is where she spends the rest of her adolescent years, cut off from the outside world, as if in a jail. When civil war breaks out in Somalia and the Somali embassy is closed down Waris, now a young woman, finds herself faced with the threat of deportation and so decides to escape again. Homeless and alone, Waris wanders the city streets, unaware that she is now regarded as a political refugee.

A chance encounter in Topshop leads to shop assistant and aspiring ballet dancer Marilyn taking Waris home. They share a room in the boarding house of feisty Pushpa. Marilyn helps Waris find work and the two become firm friends. It is after a night out clubbing that a confused Waris decides to trust Marilyn with her secret. Waris was circumcised when she was a child and then sewn up. This is a common and cruel tradition, which according to Somali beliefs is meant to guarantee a woman's purity. With Marilyn's help, Waris decides to have an operation that will put an end to her pain and suffering.

Having made the brave decision to put her health before an archaic cultural practice that has caused her great physical and emotional pain, Waris finds the confidence to begin her life anew. Famous fashion photographer Terence Donaldson, a regular customer at the burger bar where Waris works, has given her his business card. She visits his studio and agrees to be photographed. Donaldson introduces her to ambitious agent Lucinda, who is willing to guide Waris' transformation into a working model and set her on the path to international fame.

With the help of Pushpa, Waris secures a false passport and is set to travel the world. The plan fails. Waris is arrested at the airport on the way to Paris and taken into custody pending deportation. Lucinda pays the bail and Waris, desperate not to return to Africa, accepts the marriage proposal of the boarding-house caretaker Neil. They marry, but Waris soon realizes that Neil's motives are not as altruistic as he has claimed. Waris cannot love Neil because she is dreaming of another man, New Yorker Harold Jackson, whom she met in a London club.

When Waris is granted a permanent residency permit, she leaves Neil and resumes her career as an international model. It is while she is working in New York that Waris finds the courage to visit Harold at home. Mistaking his roommate for his girlfriend, Waris becomes embarrassed and leaves without telling Harold how she feels. She wanders aimlessly through the streets of New York, reproaching herself for her silly ideas.

During an interview with Marie Claire magazine Waris refuses to repeat her 'Cinderella' story, and instead chooses to tell the story of the day that changed her life forever: the day of her circumcision in the Somali desert at the tender age of three.

Waris is invited by the UN in New York to speak against and call for the banning of female genital mutilation. Waris is not alone. Marilyn is with her and at the last moment, Harold arrives. Waris Dirie's life is about to change – forever.

Desert Flower is based on the autobiographical novel by Waris Dirie, a model, actress, author and United Nations (UN) spokeswoman against female circumcision.