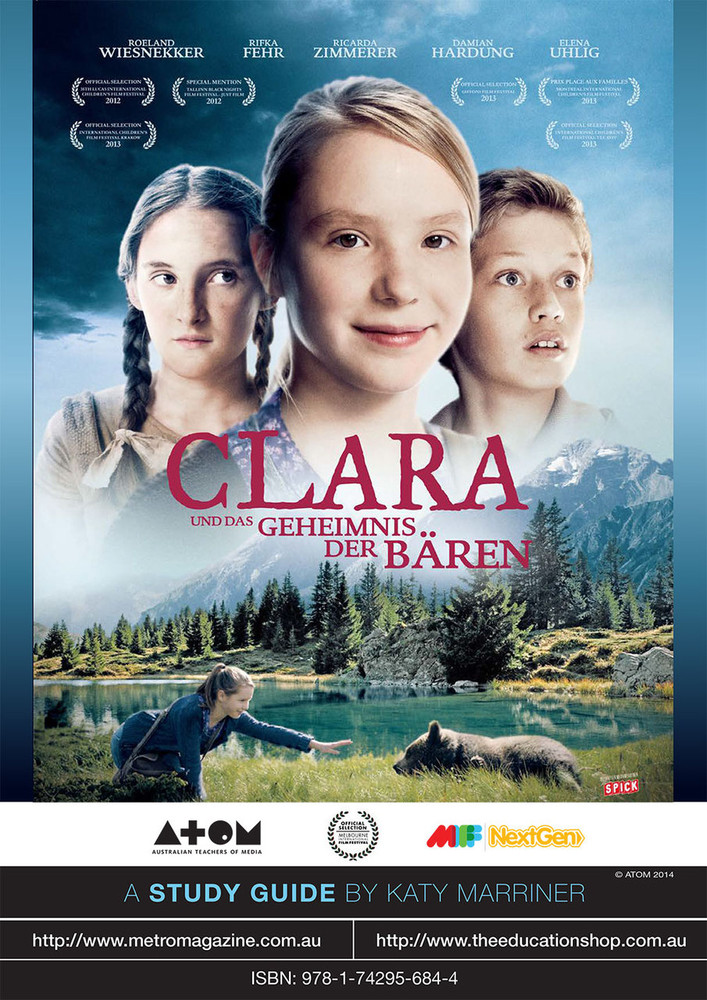 Clara and the Secret of the Bears (ATOM Study Guide)

Clara and the Secret of the Bears (2012) is a German–Swiss feature film directed by Tobias Ineichen. The balance of nature is in danger, and only thirteen-year-old Clara has the heart to solve the secret of the bears and break a 200-year-old curse.

Clara and the Secret of the Bears is adapted from a novel by Marian van der Heiden.

Thirteen-year-old Clara (Ricarda Zimmerer) lives with her mother Nina (Elena Uhlig) and stepfather Jon (Roeland Wiesnekker) on a farm in the Swiss Alps. Having returned from a holiday in the city, Clara heads into the forest that surrounds the farm. She sees a bear cub and is certain that the cub belongs to Zelda, a she-bear that was shot by poachers.

Nina listens to her daughter's story of the bear cub and the she-bear but is skeptical. Jon is adamant that there are no bears. When their livestock is hurt, beehives plundered and roadside kiosk damaged, Nina and Jon accept that Clara is telling the truth.

Clara's discovery of an old boot leads to contact with Susanna (Rifka Fehr), a girl who lived on the same farm 200 years ago. Clara's world is turned upside-down by her newfound ability to see through time. Susanna cannot rest. When her father captured a bear cub, a curse was placed on the house. Susanna needs Clara to help her break the curse and put nature right. Susanna must release the bear in order to save her unborn sibling.

Thomas (Damian Hardung), a new boy at school, is keen to help Clara. Thomas usually lives in a children's home in the city. He has been sent to live with a foster family in the mountain village as a disciplinary measure. Clara confides in Thomas, and Thomas, unlike others, does not question Clara's commitment to solving the mystery of both Susanna and the bears that she has seen in the forest.

Clara's odd behaviour worries her mother and angers Jon, who is vehemently opposed to any kind of superstition. Jon's grandmother understands that Clara can sense things that others are incapable of perceiving. In the bric-a-brac shop belonging to Jon's grandmother (Monica Gubser), Clara finds an old book that describes the legend of the bearwoman. Now she knows why Susanna wants to set the bear cub free.

When Clara accidentally causes a fire in the kitchen, she confesses to Nina and Jon that she must help Susanna to lift the curse. Jon finally admits that he has heard about the curse and about Susanna. His grandmother was always talking about it but no-one really believed her. And this is also the reason why, for years now, Jon has not spoken to her.

Nina becomes so worried about Clara that she wants her to leave the mountain farm and return to the city. But Clara cannot leave now. She has to help Susanna and also, in the real world, protect the bears from the poachers.

Clara and Thomas find the bears in the mountains, but the poachers arrive with guns. Clara puts herself in the line of fire and connects with Susanna for the last time. Together the girls succeed in doing what one alone could not do – to finally free the bear cub from the shed and lift the curse.

Things are also set right in Clara's world. A helicopter appears on the mountain plateau. Jon and the ranger are inside. The bears are saved and the poachers punished. The balance between humans and nature is restored – both now and 200 years ago.

Clara and the Secret of the Bears is suitable for primary school students in Years 5–6 and secondary students in Years 7–8 undertaking subjects within the learning areas of English, Languages (German) and The Arts (Media Arts). The film is relevant to the teaching of the General Capabilities of Intercultural Understanding, and Personal and Social Capability, and the Cross-Curriculum Priority of Sustainability.