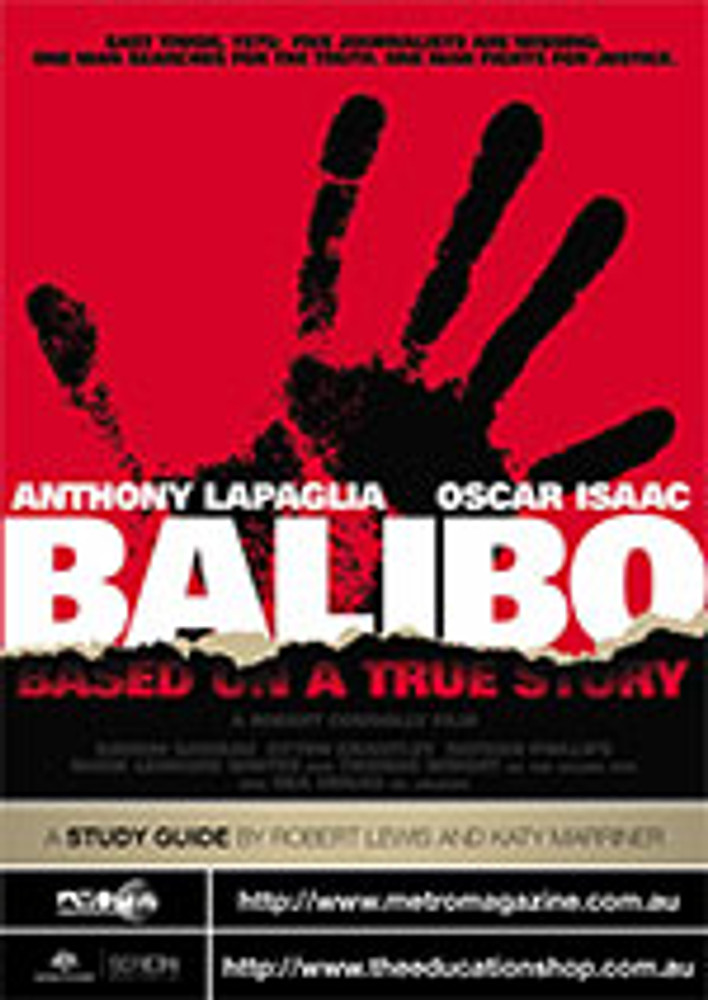 Balibo (Robert Connolly, 2009) is a powerful fictionalised version of the true story of the murder of five Australian-based journalists in Balibo, East Timor, in 1975 during the invasion by Indonesia, and the death of a sixth journalist, Roger East, who discovered the truth about the killings. Balibo is 111 minutes and is rated M.

The story is introduced through the experience of the character Juliana Da Costa. She is at the modern-day Timor-Leste capital, Dili, to give evidence to the Commission For Truth and Reconciliation. Her testimony takes us back to 1975, when she was nine years old and a witness to the Indonesian invasion of what was then East Timor. The revelations of her testimony frame Balibo as Juliana describes the day of the invasion, the massacre that unfolded on the Dili Wharf, and the story of journalist Roger East, whose death she witnesses.

In October 1975, the former Portuguese colony of East Timor is in a position of political instability after its abandonment by the Portuguese Government. The pro-independence Fretilin and pro-Indonesian integration UDT are struggling for power. Indonesia decides to impose its control on the newly-declared nation.

The five journalists were killed while reporting the Indonesian invasion to seize control. They were reported to be killed when caught in the cross-fire of the battle to take the town of Balibo, near the Indonesian-East Timor border. Four weeks later, veteran foreign correspondent Roger East is approached by 25-year-old José Ramos-Horta who attempts to lure him to East Timor to run the East Timor News Agency. Roger East agrees to join Horta in East Timor, but only if he is first given complete access to the nation to find out the fate of the 'Balibo Five' journalists – Channel Seven's Greg Shackleton, Gary Cunningham and Tony Stewart, and Channel Nine's Brian Peters and Malcolm Rennie. All five had last been seen filming news reports in the small town of Balibo.

East does not accept the official story that the men were killed in crossfire. As his determination to uncover the truth intensifies, he and Horta undertake the perilous journey through the rough country from Dili to Balibo, terrain now occupied by day by Indonesian forces.

Inter-cut with their journey is the story of how the journalists, four weeks earlier, made their way to Balibo determined to film the imminent Indonesian invasion. Most forceful of the group is Greg Shackleton who is keen to fulfill his duties as a journalist in a wartime situation and, from a compassionate perspective, to tell the East Timorese point of view.

On the morning of 16 October all five men are brutally executed in cold blood by the invading Indonesian troops, after clearly identifying themselves as Australian journalists. Their bodies are then burnt.

Without any official Australian Government protest, the Indonesian army continues to secure the border area and advance on Dili.

After uncovering the awful truth, East returns to Dili with a renewed determination to tell the story of the country he has come to care about. On his return, he is told that Horta has been chosen by his colleagues in the East Timorese Government to leave East Timor and represent the country in exile at the United Nations. Horta is unable to convince Roger East to join him on a flight to safety in advance of the impending invasion, leaving East as the only remaining foreign correspondent in East Timor. With US President Ford and Foreign Secretary Henry Kissinger safely in the air after approving the invasion in secret meetings in Jakarta, and with an assurance of Australian non-intervention by Australian Prime Minister Gough Whitlam, Indonesian paratroopers and commandos attack Dili and immediately capture East who is reporting the invasion.