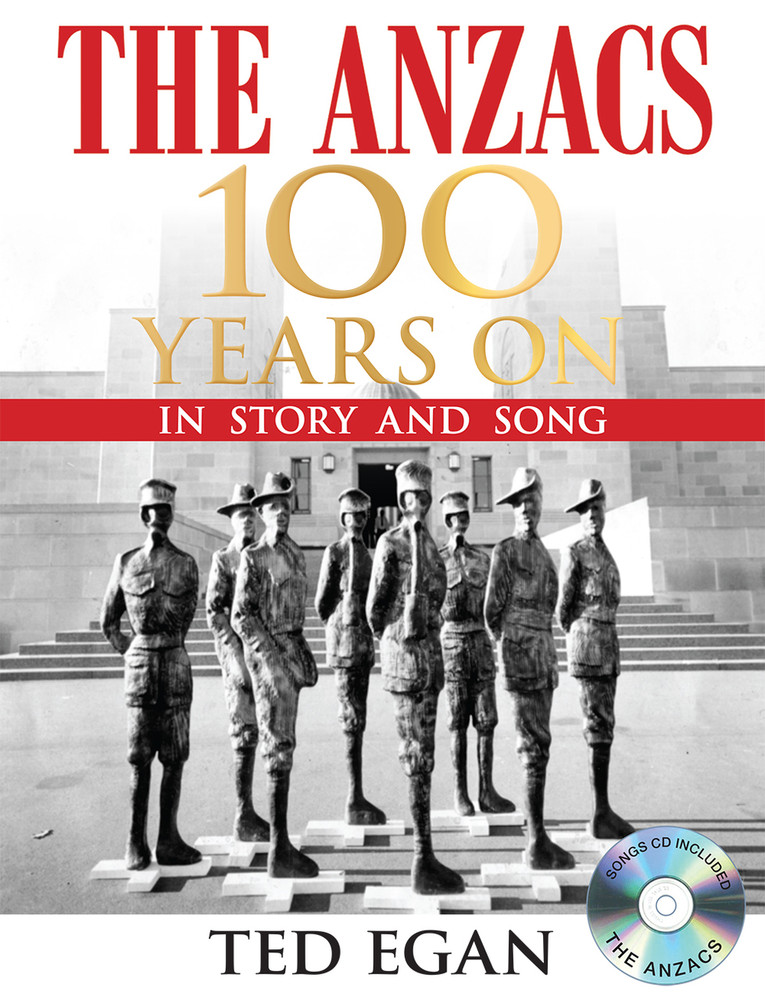 The Anzacs: 100 Years On in Story and Song combines never-before-seen diaries, private letters, rare photographs and deeply moving songs, along with the sheet music and lyrics. Ted Egan engages our hearts as well as our minds to present a touchingly personal historical account of World War One and its aftermath.

It tells a story of the loss of innocence of two young nations. Amusing anecdotes and stories of great bravery and ingenuity leaven, to some extent, the brutal truth of the war. We see how the war touched the lives of all those involved, be they in Gallipoli, the Western Front, the Middle East or at home in Australia and New Zealand. We share, too, in the emotions of those closest to the soldiers and nurses who served at the front, mourning the loss of those who died needlessly and weeping for the maimed and insane at the end of ‘the war to end all wars’.

The book comes with a CD of 20 songs and commentary by original Anzac Jack Nicholson. The songs are a unique, poignant expression of the World War One experience and take us on a moving personal journey into the heart of the Anzac legend.

The Anzacs: 100 Years On in Story and Song serves as a tribute to the heroism of ordinary people in a deplorable situation. It deepens our understanding of the war that so profoundly shaped the national psyches of these two emerging nations, New Zealand and Australia, and forged enduring historical and cultural connections between their citizens.

The Anzacs: 100 Years On in Story and Song is unique in its contribution to the literature and music on the Anzacs.

Testimonials
Ted Egan has been writing and singing about the Anzacs for over forty years. He sang some of the songs here while the old Anzacs listened, and passed that strict test brilliantly. He writes now for their descendents, young and old, an even stricter test, and passes that easily. There is nothing like this splendid collection. It pays an original and memorable tribute to an extraordinary generation. – Professor Bill Gammage AM, historian, adjunct professor at the Australian National University (ANU), author of The Broken Years: Australian Soldiers in the Great War and the award-winning book The Biggest Estate on Earth: How Aborigines Made Australia

Ted Egan’s superb commemorative book uniquely blends the Anzac story with 20 songs. The achievements of Anzac troops should be proudly acknowledged, but it is important to remember that in reality war is an ugly, brutal affair in which promising young lives are snuffed out in an instant. – Tim Bowden AM, writer, broadcaster and historian

About the author
Ted Egan AO is a national living treasure. He was born in Melbourne in 1932 and moved to the Northern Territory when he was sixteen. He worked with the Department of Aboriginal Affairs, was a prominent sportsman, founded the St Mary’s Australian Rules football team of young Tiwi Islanders and developed a career as an entertainer, writer, historian and television presenter. He has produced thirty albums and twelve books. In 2000, Egan was named Territorian of the Year, and from 2003–2007 he was Administrator of the Northern Territory. Ted Egan lives with his wife, Nerys, in Alice Springs, and is currently completing a PhD on the first Administrator of the Northern Territory.