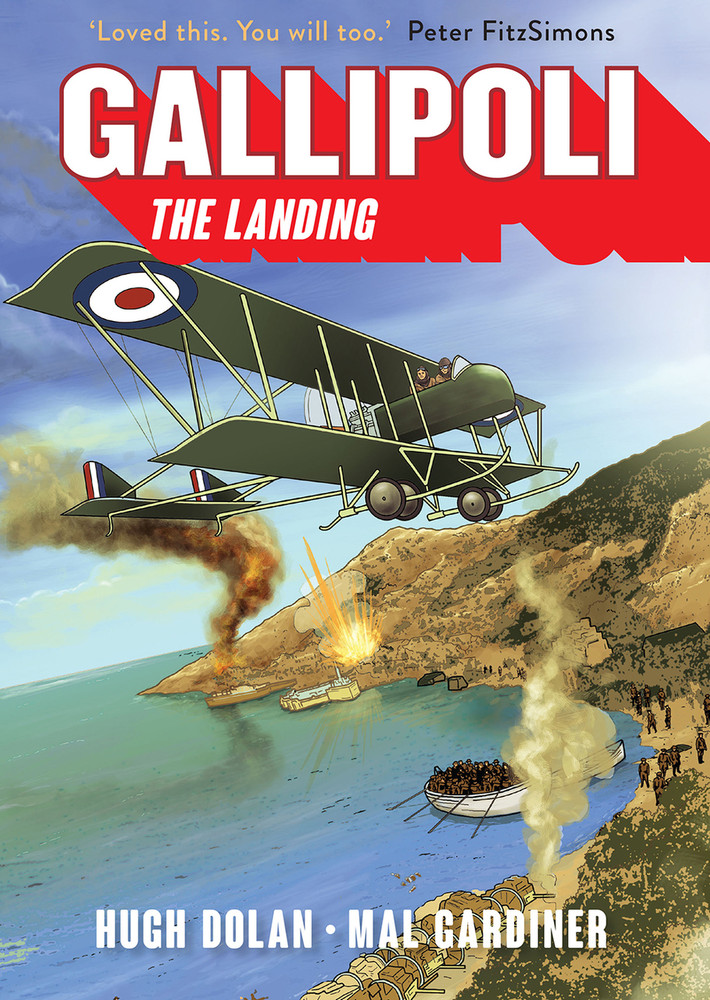 The Gallipoli legend that we know is not our own. Somehow, we have stolen the British experience of a dawn slaughter on a beach further south, under Turkish guns. The Australian landing on Z Beach, our allotted coast, was tactically brilliant. ANZAC officers planned their own amphibious assault without the interference of British officers, who were content to row ashore in daylight against a prepared enemy.

Z Beach True Comics presents the facts. Issue No. 1 Gallipoli: The Landing is a non-fiction account of how ANZAC officers used all available intelligence to plan a surprise night assault using stealth. This graphic narrative follows the roles of espionage, spying, and the use of aerial reconnaissance, which provided ANZAC officers with the military intelligence to plan an effective assault despite a heavily defended coast.

Few know that ANZAC Headquarters tasked the world's first aircraft carrier, HMS Ark Royal, to assist in the landing. Gallipoli: The Landing follows the story of how seaplanes, and later wheeled aircraft based on the island of Tenedos flew across Gallipoli locating enemy defences. The story describes how Major General William Bridges, commander of 1 Australian Division, included these intelligence reports to craft a silent night assault in order to get his men onto Z Beach alive. Old rumours, such as the wrong beach, are killed.

Gallipoli: The Landing takes the reader on a factual journey through the recruitment, training and despatch of ANZAC to a hotly contested shore on the Gallipoli peninsula. Cleverly, original source documents: army orders, battalion diaries, soldiers' letters and personal diaries are woven into this gripping pictorial narrative. The story follows the groundbreaking non-fiction book by Squadron Leader Hugh Dolan, 36 Days: the untold story behind the Gallipoli landings (Pan Macmillan, 2010) into a form accessible to a younger audience.

The author Hugh Dolan and artist, Mal Gardiner, were former members of the Australian Defence Force. Mal Gardiner has used original photographs from 1915 to render accurate pictures and technical drawing. His use of perspective, in many individual frames, is astonishing. Mal served for over twenty years in Australian submarines. Hugh is a retired intelligence officer and uses this perspective to show how Australian ingenuity put ANZACs ashore in the dead of night with few casualties. This is a story everyone must read.

Gallipoli: The Landing's 100+ pages are packed full of action and are footnoted for Australian history teachers following the National Curriculum.

This comic is also available in a black and white edition.