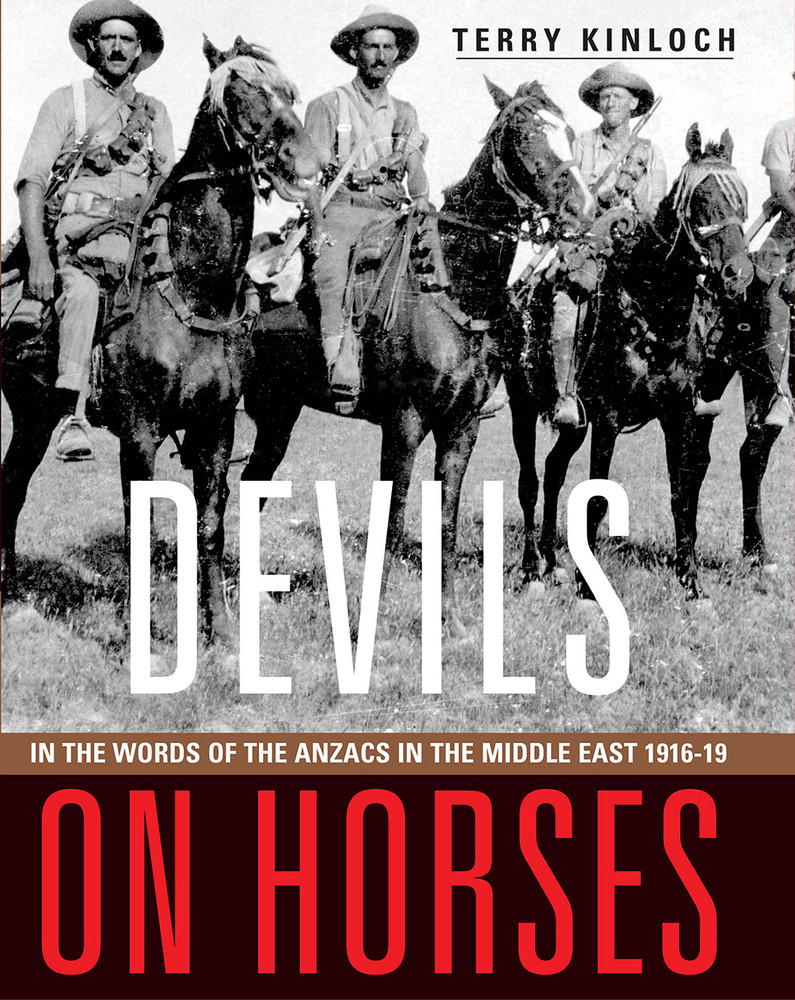 Devils on Horses: In the words of the ANZACs in the Middle East 1916-19

’Devils on Horses is a very important book for New Zealanders, and for those who read military history. We now have an account of the New Zealand Mounted Rifles Brigade in Sinai and Palestine that at last does justice to their story. This was perhaps the finest body of New Zealanders ever to serve overseas, and now we can see why.’ – from the foreword by Dr Christopher Pugsley

Reunited with their horses in Egypt after the shattering experience of Gallipoli, the Anzac mounted riflemen and light horsemen were initially charged with the defence of the Suez Canal, then with the clearance of the Sinai peninsula, and finally with the destruction of the Turkish armies in Palestine and Syria. At last they could pursue the style of warfare for which they had been trained: on horseback.

World War One battlefields in the Middle East have long been overshadowed by those of Gallipoli and the Western Front. Yet the story of the mounted riflemen in Sinai and Palestine is a truly fascinating one. Using the soldiers’ original letters and diaries wherever possible, Kinloch vividly describes every battle and skirmish in the long campaign against the Turks: the crucial Battle of Romani, the defeats at Bir el Abd, Gaza and Amman, and the successes at Beersheba, Ayun Kara and elsewhere. He explains the reality of tactical operations in the harsh desert environment, the ever-present necessity of securing water for the precious horses and the remorseless tenacity of the enemy.

The horses play a major part in the story, but of the thousands of faithful animals involved, only one would ever return home after the war.

Devils on Horses is a gripping read that offers new information about a theatre of war that has been overlooked for decades.

Based on original research and drawing from letters, diaries, published memoirs and interview records of nearly sixty New Zealanders, it is sure to be the standard reference work on New Zealand’s Middle East campaign for years to come.

About the author:
Lieutenant-Colonel Terry Kinloch has held a commission in the New Zealand Army since 1983. He has completed operational tours in Bougainville, Bosnia-Herzegovina and Egypt. He spent much of his regimental career in Queen Alexandra’s Mounted Rifles, an armoured unit that is the last Regular Force link to New Zealand’s horse-mounted units. This is his second book about the New Zealand Mounted Rifles Brigade in World War One, completing the story begun in the author’s acclaimed first book Echoes of Gallipoli. Lieutenant-Colonel Kinloch was made a Member of the New Zealand Order of Merit (MNZM) in 2006. He has served a posting in Washington DC as New Zealand’s staff officer in the American, British, Canadian, Australian and New Zealand Armies Program. He lives in Wellington, New Zealand.