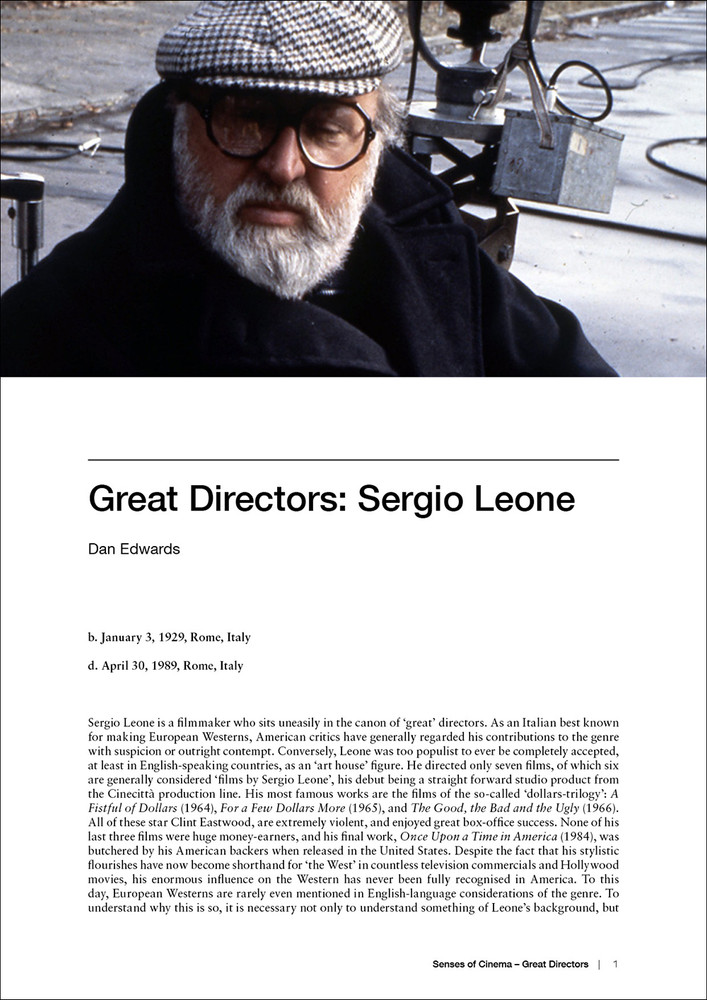 Sergio Leone is a filmmaker who sits uneasily in the canon of 'great' directors. As an Italian best known for making European Westerns, American critics have generally regarded his contributions to the genre with suspicion or outright contempt. Conversely, Leone was too populist to ever be completely accepted, at least in English-speaking countries, as an 'art house' figure. He directed only seven films, of which six are generally considered 'films by Sergio Leone', his debut being a straight forward studio product from the Cinecittà production line. His most famous works are the films of the so-called 'dollars-trilogy': A Fistful of Dollars (1964), For a Few Dollars More (1965), and The Good, the Bad and the Ugly (1966). All of these star Clint Eastwood, are extremely violent, and enjoyed great box-office success. None of his last three films were huge money-earners, and his final work, Once Upon a Time in America (1984), was butchered by his American backers when released in the United States. Despite the fact that his stylistic flourishes have now become shorthand for 'the West' in countless television commercials and Hollywood movies, his enormous influence on the Western has never been fully recognised in America. To this day, European Westerns are rarely even mentioned in English-language considerations of the genre. To understand why this is so, it is necessary not only to understand something of Leone's background, but the particular manner in which this background coloured his inflection of American genre conventions.

Euphoria and Liberating Laughter: The Cinema of Sergio Leone