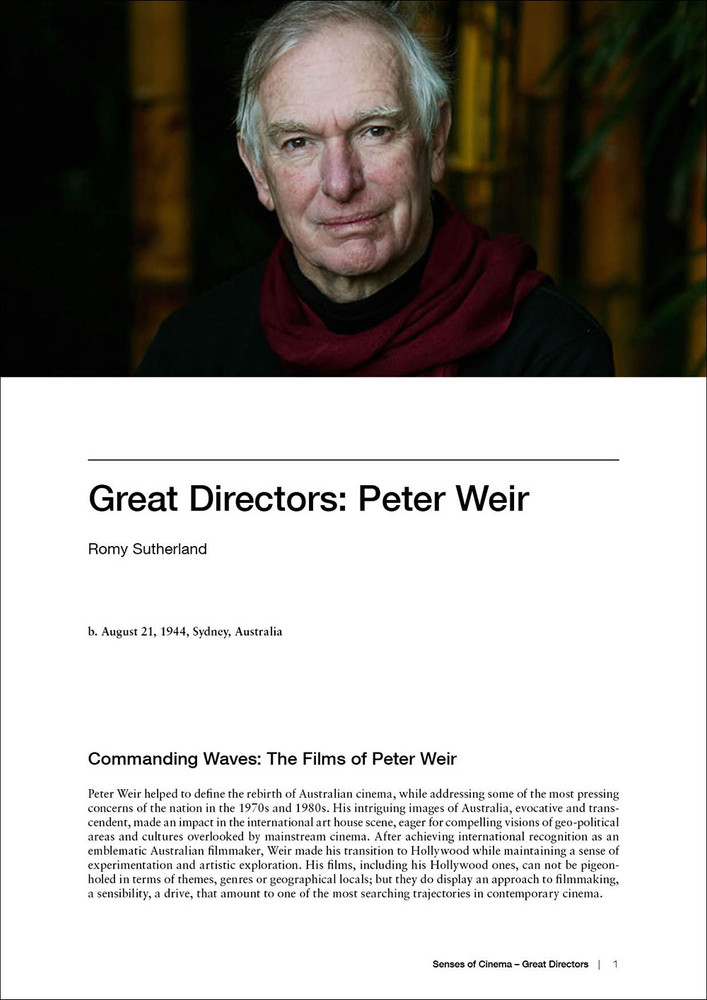 Weir's work has received a considerable amount of journalistic and critical attention, including four scholarly books, each of which offers a sense of the Australian director as an auteur with identifiable characteristics. Don Shiach shows that Weir's films repeatedly offer intimations of alternative realities; Mark Haltof argues that the tense encounter between distinct cultures is Weir's dominant concern; Jonathan Rayner underscores Weir's consistent amalgamation of European art-house characteristics with genre conventions; and Michael Bliss highlights Weir's ability to evoke hallucinatory, dreamlike states. These illuminating views complement each other: Weir's cinematic exploration is often realised in films in which generic conventions border on the iconoclastic, alternative realities and cultural incompatibilities abound, and numinous yearnings challenge staid conventionalities. One could add that Weir's films are invariably concerned with the struggle for authenticity, and that his most memorable characters – often confronted with danger, uncertainty, or betrayal – become uneasy with the world as they have found it, or as it has found them. They are often exposed to unsettling aspects of their own realities – sometimes traumatic ones – that lead to their loss of innocence or naiveté. Weir's camera draws their worlds of grief, confusion, or spiritual awakenings with adroit cinematic techniques that convey subjective states: oneiric compositions sometimes bordering on the surreal, distorted sounds, slow motion, and un-naturalistic light exposure. Weir is more of an observer, a dreamer, even a debunker, than a mythmaker, and his sensibility – sometimes bordering on, but never fully reaching, a comic pitch – is ironic rather than tragic. A glance at the careers of actors who have worked with him suggests that Weir has been a catalyst of their growth. He elicits natural performances from children and first-time actors, while extending the range of established talent from Mel Gibson to Robin Williams and Jim Carrey.