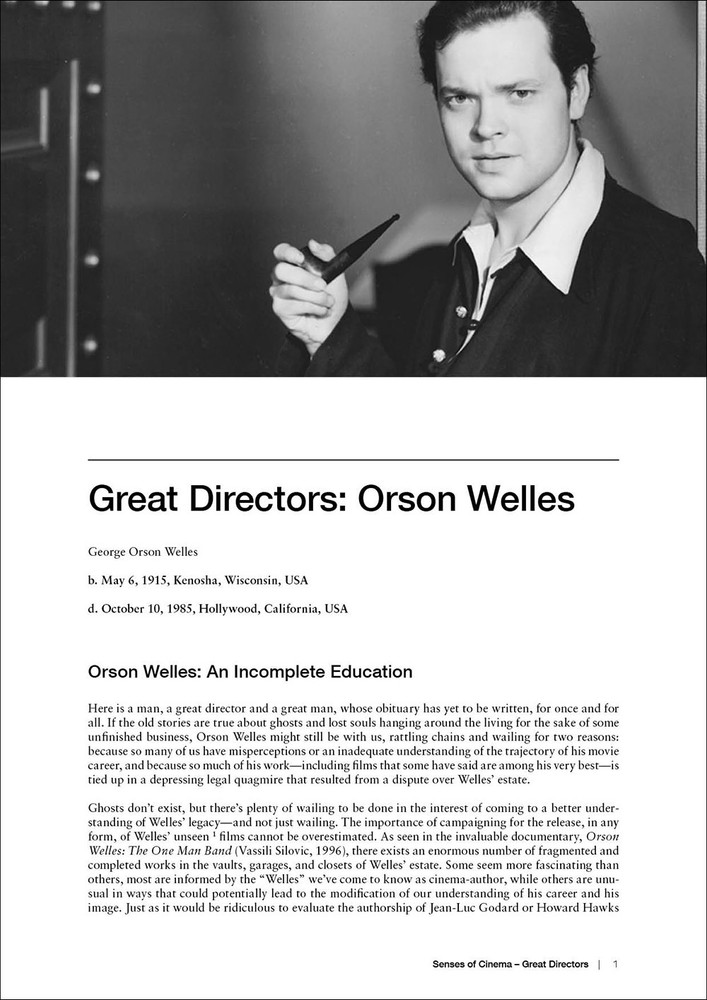 Here is a man, a great director and a great man, whose obituary has yet to be written, for once and for all. If the old stories are true about ghosts and lost souls hanging around the living for the sake of some unfinished business, Orson Welles might still be with us, rattling chains and wailing for two reasons: because so many of us have misperceptions or an inadequate understanding of the trajectory of his movie career, and because so much of his work – including films that some have said are among his very best – is tied up in a depressing legal quagmire that resulted from a dispute over Welles' estate.

Ghosts don't exist, but there's plenty of wailing to be done in the interest of coming to a better understanding of Welles' legacy – and not just wailing. The importance of campaigning for the release, in any form, of Welles' unseen films cannot be overestimated. As seen in the invaluable documentary, Orson Welles: The One Man Band (Vassili Silovic, 1996), there exists an enormous number of fragmented and completed works in the vaults, garages, and closets of Welles' estate. Some seem more fascinating than others, most are informed by the 'Welles' we've come to know as cinema-author, while others are unusual in ways that could potentially lead to the modification of our understanding of his career and his image. Just as it would be ridiculous to evaluate the authorship of Jean-Luc Godard or Howard Hawks by focusing strictly on the films that are relevant only to our so-called 'official' cultural indicators, like box office receipts, Academy Awards, and festival attendances, so too is it only sensible to realize that informed judgments cannot be made on the shapes, textures, and meanings of Welles' career, if all we have is a very limited pool of evidence.