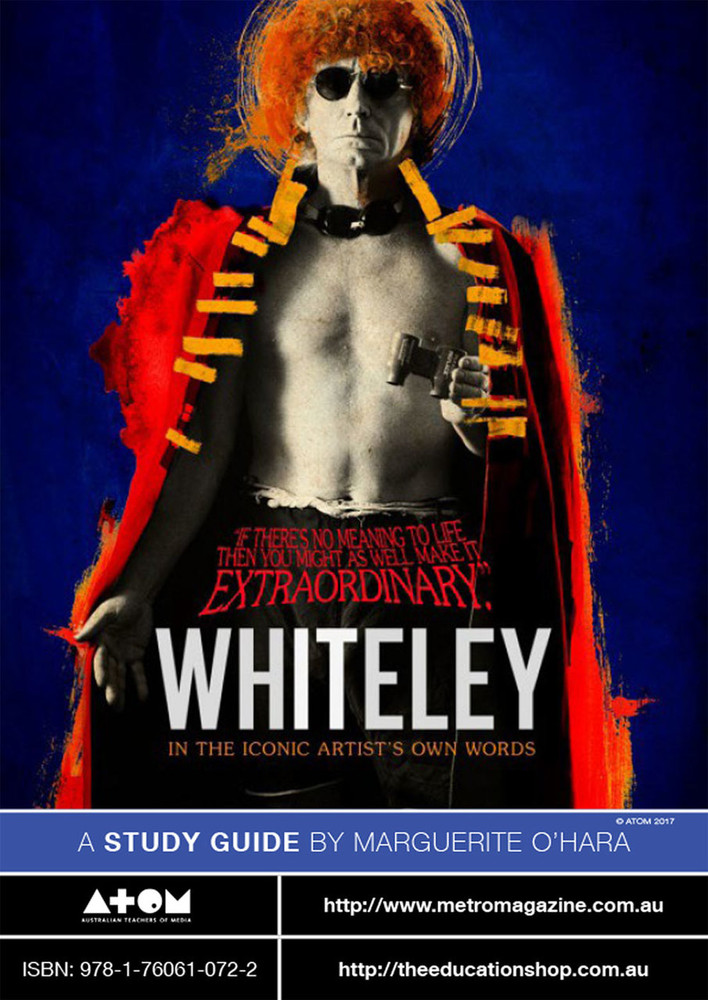 Whiteley: In the Iconic Artist's Own Words (ATOM Study Guide)

WHITELEY is a visual journey into the private life and creative legacy of Australia’s most iconic artist, Brett Whiteley, told “in his own words” using personal letters, notebooks and photographs, interwoven with reconstructions, animations, archival interviews and rare footage. The documentary is directed by James Bogle and produced by Sue Clothier.

25 years after his untimely death, there has never been anyone like Brett Whiteley in the history of Australian art. A talented self-taught illustrator and painter, he was catapulted out of Sydney at 20 when he won a travelling art scholarship to Italy. So began a stellar career which saw him budding in Europe, flourishing in London, and almost disintegrating in New York.

Returning to Australia in 1969, Whiteley helped to define the young nation’s unique creative voice, as it emerged from colonial conservatism and independently entered an ambitious, cosmopolitan era. Whiteley combined the influence of Lloyd Rees (his own Australian role model) with eclectic inspirations gathered overseas, forming an illuminating personal style that propelled him into the global limelight.

Whiteley’s constant muse was his wife, Wendy. Both a catalyst for his creative passions and a witness to their incendiary consequences, she remains the sole custodian of his artistic legacy. When they met, she was an art student, almost 16, and 17-year-old Whiteley was instantly spellbound by her.

Together, the wide-eyed teen sweethearts grew into international art rockstars, with Brett’s increasingly complex and contradictory persona swinging them between triumph and disaster. Wendy was the subject of some of his most famous and popular paintings, and was the mother of their only child, Arkie.

Like so many brilliant artists, Whiteley’s ambitious ascent to dizzying heights would eventually meet with a tragic downfall. Having built a tower of artistic statements exploring monumental ideas like Love, Evil, War, Beauty and “Endlessnessism”, he irretrievably fell from it.

Whiteley’s artworks were made across just 30 years, but their ongoing impact on Australia’s creative culture is extraordinary: he blazed a trail that still lights a path forward for a new generation of artists.

This feature length documentary is suitable for middle and senior secondary students in the following study areas:

The pace, style and music used in the film make it very accessible and entertaining. It literally races along through Whiteley’s life and work, providing a vividly compelling and intimate portrait in words and images of this important artist’s life and work.

Love in Our Own Time (ATOM Study Guide)

In a League of Their Own (ATOM Study Guide)

Word: Rise of the Slam Poets, The (ATOM Study Guide)

In My Own Words (ATOM Study Guide)