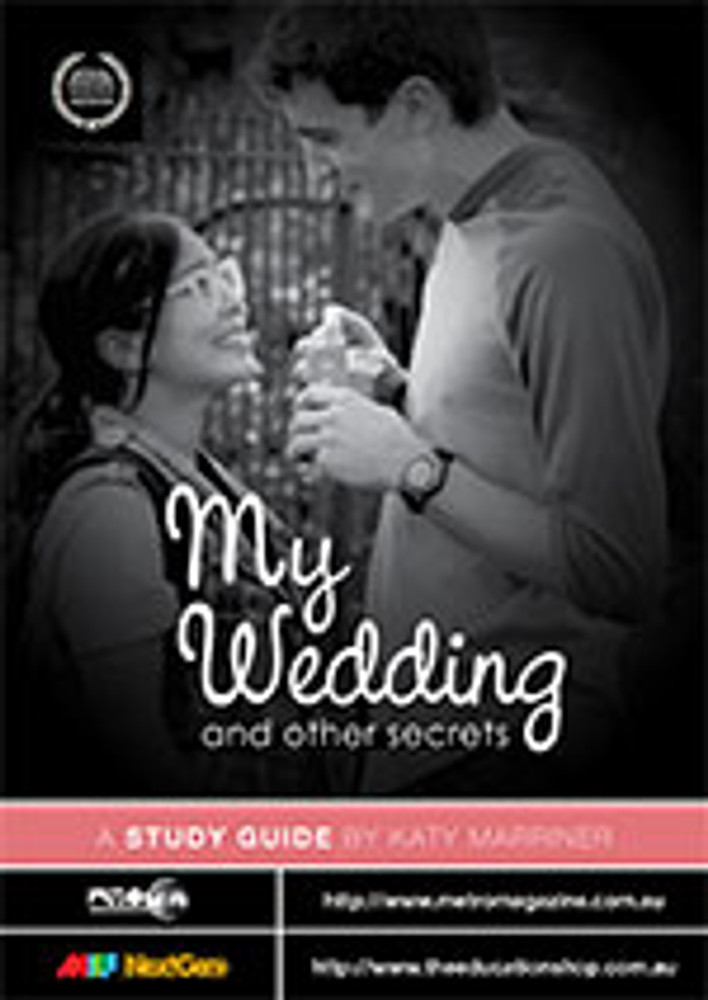 My Wedding and Other Secrets (ATOM Study Guide)

My Wedding and Other Secrets (2011) is a New Zealand feature film directed by Roseanne Liang.

My Wedding and Other Secrets is suitable for senior secondary students undertaking Chinese, English, Literature and Media.

Teachers may find the film relevant to units of work for middle secondary students in the following VELS domains:

Chinese New Zealand born and geeky over-achiever Emily Chu has a can-do-attitude that so far hasn't failed her. That's why Emily is pursuing Film and Television Studies rather than her parents' preference – Medicine. When Emily meets James, a New Zealander, who certainly isn't Chinese, she has found something else she wants – true love. James might like Weet-Biskets and Dungeons & Dragons, but he is tall, handsome and happy to eat the leftover yellow lollies.

Knowing that her parents will disown her if she dates James, Emily insists that they keep their relationship a secret. James is so smitten that he agrees. Impulsively getting married, solves the problem of funding a debut feature film but it only makes being in love all the more fraught for Emily and James. Emily sneaks back and forth from her family home to James' share house, lying artfully to her parents and silencing James with the very real threat of her being disowned.

When Susan's ex-boyfriend Danny dies suddenly and tragically in an accident, Dr Chu pretends that nothing has happened. Danny wasn't Chinese and Dr Chu's disapproval ended the relationship. His insensitivity causes Emily to question the nature of her parents' love and in turn tell some of her secret to her parents. Dr Chu reveals that he already knows about her guailo boyfriend, surprising every member of the Chu family. He issues Emily with an ultimatum. If James learns to speak Mandarin, then maybe he will consider blessing their marriage. James agrees.

Eric might be Emily's nemesis but he's also the co-producer that she needs to save her from failing Film and Television Studies. It is Eric that suggests Plan B. He urges Emily to ditch her hollow action extravaganzas for honest cinematic catharsis. So Emily documents the drama of her life on film, despite James insisting that he doesn't want an audience watching and not asking her parents' permission to film them.

James practises until he's word perfect and then asks Dr Chu if he can marry Emily. Dr Chu approves, and Emily and James think that they can now dissolve one marriage and embark on another. When Mrs Chu learns that James' parents are divorced, she is no longer convinced that Emily is making the right decision.

Emily needs everyone to be happy. And so, long-suffering James is pushed aside as Emily endeavours to prove herself to her mother. When Emily's documentary Girl Meets Boy premieres at a New Zealand Film Festival, her parents and James don't show up. Emily finds herself estranged from the people that she loves the most. In her moment of triumph, Emily is forced to see that she is at fault.

Emily has only been thinking of herself. If all she wants is love, then she has to accept that love isn't just about what she wants. She isn't going to win James back with a speech fit for a Hollywood blockbuster, and her mother isn't going to cooperate just because Emily says she understands her sacrifices. Torn between her family and the man she loves, Emily will have to tell the truth if she wants a happy ending.