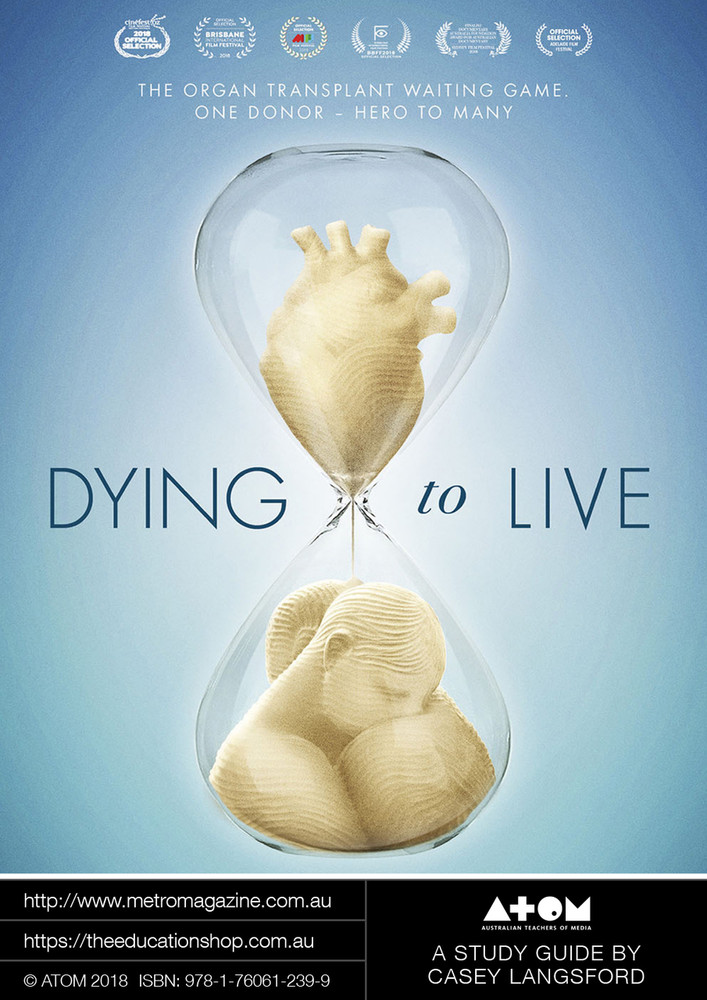 Allan Turner is the father of Zaidee, a seven-year-old girl who in 2004 was the only child in Victoria that year to become an organ and tissue donor after she died suddenly from a brain aneurysm. Having learned that Australia lags behind similar countries on donor rates, Allan has devoted his life to finding a solution. He alerts us to the current state of play: 7 out of 10 Australians say they would donate – but fewer than 4 in 10 have actually registered to do so. Furthermore – if family members were not informed by the potential donor, more than half of donations will not proceed. Allan seeks remedies while we focus, with great emotion, on the Australians in need for whom time is running out ...

Holly Ralph (41) has cystic fibrosis, an incurable genetic disorder afflicting her lungs and leaving them with just 16% functional capacity. Constantly coughing, she needs medication and oxygen to stay alive and relieve the fluid congestion she's drowning in. Holly receives a double lung transplant, and her daughter River cares for her as Holly subsequently recovers, goes skiing, and wins a gold medal at the National Transplant Games. Holly longs to thank her donor family in person, something Australian privacy laws prevent – instead she writes a heartfelt letter which will be delivered anonymously. When Holly is asked to speak at an organ donor event, she reveals she has just celebrated her one year 'lungiversary'.

Kate 'Kitty' Hansen (32) is a diabetic who has been awaiting a pancreas and double kidney transplant for six harrowing years, enduring exhausting dialysis to 'wash' her blood three times a week. Despite her illness, Kate wins a tattoo modelling contest ... then sadly loses a toe to amputation. Experiencing three near-death experiences and constantly in pain, she struggles to keep hope alive for the sake of her parents and boyfriend – all while having dark thoughts of giving it up as she waits each day for 'that call'.

Levi Walters (2) needs a kidney. Both his parents would like to donate as 'living donors', and we see them go through the process of determining who it will be – before learning that mother Alice is the better match. She lovingly gives life to Levi for the second time.

Tony Beret (65) has liver cancer. His only chance of survival is to receive the gift of life from a perfect stranger. His partner, Peter, waits anxiously as the difficult operation is performed. But before long, part of Tony's new liver begins to die ...

Henry Archoo (76) is an Indigenous Bardi man living on country in the Kimberley. Blind in one eye and virtually blind in the other, he awaits a corneal transplant. His wife Barbara cannot walk, and yells directions as Henry pushes her around in her wheelchair – she is his eyes and he is her feet. Henry receives his new cornea and, with a new outlook on life, is able to return to his favourite pastime of painting the landscapes around him.

Peter 'Woody' Wood (48) first experienced kidney failure at age eleven and now awaits his third transplant. After years of dialysis, he's rapidly running out of usable veins for this lifesaving treatment. Against all odds, Woody receives another donor kidney, which threatens to reject within a year ... but then miraculously recovers.

The intensely moving stories of these seven brave Australians compel us to ask: why can't we fix such a fixable problem? It doesn't seem to be because we don't care about organ donation ... is it simply because we don't realise that all we need to do is spend two minutes signing the online register, and have a chat with our families and mates? Doing so will save billions in health dollars – but more importantly – hundreds of lives every year. Dying to live asks all Australians to sign up, donate life, and become physical philanthropists.

This series can be linked to the following subjects in the Australian Curriculum:

And the General Capability of: