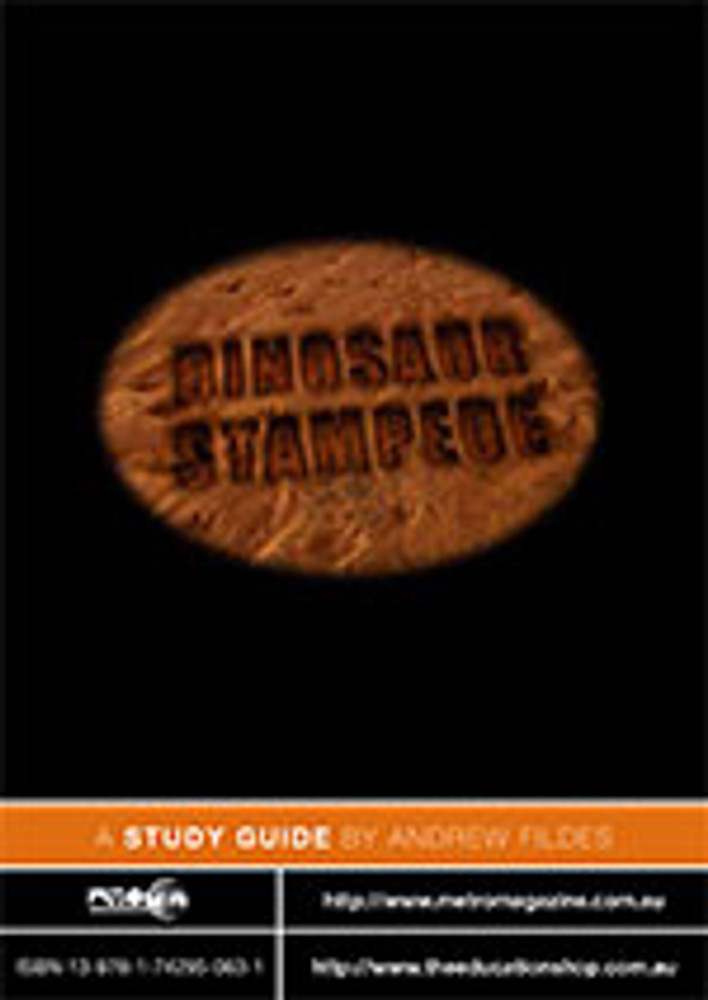 Dinosaur Stampede is a whodunnit; the story of the hunt for a fearsome predator previously unknown in Australia. The forensic evidence is a set of tracks left in the mud of Western Queensland over 100 million years ago. Scott Hocknull of the Queensland Museum and Peter Falkingham of the University of Manchester set out to solve the mystery. Using decades of research, the expertise of palaeontologists around the world and advanced technology into dinosaur behaviour, they try to recreate the 'scene of the crime' to find out more.

The tracks at Lark Quarry were left 97 million years ago when Australia was a colder, wetter place and the now-arid plains of Western Queensland were rich with swamps and lakes. At some point, a herd of dinosaurs crossed a mudflat and left a clear set of tracks – clear enough for us to draw some quite exciting conclusions. For a start, they were running – fast. There are many examples of dinosaur tracks around the world but the Lark Quarry find seems to be the only one where the tracks suggest that the dinosaurs were moving at speed.

How can we tell they were running? We can tell by the spacing of the tracks and the way that the claws bit deeply into the mud. The fleeing dinosaurs left the prints of a typical ornithopod but mixed with them were smaller tracks of little carnivores, coelurosaurs, which were animals the size of a chicken that lived on insects, frogs and other small prey. They were running as well.

What were they running from? The herbivores were quite big so it had to be something really big and scary. The only clue is another set of prints – those of a typical big predator. So what are the possibilities? When the Lark Quarry tracks were discovered there was no fossil evidence at all in Australia of large predators such as giant theropods, like the infamous Tyrannosaurus. But the prints are clear, large and show long claws.

Is it possible that the fleeing herd of ornithopods were under attack by a big theropod, intent on a kill? Or might the different animals have crossed at different times? Why are all the little carnivores hanging out with the herd? Exactly what kind of animals were they; how big were they; how fast were they running? The search for answers to these questions and others takes the researchers around the world – to Wyoming in the USA, Spain and to Scotland's Isle of Skye. In these locations they study similar dinosaur tracks. Clever formulae are used to calculate the size and speed of the animals. High-tech LIDAR (Light Detection and Ranging) imagery is used to reveal the angle and direction of the prints.

Evidence comes to light of previously undiscovered dinosaurs – big ones – in the same area. At least one is a large theropod predator, big enough to kill the ornithopod grazers. The bones had been hidden because they circulate through the soil, finally coming to the surface. Several are found on a local property and provide hard evidence of some of the running animals for the first time.

After examining all the evidence, the researchers reach a carefully considered conclusion. Although the smaller dinosaurs running in panic are known only from trace remains, the killer is now identified as one of the most fearsome hunters ever to roam the Australian landscape.