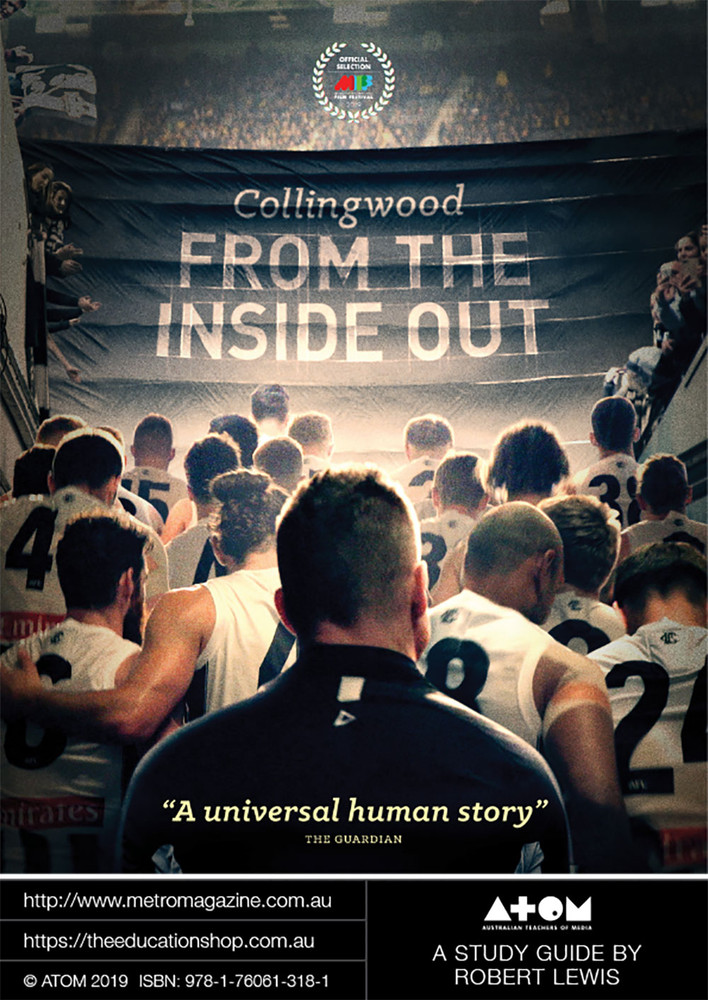 From the Inside Out (Josh Cable and Marcus Cobbledick, 2019) is a 60-minute documentary focusing on four individuals within the Collingwood Football Club in the Australian Football League.

It is not a film that traces the history of the club, or analyses the 2018 season (when Collingwood fell agonisingly short of winning the premiership by one kick), but looks at the personal lives of three players, Jarryd Blair, Brodie Grundy and Adam Treloar, and the coach, Nathan Buckley.

At the start of the 2018 season not even the most loyal fan gave the Magpies a chance of making the finals. After several years of unacceptable results, frustrated supporters and media were calling for coach Nathan Buckley to be sacked. There had been a major club review, and one of the recommendations was that Buckley had to change his coaching style.

Buckley responded to the need to change his own ways of interacting with the team, and even encouraged his players to open up to each other in a deeper, more meaningful way. It was challenging: these were young men who weren't used to revealing painful stories from their past and embracing vulnerability.

Gradually, a more connected, selfless group shifted the culture at the club which led to a surprise result – on-field results started to improve as the players began to believe in themselves and each other.

The film is a raw and honest portrayal of the impact that the pressures of being an elite sportsperson and being in the media spotlight has on a group of individuals. As NATHAN BUCKLEY bears the brunt of the pressure of being an AFL coach, how does he adopt the more nurturing qualities needed to be a leader of young men?

ADAM TRELOAR's season is just as testing. Struggling with anxiety and feelings of unworthiness, just getting himself on the field is a battle. Adam talks openly about the impact this has on his game and his teammates around him. How can he improve as a player if he can't conquer his own self-doubts? And then in a freak event, he tears both hamstrings. Sidelined for most of the season we follow Adam's fight to get himself physically and mentally back in the team.

BRODIE GRUNDY is not your average footy player. Sensitive, bright, a university student. He loves footy but he has passions outside of the game. As he grows into one of the team's most valuable players, Brodie questions whether football is enough for him in life.

And the veteran JARRYD BLAIR, a mainstay of the club in former years. But with younger players coming through and hitting better form, can he prove himself worthy of a spot in the first team again? Having welcomed his first son he needs a stable income. But spending the majority of the season in the club's reserves side means everything rests on a tense and emotional end of year meeting with Bucks.

Filmed over the 2018 season with unprecedented access to the inner workings of the club and its personnel, we train, travel and live with the key characters of an unbelievable season. We share their tears, their joy, their struggles, and their achievements and failures.

While the film is about four individuals in one team during one year, it is universal in its messages and insights not only to other football teams, but to all young men and women who are placed under public pressures, and who need to know how to be able deal with those pressures.

From the Inside Out is a suitable classroom resource for secondary students of:

Inside the G (ATOM Study Guide)

Inside the Firestorm (ATOM Study Guide)