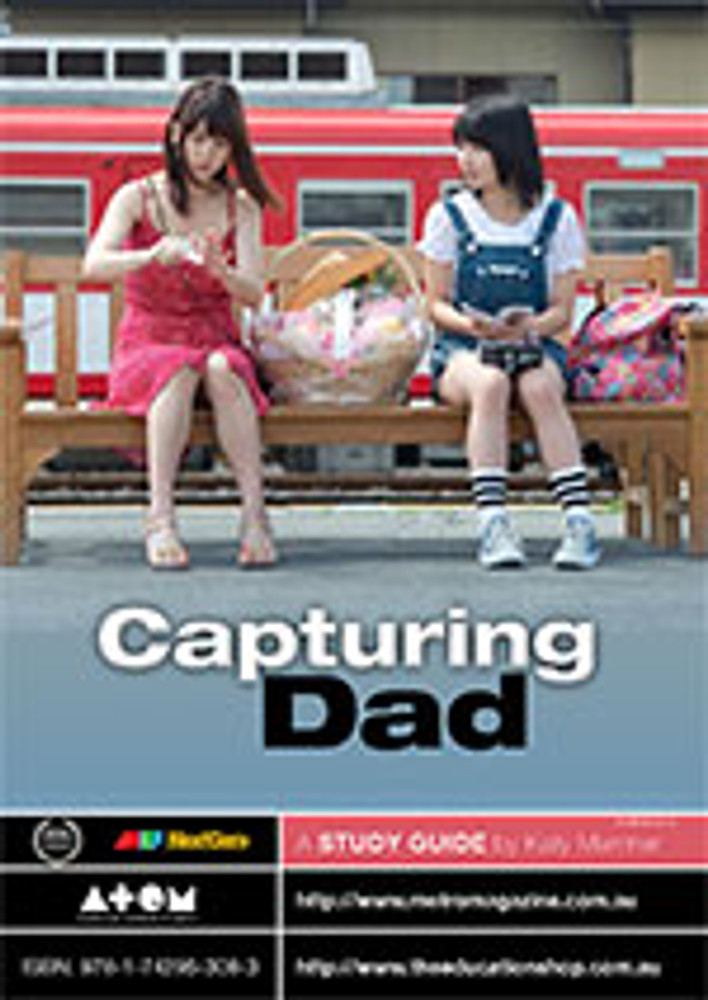 Capturing Dad (2012) is a Japanese drama directed by Ryota Nakano. Capturing Dad is suitable for secondary students in Years 9 and 10. The film can be used as a resource in the domains of English, The Arts (Media Studies), Languages (Japanese) and Physical, Personal and Social Learning (Interpersonal Development). The film is a suitable text for study in VCE English, Japanese and Media Studies.

Learning that her ex-husband Masataka Nishimori (Satoshi Nikaido) is dying of cancer and doesn't have much longer to live, Sawa Higashimura (Makiko Watanabe) sends her daughters, seventeen-year-old Koharu (Nanoka Matsubara) and twenty-year-old Hazuki (Erisa Yanagi) on a cross-country trip to visit their estranged father and say their goodbyes. Sawa's only request is that they give their father a get-well-soon fruit basket and take a photograph of the father they barely remember. The sisters reluctantly agree to obey their mother's requests.

Masataka passes away while Koharu and Hazuki are en route. Their mother calls to inform them of the news and that the sisters are now expected to attend their father's funeral and pay their respects to their father's family.

Arriving in rural Ashigara, Koharu and Hazuki are greeted by their seven-year-old half-brother Chihiro (Kaito Kobayashi). The preparations for the funeral are in full swing and their Uncle Tetsuji (Kenichi Takito) and grandmother are pleased that the girls are in attendance. Yet Koharu and Hazuki are ill-equipped to deal with the situation, especially their aunt's accusations that they are only interested in the inheritance.

Sawa may still be bitter about her husband's infidelity but her daughters are now facing a more daunting task than visiting their father in hospital. She decides to take leave from work and attend the funeral. A text message changes her mind. Her daughters have the strength to cope without her and she is proud of their courage and resilience.

Uncertain of why they are paying their respects to a complete stranger, Koharu and Hazuki decide to leave before the funeral is over. Their uncle is disappointed but he bows respectfully and the sisters make their way to the train station. An argument between the sisters changes everything yet again. Going home is not going to help Koharu and Hazuki come to terms with their abandonment issues, and besides, they have not yet taken the photograph of their father.