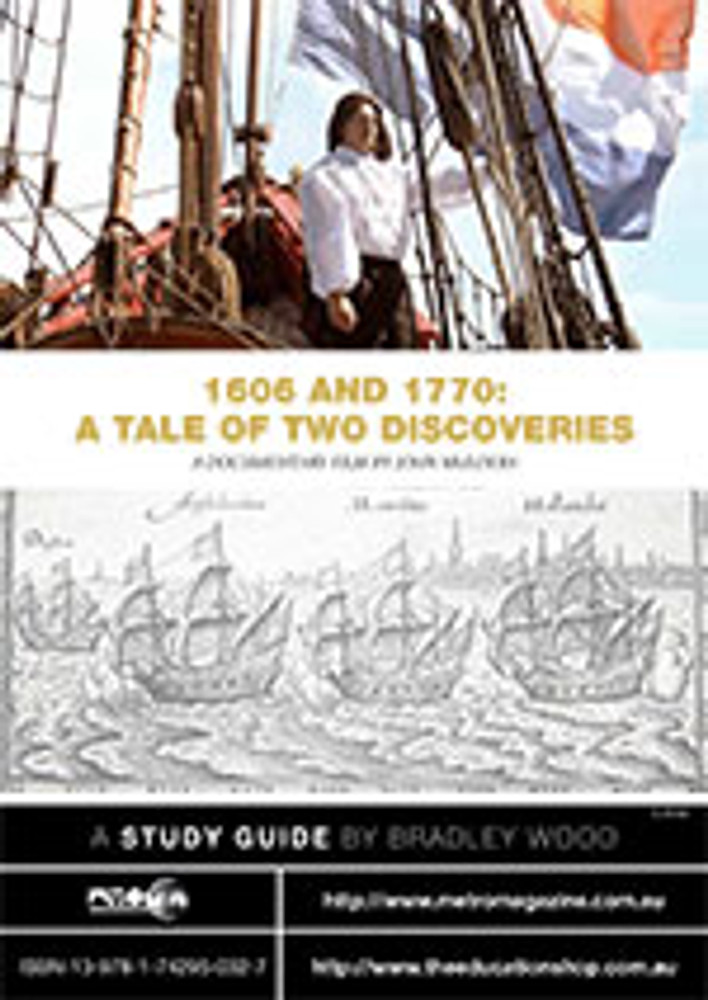 The documentary 1606 and 1770: A Tale of Two Discoveries (John Mulders, 2010, 53 minutes) explodes a number of the myths and misconceptions that have grown up around the history of the charting of the Australian coast. It reminds us that James Cook was a relatively late addition to the long list of explorers that encountered Australia, and which included Dirk Hartog, William Dampier and Abel Tasman. Even more remarkably, the film focuses on the fact that the most deserving and least rewarded explorer in terms of public recognition is the Dutchman Willem Janszoon, who was the first recorded European to land on the Australian coast in 1606 and also the first to interact with Indigenous Australians.

Most Australians when asked to give the date of European discovery of Australia and the name of the explorer would nominate James Cook in 1770. The mythology of Cook's discovery was reinforced in 1970 with the Bicentenary celebrations: generations of Australians have grown up with this idea firmly embedded in their ideas of history and national identity. The documentary points to celebrations such as those in Cooktown, which lionise James Cook, as part of the reason for the general amnesia about Willem Janszoon, but it also looks at other factors. Like most national stories the development of our founding story and how it came adrift from our actual past is a complicated one.

The documentary puts forward various reasons for our long held bias in excluding the Dutch from our general history. They include the decline of Dutch power, the trade rivalry and jealousy between the English and the Dutch, that little is actually known of Janszoon and no portrait exists, and the fact that the eventual colonisation and exploitation of Australia was by the English and not the Dutch. The main argument is that the English did not want to jeopardise their claim on the entire continent by giving any prominence to a prior Dutch claim.

The focus of people determines what they include and what they ignore in writing down their history. What they ignore or leave out can be just as revealing about their sense of identity as what they leave in. To Australians the most attractive story has been a simple story of discovery by a great English navigator and subsequent claiming, taming and settlement of the nation as an English colony. The mythic components of Cook's 'discovery' of Australia that most Australians seem to have absorbed are 1. Landing in Australia was part of Cook's assigned mission 2. Australia was the Great South Land he was searching for. 3. In his own time Cook was famous for the 'discovery' of Australia. 4. Cook considered himself a success because he 'discovered' Australia.

John Mulders uses the format of a fictional court case to show all these points to be false. This is done by thoroughly establishing the remarkable fact that the first European to chart and set foot on Australian soil was Willem Janszoon (or Jansz), though he is now little remembered or commemorated. Both Janszoon and Cook appear as witnesses and their testimony is mixed in with relevant historical information as well as commentary and explanations by historians.

Finally the documentary calls for a more even-handed and inclusive approach to our history so that the full story of when Europe first came to Australia is more commonly known.

1606 and 1770 is relevant to the senior state history curriculums in that it asks historical questions that use analysis of various sources to understand past interpretations and reassess them. The investigation of this historical debate provides a framework for students to develop an understanding of terms and concepts as well as a platform to use their own individual research to examine and gather evidence, challenge established perspectives and draw conclusions.

The language used in the documentary, especially in the fictionalised courtroom scenes, is sophisticated and best suited for senior students.