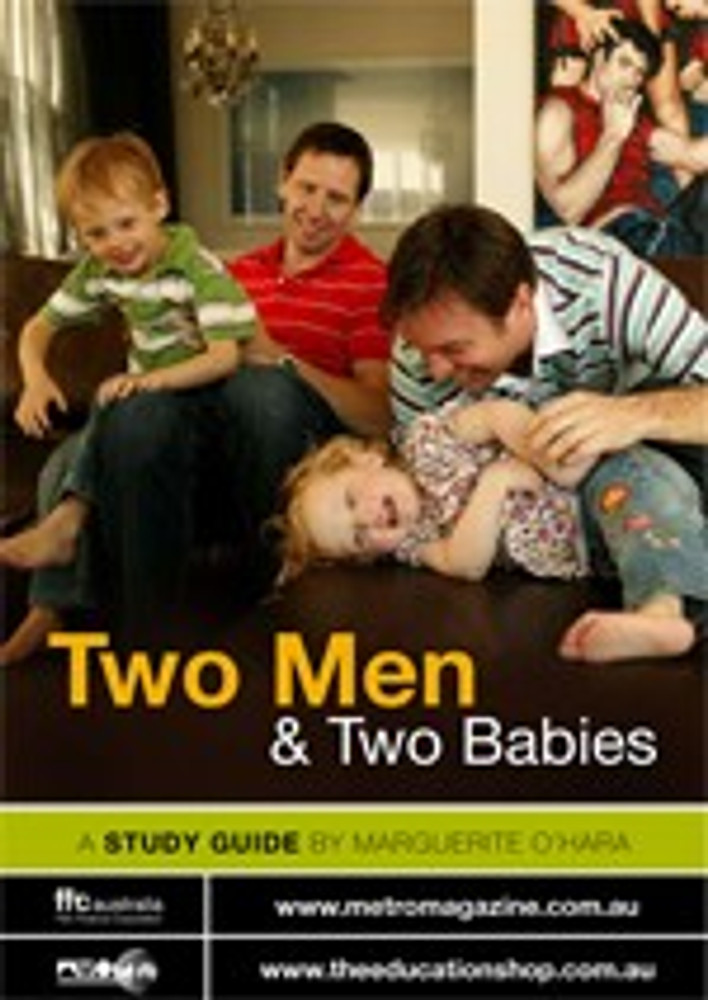 'What is a mum? What is a dad? What is a parent?' The three questions at the start of this guide are central to this documentary about different ways of parenting. Two Men & Two Babies provides a unique insight into the fascinating 'brave new world' of reproduction and parenthood, tracing the conception, birth and life experiences of a new generation of children born into gay, male families. Two Men & Two Babies is a 52-minute documentary that takes audiences back into the lives of Tony Wood and Lee Matthews, one of Australia's first gay male couples to take the controversial step of creating a family through commercial surrogacy. The process of commercial surrogacy is illegal in Australia but in the United States the fertility industry is a multi billion-dollar business. The first documentary, Man Made: The Story of Two Men and a Baby explored Tony & Lee's unrelenting desire to have a child, their decision to pursue commercial surrogacy, and their fraught journey to Cedar Rapids, Iowa for the birth of their son Alexander to a surrogate, Junoa.

Five years on and Tony and Lee now have two children – Alexander and Lucinda. These children have no mother. They are at the forefront of a new generation of babies being conceived by gay male couples who can afford to access new reproductive technologies originally developed for heterosexual couples experiencing fertility problems.

In a political environment where gay couples are demanding legal recognition of their alternative family structures, Two Men & Two Babies captures the particular experiences and challenges facing Tony, Lee and their children. What are the differences and similarities between 'gay families' and 'conventional families', especially in regard to gender roles? In this social experiment of gay parenting, most striking and unexpected, is the relationship that develops between Alexander and Lucinda and their surrogate, Junoa. Audiences were fascinated in the first documentary by Junoa. She is attractive, articulate, compassionate and altruistic. In many ways, audiences latch onto her as a mother figure that is otherwise missing. However Junoa agrees to give up the babies she carries for over nine months and makes money from the experience. This is an exchange that is foreign to Australian audiences, even though Junoa's character does not fit the stereotype of a financially or emotionally struggling surrogate. Two Men & Two Babies delves deeper into Junoa's motivations, expectations, and experiences of surrogacy, its impact on her life and family, as well as her ongoing relationship with Tony, Lee, Alexander and Lucinda.

Two Men & Two Babies provides a unique insight into a fascinating 'brave new world' of reproduction and parenthood and is destined to become the new queer Seven Up! (Paul Almond, 1964).