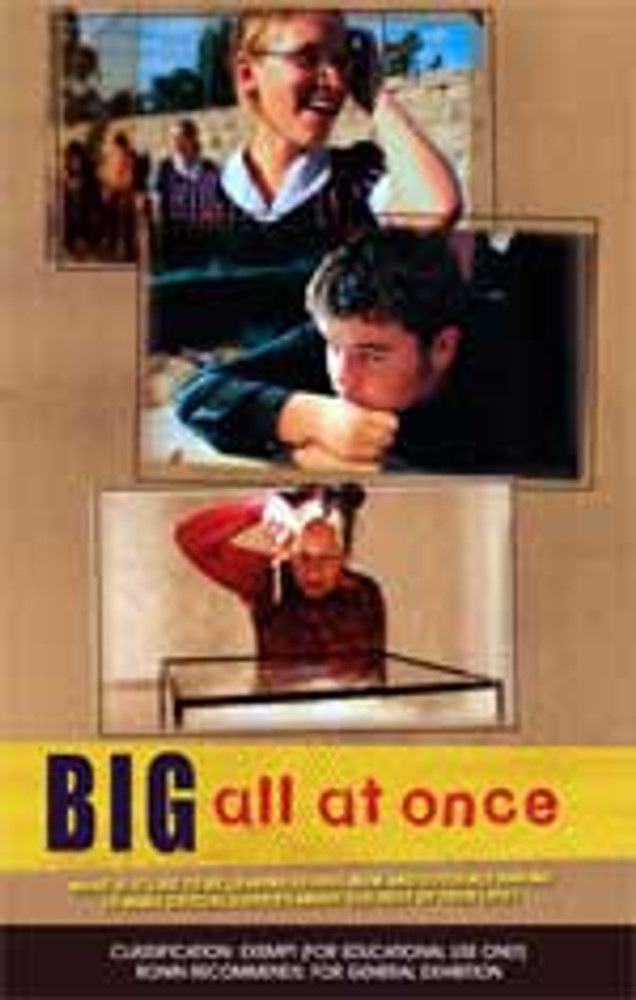 Big All at Once

What is it like to be leaving school and suddenly having to make crucial choices about your life? This documentary intimately follows three different 18-year-olds, as they are spat out of high school and struggle to piece together their adult identities, in their own way. Three teenagers - all from different worlds, all face the same, painful transition - the six months between being spat out of high school, to entering the unknown adult world. Lara lives in Sydney's upper North Shore and attends a private school in a world that strives for perfection. Nick is a wry young man from a boys' public school, who is interested in politics and hopes to be a musician. Simona lives in a working class suburb with her Serbian family, and retreats from their domestic conflicts into her private world of vivid pop idols and collected art. We meet the three teenagers as they embark on the intense stress of their final high school exams. Lara frantically selects the right pens to help her get higher marks, while Nick digs for books amongst his clutter of music equipment and tries not to freeze up from the pressure and hype. A few days into exams, Simona's father locks her out of home when her parents unexpectedly separate - she can't even get her things to study. As soon as the HSC is over, it's time to party. Nick goes to local punk gigs in garages where man-sized boys rumble like maniacs. For her formal, Simona painstakingly creates a replica dress of Winona Ryder's in the film Edward Scissorhands - only to be left barefoot at the end of the night without a home to go back to. Lara returns from schoolies on the Gold Coast, exhausted and wretchedly hung-over. Judgement Day soon arrives. Lara gets a university entrance score of over 85, but still feels she could've done better. Simona is delighted to get 72, "considering it's been the most fucked up year of my life." But Nick dumbfoundedly stares at the score on his computer screen - 48.8. He and his parents are in shock - nobody knows what to do.

Straight away, they have each to start making big decisions about their futures. Simona goes to art school interviews, but is undecided. Lara, overwhelmed by feeling in limbo before university starts, visits her estranged father in Scotland. And Nick mopes around the house watching TV, being hassled by his mother - to find a job, to do something. As each embarks on a new journey, new identities painfully but gradually take shape. Nick's band records a CD and is interviewed on radio. Simona creates a radical art school project and finds a new home - in her art. But Lara grows increasingly lost at university - wondering why she followed a path without purpose or passion. As we watch them each strive to become their own adults - still deeply uncertain - we see how important it is to draw on the things that they love, as they try to work out who to be. Big All At Once gets close to its subjects - capturing the human moments in these teenagers' lives. An observational documentary with humour, mood and warmth, this film empathises with and ultimately celebrates how each of its subjects is funny, brave and wise in their own way.

Once upon a Time in Cabramatta

Once More on to the Beach

Going Nuts All At Once: Jack McCoy and the Surf Film

Once Upon a Time in Punchbowl

Once My Mother (DVD)