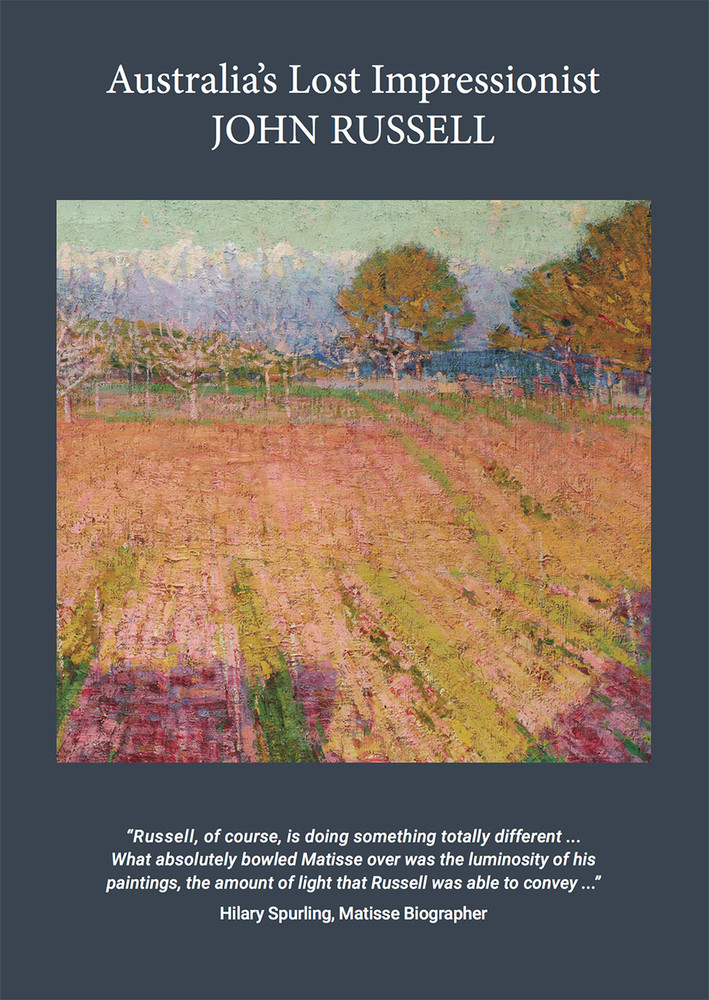 Australia's Lost Impressionist – John Russell tells the fascinating story behind the only Australian artist at the centre of the Impressionist movement in France and how his famous friendships forever changed the way the world sees colour. A close friend of Claude Monet, Vincent van Gogh and Henri Matisse, John Peter Russell was himself a great vanguard painter, as well as a magnetic personality and long-term inhabitant of Belle Île, a gorgeously wild, picturesque island that has had an outsize impact on the development of modern art, from Monet and Matisse through to Ellsworth Kelly. Russell is one of the most interesting figures in Australian art, and a crucial figure in the story of Impressionism and post-Impressionist art in general.

John Russell was handsome, wealthy, debonair and being Australian, quite exotic in nineteenth-century France. Yet despite his own artistic accomplishments and his pivotal role in the development of modern art, his name and his art have been largely unrecognised outside rarefied art circles. This documentary explores his enormous legacy on twentieth-century art through his paintings and his friendships. It also provides a vivid picture of what it was like to be an Australian expatriate living and working in Europe in the 1880s.

Australia's Lost Impressionist – John Russell would be an excellent film to show to secondary and tertiary students of visual arts and art history. The documentary is also a fine example of a filmed biography, drawing on a range of sources, both contemporary and from the archives, to create a vivid picture of an Australian who chose to study, work and live in Europe. While it is always most satisfying to see an artist's work firsthand in a gallery or other exhibition space, this is not always possible. However, documentary films offer a way of seeing not only the range and style of an artist's work but also the context of the artistic development, with a number of people helping tell the story. The film raises questions about how an artist's work becomes known and appreciated. How does one artist become famous, their work highly valued and their legacy secure while others languish in the margins of history until someone is prompted to tell the story and gather together the work to exhibit? Is originality and newness of creative work always the only criteria by which we judge an artist's success, whether in painting, writing or music? What part does fashion and newness play in the way an artist's work is regarded over time?

Curriculum areas relevant to this documentary include:

Art History:
Where does the work of this artist fit into Australian and European art movements? What makes his work important in art history?

Visual Arts: Painting, Colour and Design:
What does Russell's work bring to our understanding of representing colour and light in nature through his brushwork? All Visual Arts studies include responding to the work of other artists. This includes exploring, responding to, analysing and interpreting artworks. In both making and responding to artworks, students consider a range of viewpoints or perspectives through which artworks can be explored and interpreted. These include the contexts in which the artworks are made by artists and experienced by audiences. The world can be interpreted through different contexts, including social, cultural and historical contexts.

Australian Biography:
Identifying and understanding the many resources available to a biographer.

Australian History:
What access did artists in the nineteenth century have to international developments in the visual arts?

Artistic Movements:
Context, place and time as key elements in composition and developing style of an artist.

Film Studies:
Utilising a range of written sources such as letters, the expertise of enthusiasts and scholars and the artworks themselves to create a comprehensive picture of an artist and the worlds in which he lived and worked.