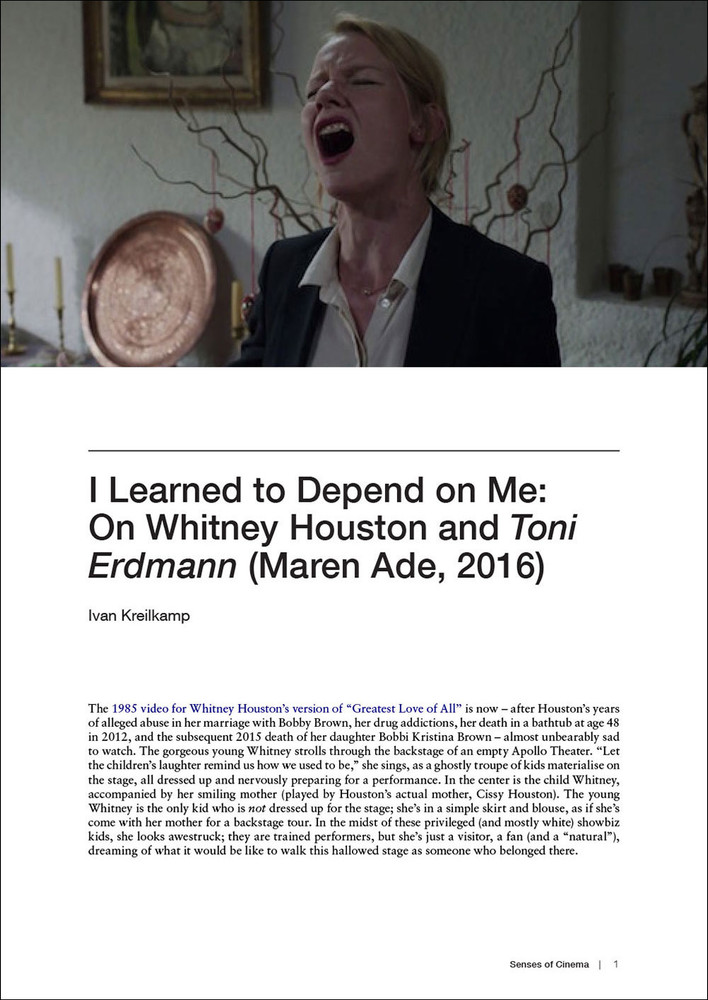 I Learned to Depend on Me: On Whitney Houston and 'Toni Erdmann'

The 1985 video for Whitney Houston's version of 'Greatest Love of All' is now – after Houston's years of alleged abuse in her marriage with Bobby Brown, her drug addictions, her death in a bathtub at age 48 in 2012, and the subsequent 2015 death of her daughter Bobbi Kristina Brown – almost unbearably sad to watch. The gorgeous young Whitney strolls through the backstage of an empty Apollo Theater. 'Let the children's laughter remind us how we used to be,' she sings, as a ghostly troupe of kids materialise on the stage, all dressed up and nervously preparing for a performance. In the center is the child Whitney, accompanied by her smiling mother (played by Houston's actual mother, Cissy Houston). The young Whitney is the only kid who is not dressed up for the stage; she's in a simple skirt and blouse, as if she's come with her mother for a backstage tour. In the midst of these privileged (and mostly white) showbiz kids, she looks awestruck; they are trained performers, but she's just a visitor, a fan (and a 'natural'), dreaming of what it would be like to walk this hallowed stage as someone who belonged there.

Is This an Author I See Before Me?: Anonymous and the Interminable Shakespeare Question

Dr. Strangelove or: How I Learned to Stop Worrying and Love the Bomb (DVD)

Dr. Strangelove or: How I Learned to Stop Worrying and Love the Bomb

Love Me as I Am (ATOM Study Guide)