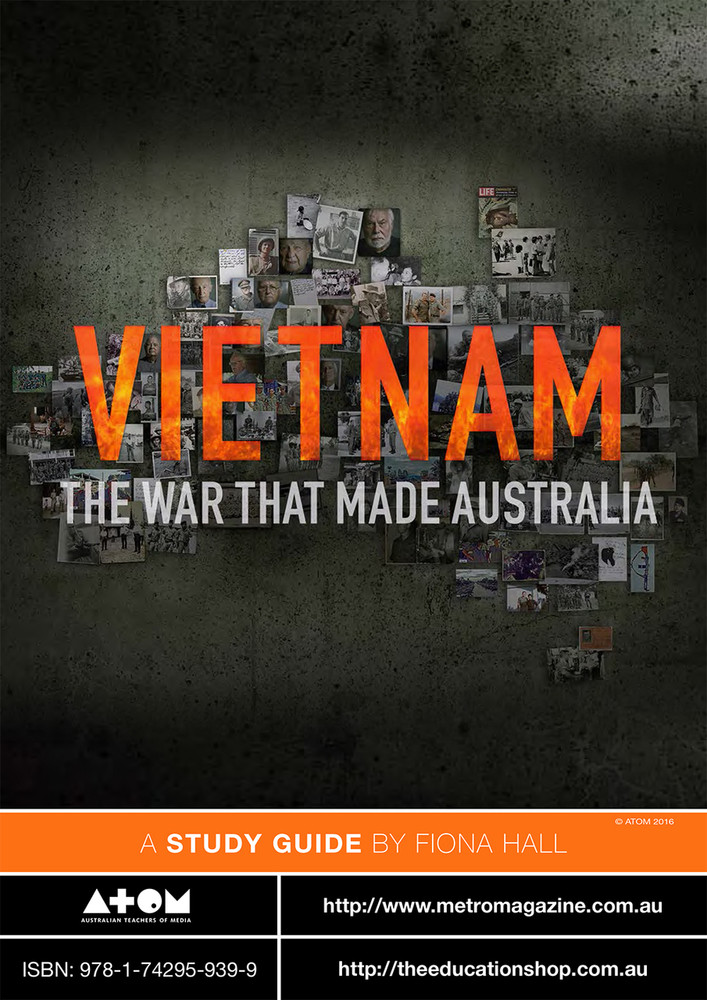 Vietnam: The War That Made Australia (ATOM Study Guide)

Vietnam: The War That Made Australia is a major three-part series that tells the extraordinary story of the Australian Army Training Team Vietnam (AKA 'The Team'), an elite unit of soldiers sent to Vietnam in 1962 to train the South Vietnamese Army to fight the communists.

The first Australian soldiers in and the last to leave, The Team would become the most highly decorated unit of the war, with four Victoria Crosses to its name. It's a little-known story and many of its veterans are talking for the first time. Experts in guerrilla warfare, the men of The Team did not fight with the regular Australian Army, but alongside the South Vietnamese Army, units of native tribesmen and the US Special Forces. Experienced, intelligent men, they were at the sharp end of a vicious conflict in which they witnessed the worst excesses of the enemy and their own allies; many of The Team still bear the psychological and physical scars of their experiences.

Vietnam was also a transformative experience for many Team veterans. These men came from a country steeped in the White Australia Policy, a culture that demonised and excluded Asians, but now the war had them fighting, living and next to men they grew up believing were inferior. In the midst of combat, prejudice melted away and deep bonds of friendship grew between Australians and Asians. Those bonds remained and after the war, Team veterans helped Vietnamese refugees find a new home in Australia. In doing so, this unsung unit of soldiers played their part in transforming Australia into a multicultural nation.

The series opens in 1962, when the Cold War is at its height and communist forces threaten to overrun South East Asia. Red paranoia stalks Australia and many fear that Asian communists will be on our shores if not stopped. Australia responds by sending the Australian Army Training Team to Vietnam to train the South Vietnamese Army. The US Central Intelligence Agency (CIA) is waging its own war, using native tribesmen to form clandestine guerrilla units, and seizes on The Team's experience to help form a ruthless counter-terror campaign to wipe out the communist guerrillas, the Viet Cong. As episode one ends, an already dirty war accelerates with the arrival of hundreds of thousands of US ground forces. Fighting on the front line, Team members witness firsthand the brutality of US tactics.

Episode two sees the war becoming more barbarous, and Team members are embroiled in some of its bloodiest events. Team veterans return to Vietnam to relive their part in the Tet Offensive, a bloody turning point in the war and a nightmare that has stayed with these men to this day.

The final episode looks at the Team's departure from Vietnam in 1972. It is a moment of shame and regret for Team members who feel as if they're abandoning their Vietnamese brothers. But years later, they come to their aid by playing their part in the resettlement of Vietnamese refugees, a moment that heralds a cultural revolution in Australian life – multiculturalism.

The series features candid and emotional interviews with surviving members of The Team, with their Vietnamese brothers-in-arms, and the Vietnamese refugees The Team helped to resettle in Australia. Throughout the series, members of The Team return to Vietnam to relive pivotal and emotionally confronting moments of the war and, in doing so, tackle demons that have haunted them for almost fifty years.

Revelatory and emotional, Vietnam: The War That Made Australia reveals a new side to a war that changed lives and Australia forever.

Vietnam: The War That Made Australia can be linked to the subject areas of English and History within the Australian National Curriculum, particularly for Year 10. It also addresses the cross-curriculum priority Asia and Australia's Engagement with Asia.

Vietnam: The War That Made Australia