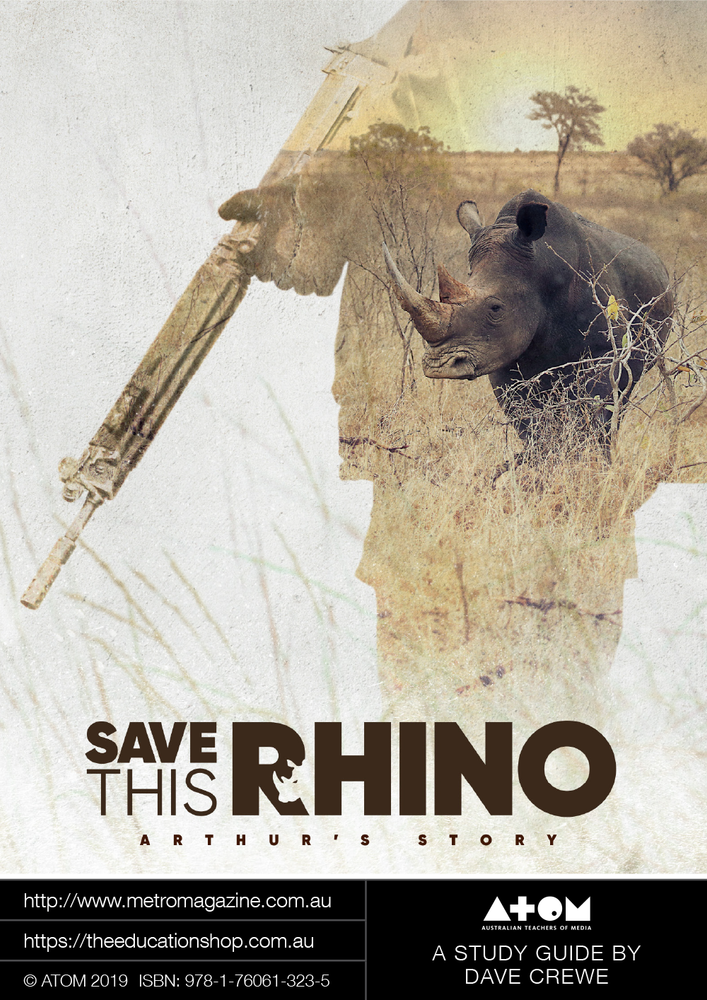 Save This Rhino (ATOM Study Guide)

Save This Rhino is no ordinary conservation environmental documentary seen in the heritage of the creative team led by maverick AACTA winning filmmaker and producer Michael Lawrence (Bra Boys, Fighting Fear, Uncensored with Michael Ware, You and Me, Proximity) and directed by legendary award-winning filmmaker Taylor Steele.

Audiences across Australia, New Zealand, the UK and South Africa will be inspired and moved to action by this powerful new 2-part feature documentary Save This Rhino, airing in the lead up to the World Cup of Cricket in 2019 on National Geographic Channel and then on demand.

Save This Rhino heralds the first major project for THIS. Film Studio, M&C Saatchi Group's film and television production studio.

Shot in partnership with National Geographic, Cisco, Dimension Data and Land Rover South Africa, entirely on Canon equipment, Save This Rhino follows the desperate efforts in South Africa where 80% of the world's critically endangered rhinoceros, whose population is now hovering below 25,000 at the hands of poachers hunting for the highly sought-after rhino horn live. Presently, three rhinos are killed every day and if this continues, the animal will be extinct by 2025. If the ban on illegal rhino horn trade for alleged medicinal properties is removed, it could be as rapid as a couple of years.

Audiences will join Kevin Pietersen and Matt Wright with Graeme Smith in the investigation of Arthur's story and what lead to loss of this baby rhino's mother and become the first audience to see how groundbreaking new, never before seen technology is already making a difference.

This thought-provoking and emotionally charged documentary series charts the struggles, obstacles and wins of the courageous men and women who are determined to fight on the frontlines of this conservational war to save the rhino. Prepare to be inspired by their resilience, unwavering dedication and bravery. An avid conservationist, Kevin Pietersen is deeply committed to saving the rhino and making a real difference in the lives of these majestic sensitive creatures, who until 100 years ago were roaming in their hundreds of thousands across the continent.

Save This Rhino investigates the results of groundbreaking solutions, using innovative, world-class technology by Cisco Systems, Inc. and Dimension Data. This proactive solution using Cisco's technology and Dimension Data services, has resulted in a 96% drop in poaching in the pilot reserve in its first year and has created a safe haven for rhinos to roam freely are hopefully paving the way for a brighter future for the rhino and our planet.

Michael Lawrence filmmaker, producer and studio owner says 'THIS. Film Studio was created to make projects like this. I am very proud to be a part of it and help galvanise action globally to save this species from extinction. Save This Rhino from a creative perspective shows how brands can align with causes in a genuine way to make powerful and meaningful change.'

Save This Rhino is suitable for students undertaking:

There are also further links to Mathematics (Year 10, General Mathematics and Mathematical Methods), English and the Cross-curricular priority of Sustainability.

Due to the sensitive nature of the program, with some graphic poaching content, this ATOM Study Guide is intended for students in Years 10 and up. Providing a content warning is recommended before screening this program.

Can We Save the Reef? (ATOM Study Guide)

Save This Shark (ATOM Study Guide)