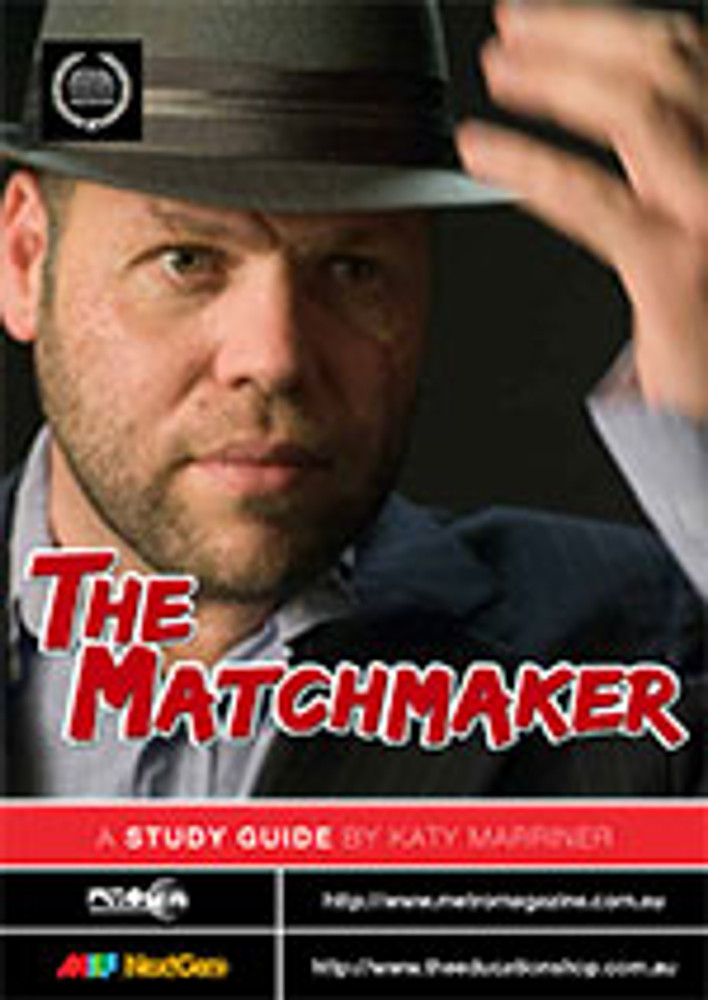 The Matchmaker (2010) is a feature film directed by Avi Nesher.

Teachers may find the film relevant to units of work for middle secondary students in the strand of Physical, Personal and Social Learning and in the following VELS domains:

Haifa, 2006: As missiles from Lebanon fall on the port city during the second Lebanon War, Arik Burstein, a fifty-something writer, makes his way to a lawyer's office with his elderly father. It seems that Yankele Bride, a matchmaker for whom Arik worked as a teenager in the summer of 1968, has died and left money and property to Arik in his will.

The action then shifts to 1968, when Arik first met the mysterious Yankele. While the summer of love had already come and gone in the United States, Israel in 1968 is more provincial. Foreign pop music isn't played on the radio and Israeli rock and roll hasn't been invented yet. The euphoria following Israel's victory in the Six Day War is still strong, and the teenage Arik dreams of becoming a war hero. He is also a voracious reader, who wants to write detective novels like those by Dashiell Hammett.

Arik is uncomfortable about his father's past as a Holocaust survivor. He has heard rumours that all survivors had to commit horrific crimes to save their own lives. Understandably, Arik prefers not to think or talk about his father's life 'back there'. When Yankele, a friend of Arik's father and also a Holocaust survivor, needs an assistant, Arik accepts the position. He is at a loose end and is keen to spend time in the low rent district, an area by the port filled with sailors, prostitutes, gambling, black-market goods and movie theatres. Normally, his parents would forbid him to go anywhere near the low rent district, but because he will be working for Yankele, they allow it.

Yankele sees his matchmaking as a mission rather than a business, particularly because he tries to unite luckless souls. Arik becomes Yankele's spy guy; trailing potential matches to find out if they are suitable. He keeps notes on the prospective suitors and others in the low rent district, which in time become his first attempts at detective stories.

Arik finds himself drawn to the people he meets through Yankele, including Miss Clara, a glamorous woman who hides a great deal of pain behind her perfectly made-up facade. Sylvia, a short-statured woman who was experimented on by Dr. Mengele at Auschwitz, also makes an impression on Arik. Arik begins to learn a great deal about the contradictions of the human heart and how the Holocaust changed the lives of the people around him.

Arik's life at home is changing as well. He finds himself falling in love for the first time, with Tamara, a cousin of his best friend, Benny. Tamara, who comes from a large, protective Iraqi family, has lived in America for years, but is sent by her rich father who Arik knows as Uncle Nadgi, to spend the summer in Haifa. The free-spirited Tamara shocks and entices the innocent Arik with her talk of women's rights, free love and rock and roll. And for Arik, this becomes the summer that changes everything.