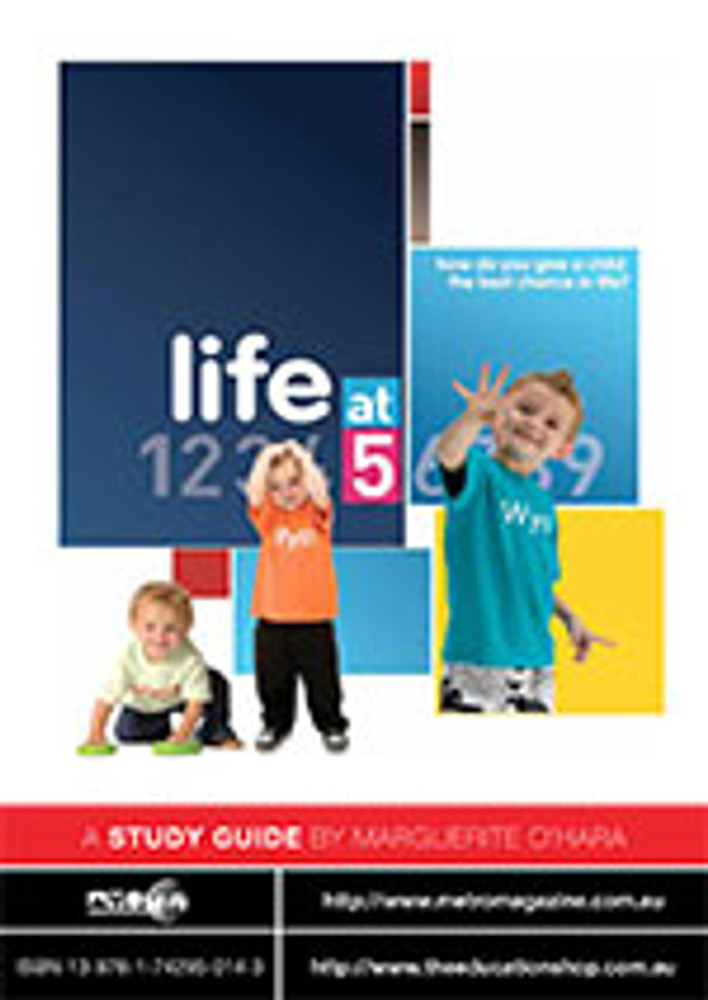 Life at Five is the third instalment in The Life Series, which looks at the ordinary and extraordinary events of eleven Australian children as they learn to deal with many of life's hurdles including death, divorce and the day-to-day challenges of being a five-year-old.

Five years ago eleven children from all walks of life were hand-picked to be filmed and followed on their extraordinary journey through life. And so much is changing.

Now they are five and running towards the primary school gate, our eleven have plenty to say for themselves. They are stepping beyond their own front gate and are increasingly influenced by teachers and peers.

All the favourites are back. Shine, the daughter of the taxi driver in Life at 3 has a few surprises up her sleeve. Then there's Sofia, whose dad was diagnosed with a life-threatening cancer when she was born. She's now back at the hospital in the wake of some devastating news. And Daniel, whose family had to bury a son and a brother back in Life at 3, is facing new challenges as his parents decide to go their separate ways.

Over two episodes, Life at Five tracks our group of children against contemporary scientific discoveries and findings from two areas of child development – childhood resilience and the factors that enhance school readiness.

The Life Series has exclusive access to a wealth of scientific findings from Australia's unique, federally funded longitudinal study Growing up in Australia, in which 10,000 children and their families are interviewed over fifteen years to unveil never-before-captured sociological and scientific data. Life at Five runs alongside this study and combines vivid personality updates, interwoven with never-before-seen archival footage and brand new psychological observations recorded on hidden cameras behind mirrored glass in The Life Lab.

Each 52-minute episode reveals new science on child development against the absorbing and entertaining backdrop of contemporary family life in Australia.

Life at Five: Resilience explores the latest scientific discoveries on the adaptive phenomenon of resilience, to uncover just what it is within a child, as well as the power of relationships with caregivers, which can promote a resilient trajectory.

In Life at Five: Great Expectations the story continues as the children head off for their first day of school. It reveals that success at school relies on three important behavioural characteristics – good communication, ambition to learn and the ability to fit in. As the lives of our children unfold, we grapple with the very essence of what it takes to make us all thriving, creative and happy human beings.

Welcome to Life at Five.

This program will have interest and relevance for middle- to senior-secondary and tertiary students in the following curriculum areas: