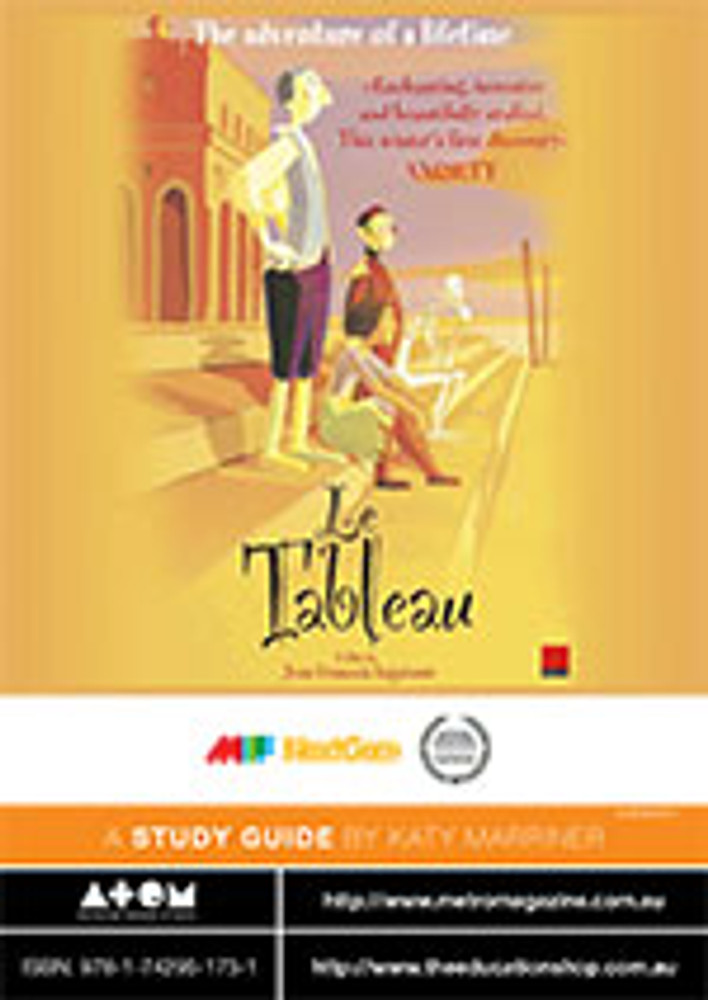 Le Tableau is set within the world of a beautiful but incomplete painting. The painter has abandoned the work, and in his absence the finished characters, the Alldunns, have taken charge. The incomplete characters, the Halfies and the Sketchies, are banished from the castle depicted in the painting. Led by the Great Candlestick, the Alldunns make life miserable for the Halfies and the Sketchies.

Young lovers Ramo, an Alldunn, and Claire, a Halfy, find themselves the target of derision and suspicion. Ramo, unwilling to live without Claire, decides that he must find the painter and ask him to finish what he started. Joining him in his quest are Lola and Quill, who both have their own reason for wanting to meet their maker. Quill needs the painter to save his friend Gum; a victim of two mindless Alldunns, he is now a muddle of lines. Lola is in search of knowledge not only of self but also of the world that may or may not exist beyond the frame of the painting.

The trio's adventure really begins when Lola falls into a painting about a war. She is arrested on suspicion of being an enemy spy. It is while she is being held captive that Lola meets Magenta, a young drummer boy who decides to join the escapees. He wants the painter to stop the never-ending conflict in his world. Reunited with Ramo and Quill in the painter's workshop, Lola introduces Magenta, and their quest to find the painter begins in earnest.

The painter is nowhere to be found. Several portraits, a painting of a harlequin called Orange de Mars, a nude woman named Garance and the painter's self-portrait, offer assistance and advice, and soon the brave adventurers are wandering the streets of Venice. While they do not find the painter, a forgotten tube of oil paint gives Ramo an idea.

Meanwhile, the tension between the Alldunns, Halfies and Sketchies has escalated. The Alldunns' dictatorship is wreaking havoc. Believing Ramo to be a traitor and desperate to assert his authority, Candlestick orders that Claire is captured. His intention is to lure Ramo from wherever he is hiding.

The hopeful foursome head back to the painter's workshop. Lola asks the painter's self-portrait to teach them how to paint. At first he refuses believing he cannot paint, but when he does try, he is surprised to discover that he has talent. He brings Gum back to life and teaches all of them the basics. Now they can return to their paintings and transform their worlds. Magenta brings peace to his painting when he gives every soldier a purple-hued uniform. Quill and Gum paint themselves, and then show the other Halfies and Sketchies that change is possible. Ramo, who has gone in search of Claire, falls into the trap of the Alldunns and is tossed into jail.

The young lovers, condemned to being blackened, are rescued by some Sketchies bent on sabotage and a colourful band of freshly painted figures. The Alldunns cannot help but admire the now bright and bold Halfies and Sketchies. Candlestick is defeated as arrogance gives way to acceptance. The celebrations begin but Ramo and Claire seek privacy. Alone in the gardens, Ramo paints Claire's face and they embrace.

Lola also sneaks away. She may know that she is happy to remain a Halfy but she still has other questions. Back in the painter's workshop, she slips through a crack in the wall and finds herself in the real world. She wanders through a field of wild grass and encounters the painter, absorbed in the task of painting a landscape. He is surprised but happy to see Lola. They talk and she then moves on, after all there is so much to see.

Le Tableau (2011) is a French animated feature film directed by Jean-François Laguionie, suitable for upper primary and junior secondary students. Teachers will find the film relevant to units of work in the strand of Physical, Personal and Social Learning and the domains of The Arts, English, The Humanities and Languages Other Tha