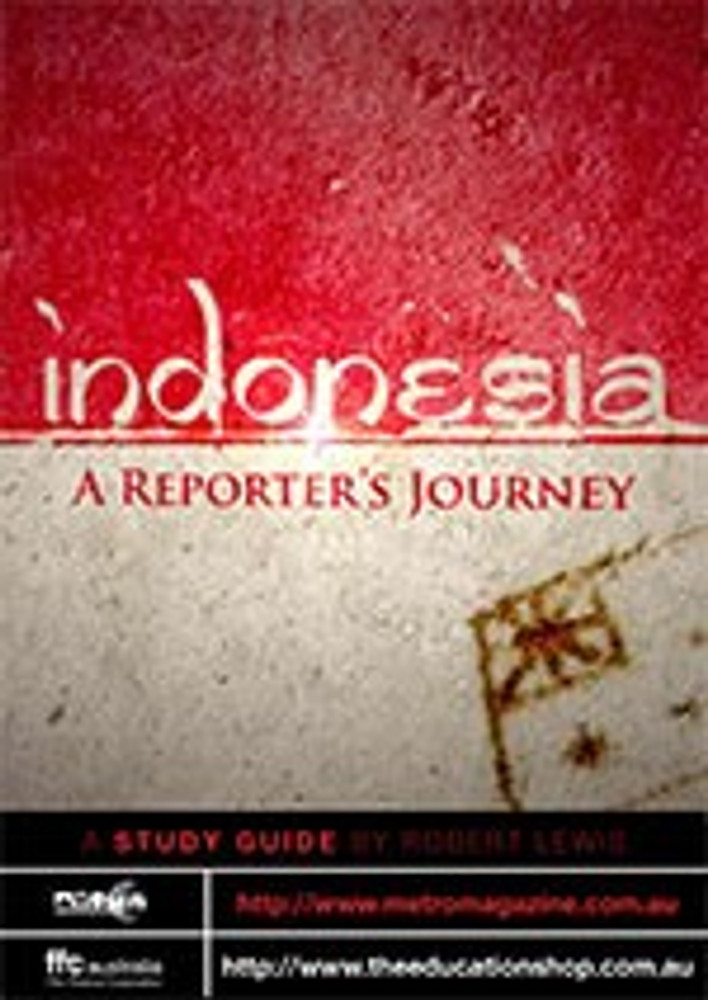 Indonesia: A Reporter's Journey (Chris Hilton, 2008) is a series of 3 x 52-minute documentary programs that trace the relationship between Indonesia and Australia since the Second World War.

Australia's relationship with its enormous, vastly populated, northern neighbour is complex. In an engaging, heartfelt and accessible style, Indonesia: A Reporter's Journey follows journalist Mike Carlton on a journey to explore the historical relationship between Australia and Indonesia through a contemporary prism.

East Timor, the Boxing Day tsunami, the Bali and Jakarta bombings, refugees, the Bali Nine and other recent high profile court cases ... it seems Australians have heard more about Indonesia in the past few years than ever before.

But the story of these two radically different nations on each other's doorsteps has always been dramatic – and complex – from the earliest trading connections, the shared battles of World War Two, confrontation during the cold war, the prosperity and corruption of the Suharto dictatorship and the complexity of balancing our respective national interests regarding East Timor.

Journalist and radio broadcaster Mike Carlton, was a foreign correspondent for the ABC in Indonesia in the late 1960s and has maintained a keen interest in unfolding events there since. Mike meets with former colleagues, old friends, politicians, officials and ordinary folk who have a direct and emotional connection to the key events that have shaped our relationship.

The series has a broad appeal as it provides an accessible approach to a dramatic and significant history that resonates today. Indonesia: A Reporter's Journey takes the historical and contemporary pulse of both nations and finds an enormous amount of goodwill and good humour to outweigh the fear and misunderstanding.

Episode 1 – 'A Difficult Engagement' looks at the period after World War Two when Australia supported Indonesia's struggle for independence from the Dutch to the time when Australian troops fought against Indonesian troops in Borneo. This was the Sukarno era and Mike Carlton was posted in Jakarta during the final years of Indonesia's first president as General Suharto gradually usurped his power.

Episode 2 – 'Most Unlikely Partners'covers the thirty years of Suharto rule when Australia embraced the strong man of Asia despite his abuse of human rights and his family's corruption. Huge numbers of Australians also embraced Bali. But regional stability was the overall mantra and General Suharto and his New Order government provided it.

Episode 3 – 'At All Costs' examines the tumultuous post Suharto years of terrorism, tsunamis, and the smuggling of drugs and people when it became clear to Australia that we had no choice but to commit to the relationship – our mutual security being inextricably linked.