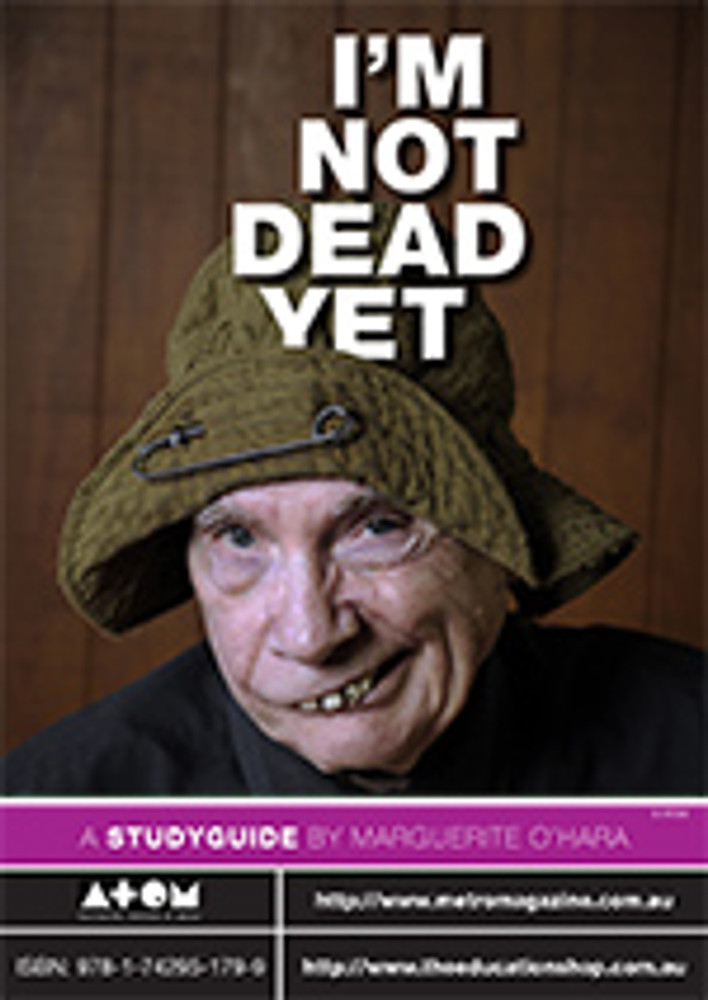 I'm Not Dead Yet is an 'unplugged' road movie which follows Australian country music legend Chad Morgan and his wife Joanie as they travel and perform throughout regional and outback Australia.

Affectionately narrated by rock musician Tex Perkins, the documentary is an intimate portrait of an artist as an old man. It's a film about laughter, growing old and coming to terms with the past. At the heart of the narrative is an enduring love story.

Back in 'the day' (earlier times) Chad moved a lot faster than he does now. He was once an infamous drunk and womaniser – defiant, wild and unstoppable. But now Chad has found his soulmate – the droll, plain speaking Joanie. While Chad performs, roadie Joanie sells the CDs and merchandise.

Chad Morgan fan, musician and songwriter Broderick Smith sums it up this way: 'The King of Country Music, Slim Dusty was the good guy; he was the Beatles. Chad Morgan was the bad guy; he was the Rolling Stones. I dug him instantly. I wondered where the hell does he get what he does from? It was like he had landed from another planet and decided to pick up a guitar. '

In 1952 on the popular and influential radio talent quest, 'Australia's Amateur Hour', a nervous 19-year-old with extraordinarily large buck teeth first performed his self-penned song – 'The Sheik of Scrubby Creek'. It was written in response to his real life, unrequited yearning for a local beauty.

Chad's talent quest debut was simply unforgettable. He was a three-dimensional living, breathing cartoon character dressed in his now legendary 'nappy hat'. Black and white film of his performance shows that his legs were shaking as he let out The Sheik's call – a joyous dog-like howl.

Chad reckons he's played 'The Sheik' more than 10,000 times throughout his six-decade career. He always begins each gig with it and audience members young and old look forward to howling along with their idol. The hillbilly mantra has become an Australian classic. And the teeth have become his trademark.

In the beginning critics tried to categorise Chad as a 'novelty singer'. Today his extensive body of work reveals a consummate bush storyteller with a politically incorrect twist. Chad sings about chasing sheilas, fighting drongos, shotgun weddings, getting drunk and copulating double-decker blowflies.

Chad has recently composed his first new song in 25 years, a tribute to his little known Aboriginal heritage. 'I just kept waking up at night with these words in my head. It went on for a couple of months so I wrote them down and every night I'd write a bit more and then I just put it all together. ' Unlike his usual comic repertoire, 'The Ballad of Bill and Eva' tells the story of his grandmother – the woman who gave him his first guitar.

Today Chad is the last country music legend standing. He has out-sung, out-drunk and outlived his famous contemporaries. When Slim Dusty died in 2005 the heavy title of country music's 'national treasure' was passed on to Chad. Chad's moving performance of 'Bill and Eva' makes time stand still. Fans have tears in their eyes as Chad explains the story behind the song. 'You could tell it came from the heart. Chad's not a fake,' says a fan reaching for her hankie.

Far more than just a cradle to the grave bio–pick, I'm Not Dead Yet is a road movie about laughter, love, romance, music and family, featuring a 'handsome' leading man and a litany of dirty lyrics!

I'm Not Dead Yet would be an excellent film to show to middle and senior-secondary and tertiary students of English, Media Studies / Film Studies and Australian Studies.