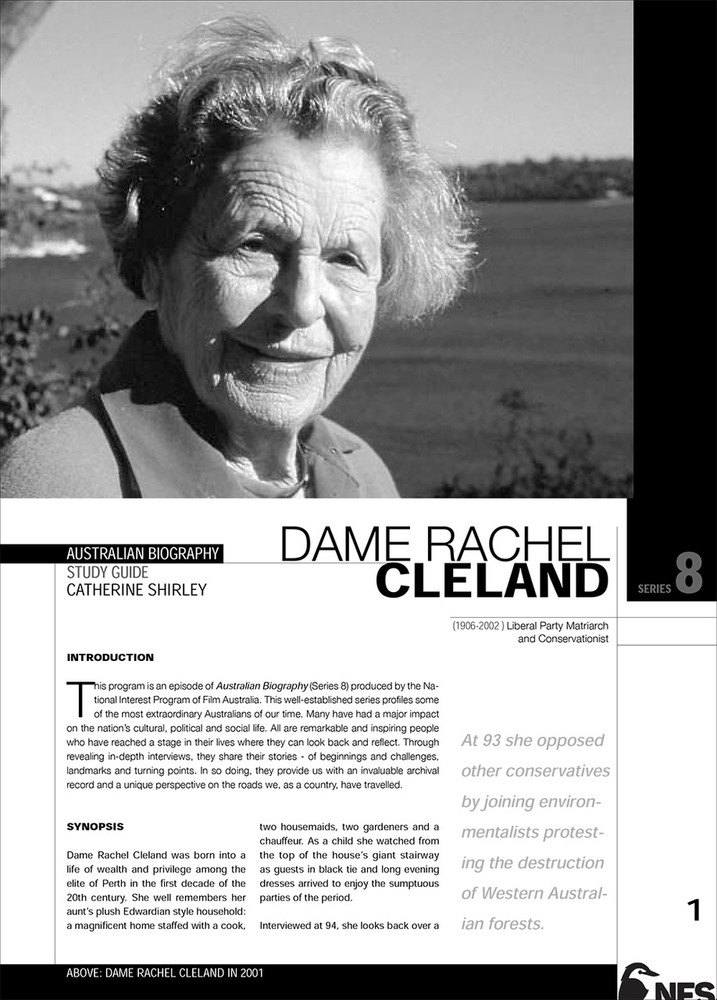 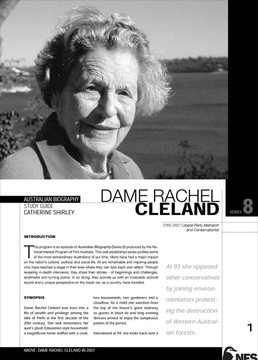 Dame Rachel Cleland was born into a life of wealth and privilege among the elite of Perth in the first decade of the 20th century. She well remembers her aunt's plush Edwardian style household: a magnificent home staffed with a cook, two housemaids, two gardeners and a chauffeur. As a child she watched from the top of the house's giant stairway as guests in black tie and long evening dresses arrived to enjoy the sumptuous parties of the period. Interviewed at 94, she looks back over a life spanning the greater part of a century of extraordinary change. She recalls both world wars, learning the Charleston during the Jazz Age, the heartbreak of the Great Depression and the nation-building excitement of the post-war boom. As with many women of her generation, Dame Rachel was forced to mould her ambition around the demands of others. Although her mother and aunt whose splendid house she so enjoyed were early feminists, their theories did not extend to their daughter and niece. Dame Rachel's early hopes of becoming an architect were rejected outright. Without consultation she was told to be a kindergarten teacher. Accepting the parental authority of the time, she grew to love it. In 1928 when she married her lifelong husband Don, she willingly accepted that he was already married to his career and that her role would be one of supporting him. Unresentful, Dame Rachel says she and her husband were a team and that he shared his work openly with her. In the 1940s, she worked with Don and Sir Robert Menzies in founding the Liberal Party. They remained in public life, experiencing Australia's final period as a colonial authority when Don served as the Administrator of New Guinea from 1952 to 1966. Dame Rachel returned to Perth after her husband's death and continued an active involvement in local Liberal politics. For someone who often accepted the traditional path in life, Dame Rachel is independently minded when she chooses. At 93 she opposed other conservatives by joining environmentalists protesting the destruction of Western Australian forests. She is also outspoken on the need for a more progressive brand of 'liberalism' in the party of which she was a founding member.