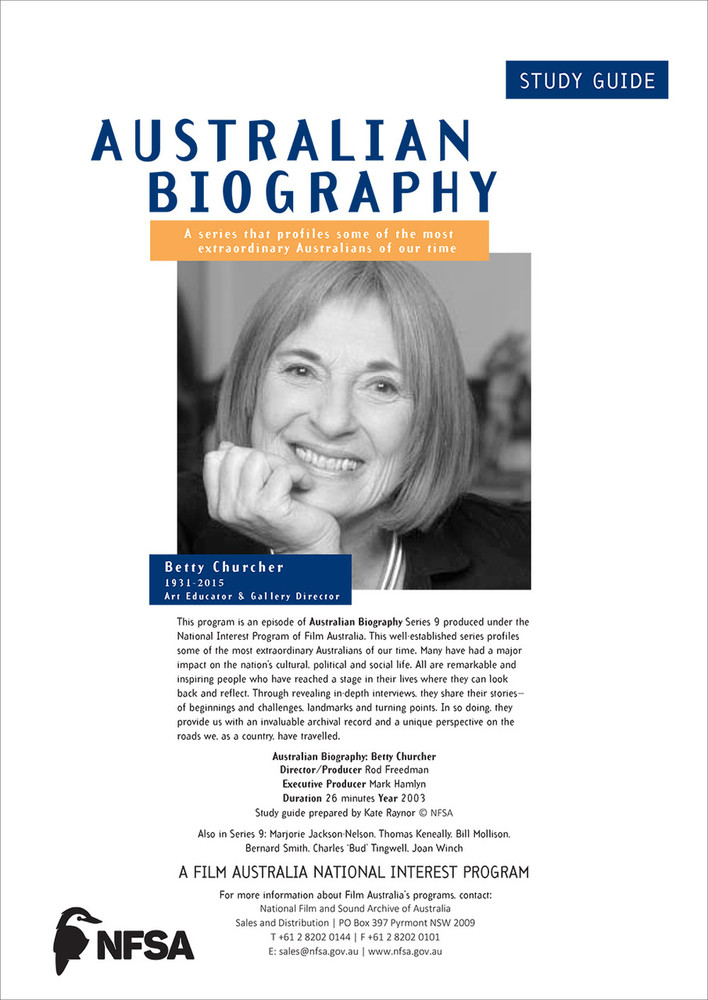 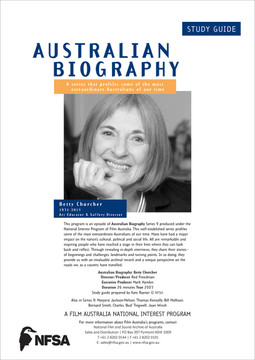 Art has always been Betty Churcher's private and public passion. As an educator and a gallery director, her vision was to make people see art as accessible and relevant. As Director of the National Gallery of Australia from 1990 to 1997, she oversaw both its widening public appeal and its rise as an institution of cultural significance, locally and internationally. The first female director of the gallery, Betty Churcher has been a role model for women for many years. She became the first woman director of a state art gallery when appointed to the West Australian Gallery in 1987. In 1982, she was the first female head of a tertiary institution as Dean of the School of Art and Design at Melbourne's Phillip Institute of Technology, where she had been lecturing. Yet as a child Betty felt that 'just about everything I wanted to do, I couldn't because I was a girl'. Born in Brisbane in 1931, she grew up in a household where her mother and grandmother focused their attention on her brother. Despite her father's view that education 'spoiled a girl', Betty won a scholarship and studied painting at London's Royal College of Art in the early 1950s, where she met and married fellow painter Roy Churcher. Back home, they set up a studio and art school together but Betty gave up painting after her first child. She returned to work—initially as a teacher—when her fourth and youngest son started school. In 1974, after completing a Master of Arts in London, she published Understanding Art, which won The Times 'information book of the year' award. A career in academia  followed along with senior roles on the Australia Council. In this Australian Biography interview, Betty talks candidly of art, family and career and the determination that has driven her to achieve.

This program will have interest and relevance for teachers and students at middle to senior secondary and tertiary levels. Curriculum links include Art, Curatorial Studies, English, SOSE/HSIE, Education, Women's Studies and Personal Development.