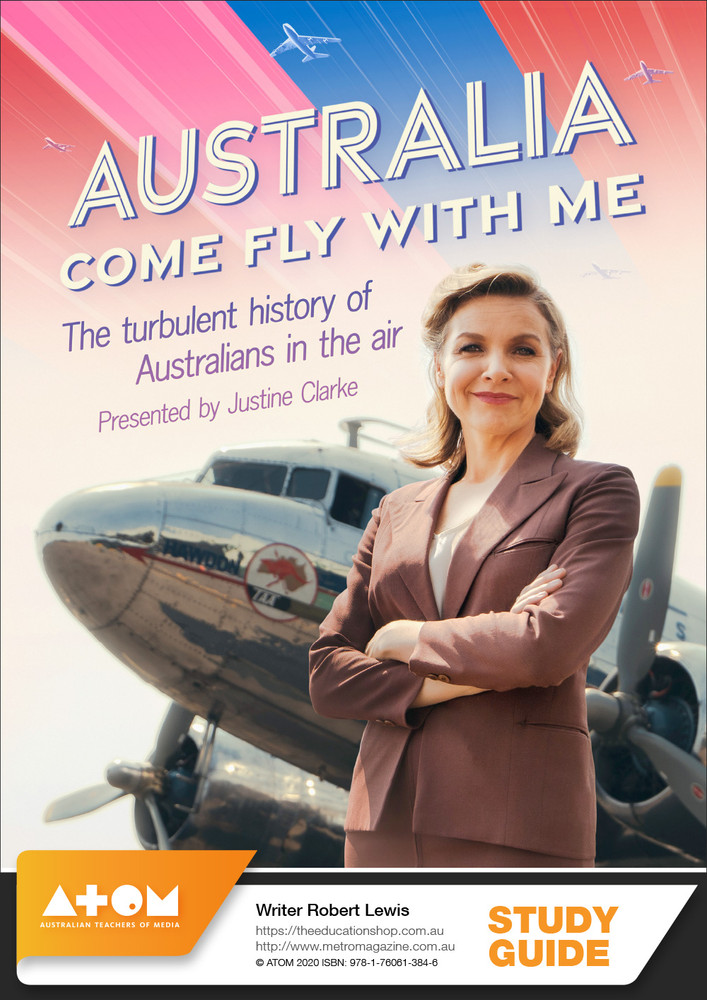 Australia Come Fly With Me (Greg Appel, Bernice Toni, Alan Erson, 3x53 minutes, 2020) is a documentary series tracing the history of aspects of the centenary of Australian civil aviation and the way Australians' pursuit of opportunities in the skies have foreshadowed broad social and political change – especially for women, Aboriginal Australians, Gay men and migrants.

As Australia reaches 100 years of air travel, actor Justine Clarke sets off to discover a turbulent history, that's also the story of modern Australia. Flight promised Australians thrills, glamour and connection – across our vast continent and the world. But it also sparked change – in the air and on the ground. A century ago the Great Air Race saw Australian pilots set out to accomplish a world first – to fly from England to Australia. The nation was captivated by the antics of brave daredevils. Flying would be embraced in peacetime, and an industry would follow. But the early planes were dangerous, and fatalities and air sickness went hand in glove with flying. To quell passengers' nerves, by the late 1930s air hostesses came on board. Bright, vivacious young women seized the intoxicating opportunity to fly across the country.

By the 1950s airline fatalities were of worldwide concern. An Australian scientist was called on to assist. His innovation would transform aircraft safety and benefit the world. The '60s came to embody a new kind of hedonism, and flight crews became key players in bringing the cultural revolution home. Airlines marketed their services through sexualized portrayals of their hostesses – and many flight attendants were themselves joining a sexual revolution. The contraceptive pill had arrived, and some airlines encouraged hostesses to take it. Passenger jets were also changing the way Australians went to war. Sixty thousand Australians fought in Vietnam – more than half flew there on commercial aircraft, staffed by volunteer flight crews. By the 1970s large scale migration would make Australia one of the world's most diverse nations. Flight crews were often first to meet Australia's new wave of settlers. Change was in the air.

Aeroplanes helped Aboriginal Australians like Yingiya Guyula, the first Yolngu pilot, support the Homelands Movement – the return to country from towns and Missions by Aboriginal Australians that began in the 1970s. Airlines were increasingly dealing with a new threat: hijackings. In 1972 Kaye McLachlan and Di Jackson went from hostesses to headlines as an ordinary work day was hijacked. More often than in most other workplaces, LGBTIQ+ Australians chose to come out in the air. In the bohemian cities they could fly to, gay men were finding safe places. But straight white males ran the unions. And after more than 50 years of civil aviation, a female pilot had never flown for a major Australian airline. The fight for equality was far from over. And a deadlier battle loomed, as AIDS took a devastating toll. In the 1980s, a craze for Australiana took off – while Australia's struggling economy was opened up to the world's markets. With economic reform the order of the day, a determined group of hosties filed an anti discrimination case against Qantas. Then pilots walked off the job, demanding a 30 per cent pay rise.

John Moriarty, a member of the stolen generation, was instrumental in bringing Aboriginal art to the world by wrapping it around a plane. The first aircraft in Qantas's flying art series became one of the most photographed jet in the world. In 1995 the government privatised Qantas. The result was cheaper flights, but the glamour days of flying were slipping away. And there was worse to come. Ansett went bust, the September 11 attacks occurred. And 88 Australians were killed in the Bali bombings. As the skies darkened, Australia – a country built on migration – was now deeply conflicted about it. In 2020 Covid-19 dealt aviation its greatest blow in a century. As crews lose their jobs, airlines collapse and Australians are grounded, will our desire to take the skies return as it was or manifest itself in new ways?

Australia Come Fly With Me is a documentary series that is suitable for students in Years 9-12 in:

Australia Come Fly With Me helps us explore some big questions about change, continuity, causation, sustainability, identity, internationalism, and interconnectedness.