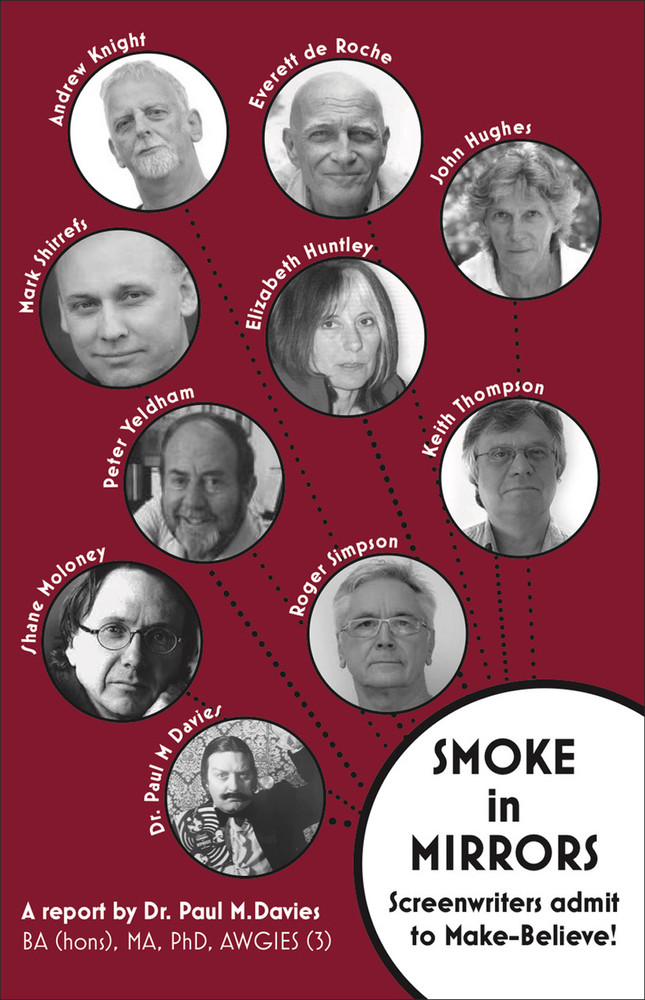 Smoke in Mirrors: Screenwriters Admit to Make-Believe! examines the art of screenwriting through a series of interviews with some of the key players in the Australian film and television industry.

Originally published in Metro, Cinema Papers and Cantrill's Filmnotes, each interview explores the creative process, how each writer gets their ideas and how they manage to put words on a page for the purpose of producing moving images – sometimes with dialogue.

Keith Thompson (The Sapphires, Clubland, Homicide) tries to conjure a 'three dimensional image dancing'. Peter Yeldham (Ride On Stranger, Age of Consent) agrees it's 'all in your mind'. For Mark Shirrefs (The Girl From Tomorrow, Spellbinder) it's about a 'different way of looking at things'. Andrew Knight (Seachange, Rake) strives to get to 'the heart of the matter'. Roger Simpson (Good Guys, Bad Guys, Stingers, Something in the Air) searches for the 'story engine'. John Hughes (What I Have Written, After Mabo) works between 'fact and fiction'. Everett de Roche (Patrick, Long Weekend) claims to be 'only the writer'. For Shane Maloney (Stiff, The Brush Off) the stories are always about 'crime, politics and the girl.' And, Elizabeth Huntly (Neighbours, Something in the Air) quite literally 'hears voices'.

All of the nine writers are talking about the art of make-believe, of 'holding the mirror up' – with sometimes a bit of smoke in the way.

Holding onto Your Vision: The 2007 AWG National Screenwriters' Conference

(Re)discovering Stanislavsky for Actors and Screenwriters

Smoke and Mirrors: Midi Z's 'Nina Wu' and the Cinema of Self-reflection