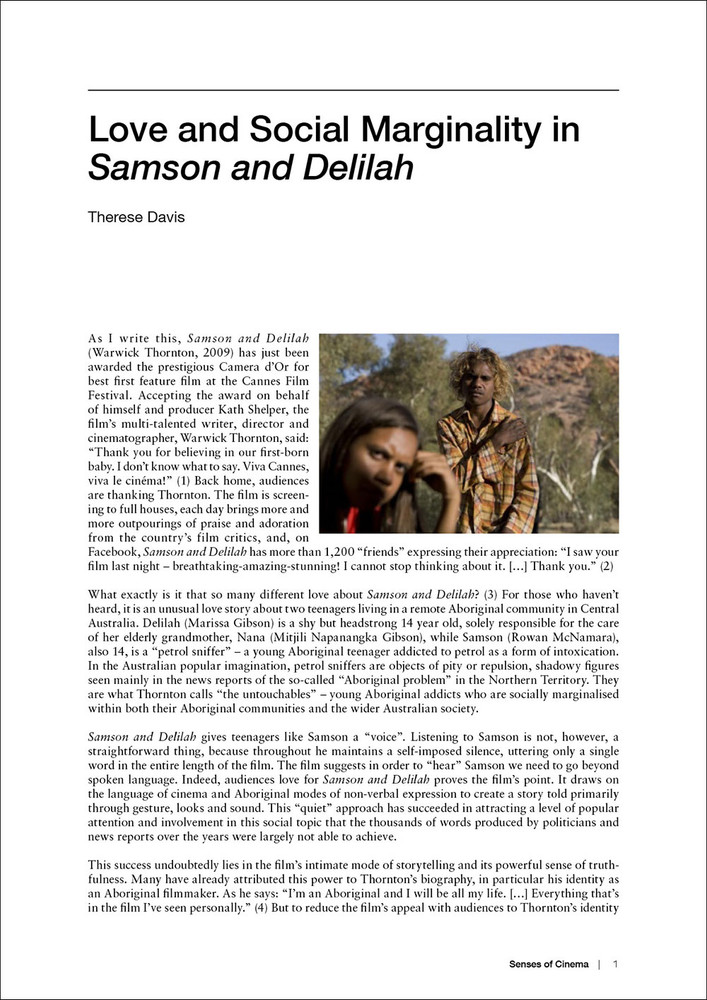 Love and Social Marginality in 'Samson and Delilah'

What exactly is it that so many different love about Samson and Delilah? For those who haven't heard, it is an unusual love story about two teenagers living in a remote Aboriginal community in Central Australia. Delilah (Marissa Gibson) is a shy but headstrong 14 year old, solely responsible for the care of her elderly grandmother, Nana (Mitjili Napanangka Gibson), while Samson (Rowan McNamara), also 14, is a 'petrol sniffer' – a young Aboriginal teenager addicted to petrol as a form of intoxication. In the Australian popular imagination, petrol sniffers are objects of pity or repulsion, shadowy figures seen mainly in the news reports of the so-called 'Aboriginal problem' in the Northern Territory. They are what Thornton calls 'the untouchables' – young Aboriginal addicts who are socially marginalised within both their Aboriginal communities and the wider Australian society.

Samson and Delilah gives teenagers like Samson a 'voice'. Listening to Samson is not, however, a straightforward thing, because throughout he maintains a self-imposed silence, uttering only a single word in the entire length of the film. The film suggests in order to 'hear' Samson we need to go beyond spoken language. Indeed, audiences love for Samson and Delilah proves the film's point. It draws on the language of cinema and Aboriginal modes of non-verbal expression to create a story told primarily through gesture, looks and sound. This 'quiet' approach has succeeded in attracting a level of popular attention and involvement in this social topic that the thousands of words produced by politicians and news reports over the years were largely not able to achieve.

The Sounds of Love and Monotony: Telling Stories without Speech in Samson & Delilah

Said in Silence: Samson and Delilah

Another Country: The World of Samson and Delilah