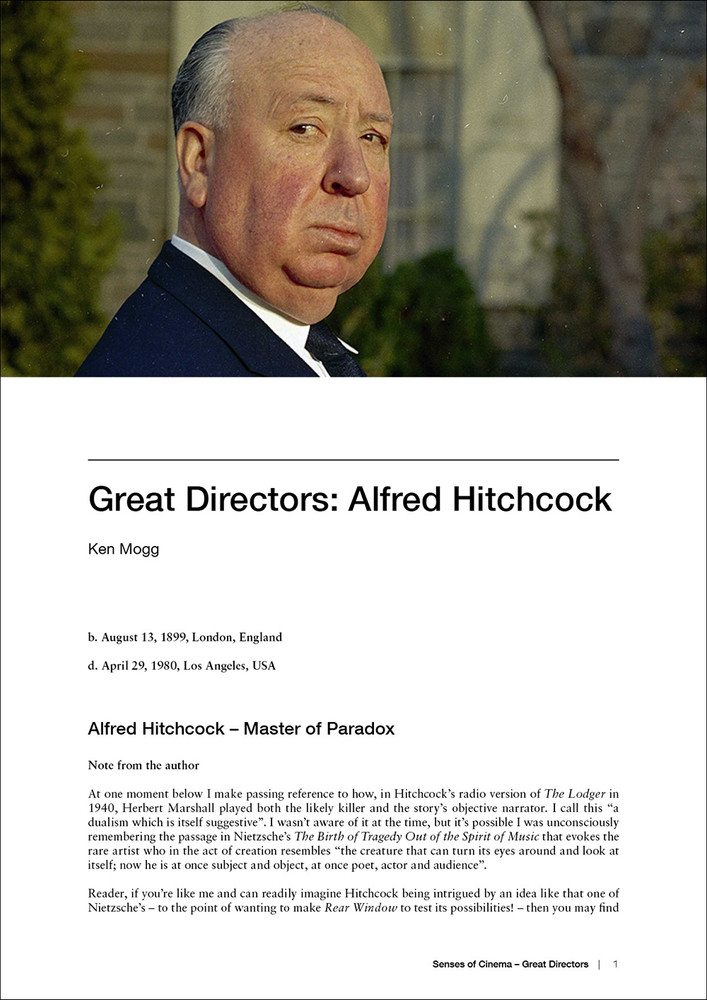 Alfred Hitchcock, destined to make sublime film thrillers, was born in London at the end of the Victorian era. He was the youngest child of an East End family whose father ran a poulterer's and greengrocer's business and whose mother came of Irish stock. The family was Catholic. Hitchcock loved his mother dearly and took after her in her quiet constancy. He grew up an independent youth given to attending films and plays on his own. He also read widely, including works by Dickens, Poe, Flaubert, Wilde, Chesterton, and Buchan. With training in electrical engineering and draughtsmanship acquired at night school while working for a cable company, at age 20 he joined the London studios of Famous Players-Lasky, already affiliated with Paramount Pictures. In these early years he worked under two top directors. The first was an American, George Fitzmaurice, noted for the holistic way he conceived a picture, including its sets and costumes. The other director was Graham Cutts. Cutts' vitality was reflected in both the subject-matter of his films – often emphasising theatrical spectacle – and their mise en scène invoking a sadomasochism of 'the look'. Cutts' influence is obvious in the opening scenes of Hitchcock's first feature, The Pleasure Garden (1925), set in and around a London music hall. But in fact the film was shot in Germany. For a year both men were employed there as part of a deal by producer Michael Balcon of Gainsborough Pictures. Hitchcock seized the chance to observe F.W. Murnau on the set of The Last Laugh (1924). Afterwards, he would describe Murnau's film as an almost perfect example of 'pure cinema' – visual storytelling employing a minimum of title-cards.

Through the Peephole: Alfred Hitchcock and the Enduring Legacy of Psycho