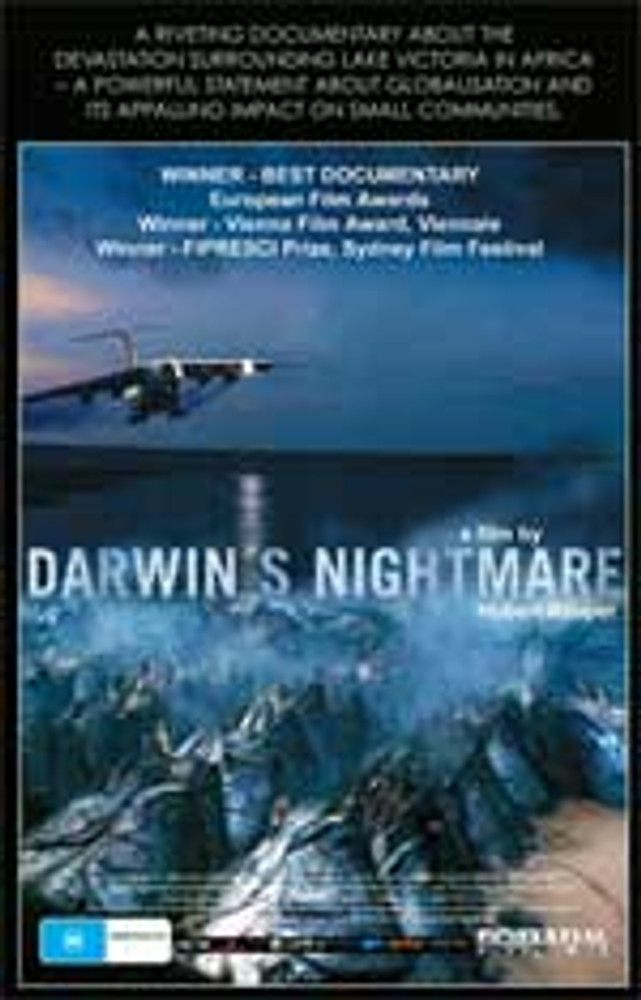 A riveting documentary about the devastation surrounding Lake Victoria in Africa a powerful statement about globalisation and its appalling impact on small communities.

<i>A SHOCKING REMINDER OF HOW WHAT DARWIN CALLED THE SURVIVAL OF THE FITTEST DEPENDS ON THE EXPLOITATION OF THE LEAST ECONOMICALLY PRIVILEGED</i> - Tom Dawson, BBC.

Picking up awards at film festivals around the world, the latest being the <b>FIPRESCI (International Critics)</b> award at Sydney Film Festival, DARWINS NIGHTMARE is that rare thing in documentary filmmaking; it is formally captivating with fascinating subject matter. The fact that Sauper spent years investigating and gathering footage for his film shows in the depth and clarity of this work.

Hubert Saupers acclaimed documentary is a compelling cautionary tale that clearly shows how, in this age of globalisation, things can easily evolve in the worst possible of unforeseen ways. Back in the 1960s someone poured some non-native fish into Lake Victoria. The profoundly predatory Nile Perch was far bigger than its native rivals and, in killing off most species, also had a deleterious effect on the human population: farmers moved to the lake to become fishermen and satisfy the European and Russian demand for fish, which in turn caused massive economic change, sickness, poverty and, inevitably, political skullduggery.

<i>"Witty, provocative, angry and heart-breaking, this incisive, imaginative film ranges wide in the subjects it covers. Filming undercover gave Sauper access to an impressive array of people, from businessmen and pilots to prostitutes and EU politicians, some of them alarmingly frank in their admissions. Less an exposé of corrupt individuals than a terribly lucid investigation into mankinds mad capacity for (self-)destruction, its a film that will surely prick the conscience of all who see it."</i> - Time Out, London.

In the Heart of Darkness: The Environmental Endgame of Darwin's Nightmare